Columns
The Voice
From Where I Sit – Buddy, part 2

Why is it that after publicly sharing my grief at the loss of a family pet I feel compelled to further explain? Readers may recall that recently my family’s twelve-year-old pooch named Buddy passed away after a very brief illness.

I previously shared my perspective on end-of-life-issues, pain, suffering, and grief. The gamut of thoughts and emotions one goes through is remarkably similar to those experienced by those grieving a human death.

Between us, Roy and I have lost three parents, so grief is not something new to us. We know about the shock of receiving “the call” advising us of a death. And no matter how expected death eventually becomes in relation to the sick and the elderly, it’s still a shock. And no matter that death eventually becomes a welcome release from earthly cares and unrelenting pain for the deceased, it causes new pain for the survivors.

There are decisions to make — autopsy or not, which funeral home, take Buddy home or not, etc. Deciding who and how to notify people is the next job. Retelling the details of the end becomes second nature, tearful but perhaps cathartic too. Being touched by some people and sadly disappointed by others is another eye-opener and lesson in human behaviour. Just how much grief can you express before you begin to wonder about the reaction of others? You quickly learn who is capable of and comfortable with feeling your sorrow and who thinks you should be snapping out of it by now.

Logically you know there are always cases more tragic than your own. As we mourned Buddy’s death, family and friends mourned the death of Liana White and other individuals mourned the death of the victims of the London bombings or the death of countless others. Only someone who has loved and lost a pet can understand the very real sense of sadness and loss. I’ve been struggling to “put things in perspective” because after all, “he was only a dog.”

Maybe the single biggest difference between losing a pet and losing a human being is that there is no muddying of emotions with the pet. Buddy loved us unconditionally. He didn’t judge us or hold a grudge. We didn’t have a fight followed by not speaking for days or years, as humans are wont to do. We didn’t exchange harsh words or say something hurtful. We didn’t have regrets about things done or not, said or not. There is no guilt associated with Buddy’s death.

Anyone grieving knows of the difficulty with disposing of personal effects, handling certain significant days, or being knocked down with grief at sensory reminders like the smell of a person’s shirt or the sound of a voice on an answering machine. So too with a pet’s death. As we come across another toy under the sofa or a trio of dog sweaters put away for the summer, memories come flooding back and with them sorrow.

Oh, sure we talk about the good times, we rationalize the end of pain, we thank God for the gift of his presence, but for now at least, we still hurt. It’s a helluva thing, from where I sit. 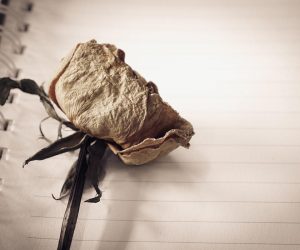