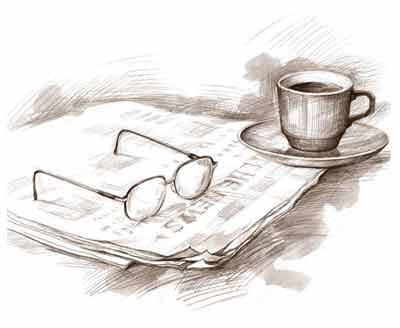 Imagine you’ve won the lottery. You’re looking for a good place to invest your million dollars but, unfortunately, your search isn’t going well. Not a single broker you’ve talked with has given you all the facts, and some have outright lied. Most of them even work for the same company, a situation that’s hardly conducive to ensuring you a fair choice. As a consumer, you’re discouraged, distrustful, and your money is still at home, stuffed in your mattress. Then, on the horizon, you spy a new group of brokers. We’re honest, they say. You can trust us. We’re independent and, believe it or not, aren’t even that interested in turning a profit. So, do you run out and hand over your winnings?

Like most people, you’ll probably never have to make this fictional decision, but there’s a similar–and very real–dilemma facing all of us today. One in which, arguably, there’s a lot more at stake than a million dollars. Today’s mainstream media is akin to the first group of brokers. On the surface, a wide variety of voices give you the facts you need to make informed decisions about the world (or your lottery winnings), but a closer look reveals huge conglomerates that own hundreds of small community newspapers, along with television stations, magazines, and Internet holdings. As with any commodity, the company’s final product (your daily paper or nightly newscast) has been filtered to conform to the demands of those selling that product: advertisers, shareholders, and the corporation itself.

The argument can be made that news shouldn’t be a commodity, but that’s exactly what it’s become (for a comprehensive list of who owns what in Canadian media, check out Your Media at http://www.yourmedia.ca/library). One example is Quebecor, with 17 daily newspapers, 71 community papers, plus various television stations, Internet sites, and magazines. Both here and in the U.S., media empires are worth billions, a pretty sure sign that someone’s selling a product and someone else is buying it.

So, given that the lone head of a corporation holds the power to dictate the editorial content of several newspapers across the country (CanWest Global, anyone?), can your local daily news source be considered independent? And when Product X turns out to cause cancer, do you really trust the television stations under its corporate umbrella to report on that product’s shortcomings in a fair and unbiased way?

This brings us to the second group of ‘brokers’, the self-titled independent media outlets. Their claim to fame is that they’re anti-commercial and non-profit, that they’re not beholden to the interests of corporations or governments and therefore are free to report what they want when they want. Just like the mainstream media, these organizations boast experienced writers and editors, many of whom have won awards for their journalistic contributions. A shortlist of these outlets includes The Dominion, Straight Goods, Independent Media Centre, COA (Currents of Awareness), FAIR (Fairness and Accuracy in Reporting), the NewStandard (the flagship publication of PeoplesNetWorks), and Inter Press Service. Some sites that provide television broadcasts are Democracy Now and Independent World Television. Common themes run through most of these sites’ mandates, the main ones being diversity and credibility. FAIR’s bimonthly magazine, Extra!, sums it up as a look at “the major issues in the news, questioning the conventional wisdom that narrows the range of issues, sources and perspectives. Articles examine biased reporting, censored news, media mergers, press/state cronyism, the power of corporate owners and advertisers, and the exclusion of progressive voices from the media.”

On the surface, this is all well and good, but the original question remains: should you accept the independent media at face value, trusting them to provide honest, open access to information simply because they’re an alternative to the corporate-owned sources? In short, how quick should you be to hand over your million dollars?

First, consider this: suppose that an independent newspaper has caught on. They’re selling subscriptions and their customers enjoy the hard-driving, investigative journalism that exposes government corruption, corporate fraud, and human rights issues. But what happens when big business or the government does something positive, something fiscally or environmentally responsible? If the independent media reports these stories on a regular basis, do they risk alienating their readership and, consequently, their livelihood? Is it ever possible for any media provider to be truly independent of the influence of the groups supporting them? The answer to that question is a qualified yes.

“Freedom of the press is limited to those who own one.” Journalist A.J. Liebling is partially right, but conscientious writers and editors do exist, people who are passionate about the unfettered flow of information that forms the heart of a democracy. So who’s responsible for fostering that environment, for holding the media to account and questioning who is filtering the news that informs our world and shapes our decisions?

We are. Any news provider, indie or corporate, can proclaim their even-handedness and credibility. Ultimately, though, it’s our responsibility to be informed consumers. Check out news coverage at both ends of the spectrum: mainstream media, independent presses, and those in between. Are they covering a wide variety of issues, albeit from different perspectives, or are certain topics consistently absent from one source or another? The answers you get may surprise, anger, or enlighten you.

With the growing proliferation of different media voices, exciting new opportunities are all around us, opportunities that have the potential to ensure the existence of unfettered, equitable news sources. Whether they’re well established or a fledgling press, their most valuable contribution has already been made. It lies not in the details of individual stories, but as a reminder to question what we’re being told and who is telling it to us.

If nothing else, inspiring readers to thoughtful, open-minded inquiry is proof that a thriving, independent network of news and information is possible. The only question now is, will we be bold enough to reach out and take it?

Editorial—A Day for Everything, and Everything in its Day

Discover What Excites You