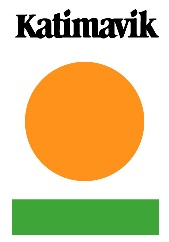 He has only been gone for two days but already I call him Katimerik. His journey holds the promise of new places, new friends and countless surprises. For me, the first one came before we had even put him on the plane.

My son’s nickname comes from Canada’s Katimavik program and he is one of the fortunate young men and women who will spend the next nine months of their lives living and working in their own small household communities. They will work as volunteers in exchange for the opportunity to live in different parts of the country, learn a new language and develop communication and conflict resolution skills that will last them a lifetime. His name is Erik and the moniker I’ve given him springs from the quirky habit some participants have of prefacing even the most common objects with ‘Katim’ – Katimabus, Katimabed, Katimastove. Thus, he is Katimerik.

The whole business started innocently enough the day the first small white envelope arrived, its bright orange and green logo nestled in the corner. That night, Erik came out of his room bearing a letter in his hand and a surprised smile on his face. “It’s my initial acceptance letter,” he said. “The next group leaves in September.” I was thrilled. Not just for his opportunity to travel across Canada, or the chance to develop new life and work skills he might not otherwise have a chance at. For me, there was more to it than that.

As a parent, I have always believed that one of my biggest responsibilities is to make sure that my children grow up to be independent individuals capable of making their own way and contributing in a positive way to whatever community they choose to live in. England, China, Timbuktu – the choice was theirs, so long as they followed their hearts and were happy.

As youngsters, they learned at an early age how to pay for something they had chosen at the store and to count the pennies in their small hands to make sure they had the right change. When their signatures became close to legible, the day came for a trip to the bank where they painstakingly scrawled their names on the card that meant their accounts were all theirs. No more waiting for mom’s permission to withdraw five or ten dollars and get that all-important He-Man action figure they’d been saving for.

At last he would have the opportunity to spread his wings, to experience new places and new people. To see the country and learn more about himself and, perhaps, to discover where it is his dreams and desires will take him. With this trip, my son would be taking his first serious steps down the road to independence.
We were excited but cautious. Before he was officially accepted into the program there were several hurdles to clear. First the medical exam, then the police records check. Anxiously, I waited with him through each step in the long application process.

Finally, the large brown envelope bearing the now-familiar logo arrived. Everyone in the house eagerly devoured the pages of travel instructions, electronic plane tickets and assignment details. The phone rang off the hook the last two weeks before his trip, organizing farewell parties and impromptu trips to the local doughnut shop to hash over the details.

And then it happened. His bags were packed, the posters taken off the wall and only a few shirts hung forlornly in his closet. Suddenly, I realized the one small detail that had been forgotten in all the preparations. I, who had spent years preparing my children to leave the nest, had somehow forgotten to prepare myself for the day they would finally take flight. His departure was still a week away but already the house was too empty, the sound of his step on the front porch a fading echo. Independence? Forget about it. I wanted nothing more than to unpack his bags and keep him safe and sound in his familiar room.

But as the old saying goes, if you love something set it free, so his plane has long since disappeared into the clouds and my son is settling in with the group who will be his housemates for the next nine months. Will he reminisce on it as one of the most amazing, profound experiences of his life? Only time will tell how this work in progress will end, but one thing is for sure. The learning process continues–for mother and son.