Since I have lived in British Columbia, one of the things that has become synonymous with Fall for me is walking through rain saturated forests in search of wild mushrooms. This annual autumnal ritual is something that my husband introduced me to on a weekend trip to the West Coast of Vancouver Island. After fifteen years have passed, I still remember the taste of those delicate-flavoured chanterelles stirred in with cream sauce and poured over the top of pasta.

As micophiles know full well, the lavish downpours that accompany Fall, especially on the West Coast, bring out an incredible floor-level banquet waiting to be harvested and enjoyed. However, picking and eating wild mushrooms is not something you want to try unless you are absolutely certain you know what to look for. You should know that many of the fungi you come across are absolutely deadly to ingest, and unfortunately they can smell and even taste delicious. You won’t know that anything is wrong until the toxins kick in!

As mushroom expert Michael W. Beug explains, one particularly noxious species is amanita muscaria. “Because it is abundant, large and beautiful with a pleasant taste,” he explains, “many people eat Amanita muscaria each year…in error and wind up experiencing intoxication, nausea, muscle spasms, staggering, vomiting and diarrhea usually followed soon by a deep coma-like sleep and recovery within 24 hours” (Beug, 2005).

Fortunately, there is a wealth of information out there, such as well-illustrated pocket book guides and web sites, to help you differentiate the delicious from the deadly. Even so, however, many of the species look very similar to the untrained eye, so it’s best not to take any chances. I certainly don’t advocate my husband’s approach, which involves taking a nibble of any species that he has not seen before, waiting a day or so, and then (assuming there no ill-effects) tossing them liberally into his food. As he points out, so far he’s still alive, but it’s probably not the soundest technique. The best bet, by far, would be to take along somebody with lots of experience as a guide.

If you don’t fancy taking the gamble of picking the mushrooms yourself, there’s a selection of the morsels waiting for you at the local produce store. Try picking up a bag or two of morels, porcini, matsutake, Portobello, shiitake, or lobster varieties, any of which work well in omelettes, stir fries, mushroom and potato soup, or a thousand and one other recipes. 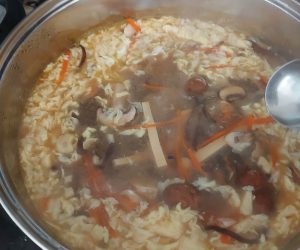