Articles
The Voice
You can’t hurry love, but you can rush the flowers 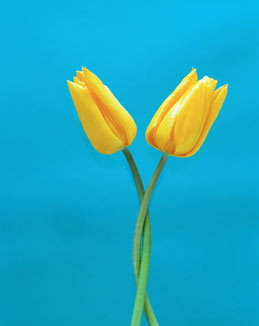 I’ll admit it. When I read the article about an online service that claims to make “romantic gestures” (Harris, 2005) on other’s behalf, my first thought may have been a bit judgmental. I thought, “Pay someone to send your wife flowers? (scoff) Thanks for the sincerity, sweetie.”

Yet, intrigued, I decided to read on. SaveMyAss.com caters to people (so far mostly men, making up 99 percent of the clientele) who would like to send “thoughtful” gestures to their loved ones on a more regular basis. For a starting price of $59 (US), the company can send flowers every four to six weeks, as well as ensure flowers are sent on anniversaries, birthdays and other special occasions. You sign up and then SaveMyAss.com will email you a few days prior to delivery to “keep you in the loop” (Savemyass.com, 2005). You can also press a panic button that allows you to send a bigger arrangement, in case you’ve found yourself in hot water that week.

The website is oriented toward men, which is fitting considering the demographic of their clientele. However, the company claims their service can be used by anyone for anyone in the US or Canada. In the meantime, however, a banner at the top of the home page says “Gentlemen, Welcome to SaveMyAss.com” and there is a list of questions, one being, “Will she be upset if she knows I’m using this service?”

The answer to this burning question reads that the feedback has been “counter-intuitive”, that most women are pleased that their men are making an effort at all. They know their husbands “well enough to recognize [they] are busy” (Savemyass.com, 2005), and are happy that, at least, they’re getting flowers.

Such an answer may be accurate, but it seems a little misleading. It implies that flowers can smooth things over. The website’s name and the added feature of the panic button also imply this assumption. Flowers are generally not enough to solve problems. It may work the first few times, but after the fifth bouquet of roses, it’s likely the flowers have lost their appeal. With the four to six week schedule, perhaps the flowers are meant to be more a preventative medicine than a cure. Most people like flowers. But, do they like them because they want flowers, or do they like them because it means someone thought of them and took time out of their day to do something thoughtful like that? The whole notion behind the service seems to emphasize that getting things means caring, and suddenly, it’s not the thought that counts anymore.

The tone of the website is casual and aloof, as is inferred by the name. The co-founders joke that they are “(self-proclaimed) cool and trustworthy guys.” The tone gives the impression that we are not to overanalyze this service. It’s guys simply sending flowers. “It’s more guys who want the convenience but actually do care,” says Al Lieb, one of the co-founders (Harris, 2005). Clinging to my (self-proclaimed) idealistic beliefs, I read on. Business Week has a short article on the service. James Hong claims, “Guys–even well intentioned guys–need a nudge” (Savemyass.com, 2005). The idea is that you are supposed to be pleased he thought of you at all. In the signing-up, you’ll find the sincerity.

The co-founders seem pretty realistic about their intentions. They are aware that their service can offend people, or at least, may be better left private. That’s why they have “SMA flowers” appear on your credit card statement instead of “SaveMyAss.com.”

The website launched in September 2005. The success of this is yet to be seen. I know if I suddenly get flowers every four to six weeks, I’m going to be asking some questions. But, for those of you in need of a reminder, there’s plenty of time to sign up before Valentine’s Day. And you thought romance was dead.