Columns
The Voice
The Good Life – The Reasons for Learning

About seven years ago, I signed up for a sign language course being offered through a local community college. The course instructor was a vibrant, extroverted type of person with a theatrical flair and the ability get everyone in the class involved in the experience. Learning took place by means of a variety of games and activities that involved miming, making faces, being aware of body language, and other things that improved our observational and communication skills. Above all, we learned how to pay proper attention to others and to not be afraid of making fools of ourselves. There is something extremely liberating about standing in front of a group of twenty or so individuals and twisting your face into a series of off-the-wall expressions. The course also gave me insight into and appreciation of the vibrant deaf community in Vancouver — a community that up until that point I had only been vaguely aware of. Overall, it was one of the most enjoyable educational experiences I’ve ever had.

Besides the advantages of expanding my personal horizons, something that inevitably comes from learning another language, taking this signing course had two unexpected and immensely enjoyable benefits. The first was that I met a woman, a speech pathologist named Janine, who would become one of my very closest friends. The second benefit was that I was able to use sign language as a tool for teaching communication skills to my daughter, who was a little less than a year old at that time. To this day, we still occasionally use sign language to talk across a crowded room.

An interesting side issue that arose out of taking this course was the fact that many people didn’t seem to understand why I was devoting so much time and energy to studying it. Whenever I told friends and acquaintances that I was learning how to sign, they would (not surprisingly) ask me why. When I told them it was just for my own general interest, they would give me a sort of puzzled expression. Some of them would press me further, saying “yes, but what are you planning to do with it.” It was as though learning a new skill were something similar to acquiring a new gadget or appliance — there has to be some use for it. They wanted to know whether I was planning on starting a new career in speech pathology or something like that. When I explained to them that my sole interest for taking the course was in order to learn a new language and learn about something I hadn’t been previously exposed to, they were polite in their interest, but I could sense that many of them were a little perplexed by this notion.

It seems to me that it is a deeply ingrained idea in the minds of most of us, at least up until a certain age, that education is a means to an end. We go to high school so that we can graduate and get a job or else move onto university or a trade school. We might learn specific skills such as auto mechanics for instance, so that we can save ourselves some money, or with some other specific objective in mind.

It is only very early or very late in life that the majority of us venture out into some new avenue of learning with the sole reason of opening ourselves up to a new experience. Children, of course, are very eager to learn new skills and embrace new ways of seeing the world. And the same goes for many elders. My husband runs various storytelling and creative writing workshops for senior citizens through community centres. The elderly people, who attend these groups and other classes and activities, are often very energetic in their creativity and fearless in their participation. They become involved in trying something new without any thought of future economic benefit. They do it because it keeps them feeling young and involved in life.

They have remembered what too many of us have forgotten: learning is not simply a means to an end, it is one of the very best things about being alive. 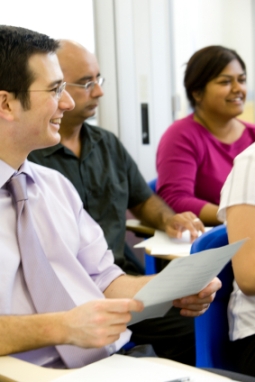