Columns
The Voice
Turning the Pages – I’m Working on That, by William Shatner

This week, I did a lot of homework. A lot of it was research for a paper on the development of technology, so I happened to come across an interesting non-fiction work by William Shatner entitled I’m Working on That: A Trek from Science Fiction to Science Fact.

Shatner, best known as Captain Kirk from the original television series Star Trek, is emphatically not a scientist, yet this book takes on the challenge of describing many cutting-edge technologies and the theories behind them. Many of the scientists he interviews were kids in the late 1960s when Star Trek was on the air. They were inspired to improve the world and its technologies by the futuristic science they saw on their TV screens.

If you, like Shatner, know absolutely nothing about science, you may find this book interesting and informative. He often repeats throughout the book that he does not understand technology, is not a scientist, and doesn’t understand the theories that he explains (though the book was reviewed by the scientists he interviewed for accuracy). If you have any knowledge of science (for example, if you’ve ever read an issue of Scientific American or Discover magazine) you may find this text horribly oversimplifies some pretty complex theories and ideas. It’s rather like reading your son’s or daughter’s grade four science text in that it’s accurate, mostly, as far as it goes, but it doesn’t go far enough.

Personally, I found the book condescending. Its constant repetition of the theme “I don’t get this, and so you won’t either, but here are the broad outlines of the idea” was insulting in the extreme. It does touch on some interesting science, though not in nearly enough detail. Shatner’s constant references to his days in the captain’s chair on the Enterprise seemed cute at the beginning of the book, but by the end of it, I was thinking “enough already!” I was even such a Trekker in my teenage years that I was a member of a fan club (Star Trek Winnipeg) and held a “commission” as a lieutenant aboard a fictional starship. If I found it tiresome, how must non-fans of Star Trek feel?

To be fair, Shatner’s television program How William Shatner Changed the World aired November 13, 2005 on the Discovery Channel. The show presented most of this same information in a much more appropriate way. Most of the condescension in the book came across as cute, funny, and approachable in a more visual medium, though the surface-level analysis still made me cringe.

I wouldn’t recommend this book, unless you dropped out of high school in grade nine and for some reason want to learn about what’s happening at JPL and other high-end labs. If you stuck out grade eleven science courses, you probably know more about what’s going on in the high-tech world than Shatner does.

To each his own, there’s probably an audience for this book out there someplace. But I’m not it. 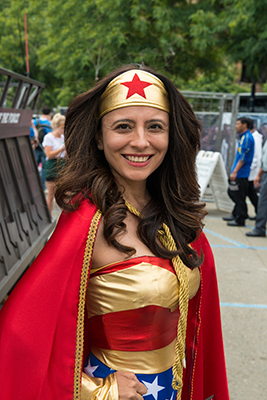 The Evolution of a (Reluctant) Geek Mom