Articles
The Voice
The Grey Zone 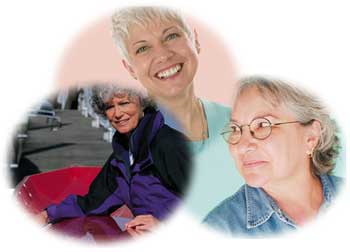 We are unwilling allies, the smiling woman and I. At our bi-monthly meetings, she never fails to beam happily at me, a fit, healthy and apparently wealthy icon of youth and beauty. She is number 837, Natural Golden Brown, and with each appointment that I keep, I become ever more determined to cut her out of my life.

You’d think it would be simple for someone like me, a quick severing of old unwanted ties. I eschew the cult of youth in favour of a steady, comfortable march toward middle age. Britney, Christina and Beyonce do not blare from my car stereo. I celebrate a broader array of music and the arts, one that has taken many years of patience and experimentation to appreciate. The one-dimensional, disposable fashions (musical and otherwise) that the advertising gurus push as the accoutrements of being young, hip, and desirable are not for me. Neither do I indulge in girls’-nights-out, those shrieking, tipsy, mini-skirted bonding rituals that so many women of a certain age seem to require as reassurance of their ability to attract the attention of strange men in bars.

So why this frustrating reluctance to just let go, to say to the world that yes, I have grey hair and I really don’t care? Age is not an issue for me and I’ll happily announce that I’m forty-two to anyone who asks. Money has little to do with the equation either. I’m not a beauty queen or movie star, and my looks have never been a factor in my ability to earn a living.

I don’t really know the answer to this question, but one thing I’m sure of is that I’m not alone. One manufacturer of cosmetics and hair care products estimates that as many as 40 percent of women and 5 percent of men colour their hair. Sure, a lot of people have fun changing their hair colour as part of their wardrobe or to experiment with their image, but a quick look at the drugstore shelves shows that at least half of the boxes there exist for one reason and one reason only — to cover that unsightly grey.

I’ve even heard that one of the many trendy pastimes of the rich and beautiful is to have the grey hair on their pets dyed into oblivion. Apparently, if an Alsatian has the audacity to develop a grey muzzle, it’s a direct reflection of its owner’s decline in youth and associated power. The adage about having more money than brains comes to mind, but I think the truth of the matter lies deeper than that. I think that no matter how intelligent, rational or discerning we may be, the constant assault of youth-as-perfection can’t help but affect us. Young is good, and old is bad. Flawless skin is desirable, and wrinkles are a flaw. It saturates our sensibilities through billboards, television — actually, just about any media you can name — until, unlike the Argonauts protected from the wail of the Sirens, we succumb.

Sometimes I hold off as long as possible, watching with grim resolve as the silver roots grow longer, determined that this time I’m going to beat the urge to buy into the bill of goods society has sold me. And I do hold off, standing firm until some wag remarks in surprise, “Wow, I didn’t know you have so much grey hair!” It’s times like these that always seem to find me at the hair salon, black-caped and mesmerized, as I watch the short, even snips falling like some sort of mutant rain. It’s then that reality sinks in, the stark glare of pure white ending abruptly where it merges with a length of Natural Golden Brown. There is a distinct demarcation point, like the shocking pallor of a foot that’s remained sock-clad and virginal all summer, while the leg above it has been allowed to mellow into a golden semblance of the sun’s rays. The contrast can be startling.

If truth be told, it’s not the grey-free twenty-year olds I envy. It’s the women I occasionally glimpse in the shopping mall or on the street, the ones sporting thick, rebellious coifs of snow-white or steel-grey hair, the ones who don’t dye and probably never have. The ones who, no matter what their age, have accepted their maturing hair colour as part of who they are, of who they’ve grown to be, and don’t give a damn what anybody thinks.

One day, I’ll be one of them. I will finally have let go of my one last, lingering preconception of what it means to be attractive in a world that places such a premium on something none of us, no matter how rich or powerful, will ever achieve — eternal youth. In the meantime, I’ll continue to meet my smiling friend in the aisles of the nearest drug store, and together we will wash that grey right outta my hair. And until that day comes, it’ll be our little secret.