Columns
The Voice
Dear Barb – The Meaning of Christmas 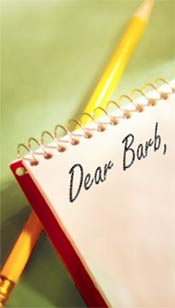 Thanks to everyone who wrote in this year with questions. I hope I have been able to help some of you. I’d like to end the year with a story I found online. It is a story about the true meaning of Christmas. Some of you may have read this story, but I think it”‘s a story that could be read every year to remind us of what Christmas is all about. Merry Christmas – Barb

Just a week before Christmas, I had a visitor. This is how it happened. I had just finished the household chores for the night and was preparing to go to bed when I heard a noise in front of the house. I opened the door of the front room, and to my surprise, Santa Claus himself stepped out from behind the Christmas tree. He placed his fingers over his mouth so I would not cry out.

“What are you doing?” I started to ask, but the words choked up in my throat as I saw he had tears in his eyes. His usual jolly manner was gone. Gone was the eager, boisterous soul we all know.

He then answered me with a simple statement, “Teach the children.”

I was puzzled. What did he mean? He anticipated my question and with one quick movement, brought forth a miniature toy bag from behind the tree.

As I stood there bewildered, Santa said again, “Teach the children. Teach them the old meaning of Christmas -“? the meaning that Christmas nowadays has forgotten.”

I started to say, “How can I…” when Santa reached into the toy bag and pulled out a brilliant shiny star.

“Teach the children that the star was the heavenly sign of promise long ages ago. God promised a savior for the world and the star was a sign of the fulfillment of that promise. The countless shining stars at night (one for each man) now show the burning hope of all mankind.”

Santa gently laid the star upon the fireplace mantel and drew forth from the bag a glittering red Christmas tree ornament. “Teach the children that red is the first colour of Christmas. It was first used by the faithful people to remind them of the blood which was shed for all the people by the Savior. Christ gave His life and shed His blood that every man might have God’s gift of Eternal Life. Red is deep, intense, and vivid. It is the greatest colour of all. It is the symbol of the gift of God.”

“Teach the children,” he said as he dislodged a small Christmas tree from the depths of the toy bag. He placed it before the mantle and gently hung the red ornament on it. The deep green of the fir tree was a perfect background for the ornament. Here was the second colour of Christmas.

“The pure green colour of the stately fir tree remains green all year round,” he said. “This depicts the everlasting hope of mankind. Green is the youthful, hopeful, and abundant colour of nature. All the needles point heaven-ward, as symbols of man’s returning thoughts toward heaven. The great green tree has been man’s best friend. It has sheltered him, warmed him, and made beauty for him.”

Suddenly, I heard a soft tinkling sound. “Teach the children that as the lost sheep are found by the sound of the bell, it should ring for man to return to the fold. It means guidance and return. It further signifies that all are precious in the eyes of the Lord.”

As the soft sound of the bell faded into the night, Santa drew forth a candle. He placed it on the mantle and the soft glow from its tiny flame cast a glow about the darkened room. Odd shapes in shadows slowly danced and wove upon the walls. “Teach the children,” whispered Santa, “that the gentle candle shows man’s thanks for the star of long ago. Its small light is the mirror of starlight. At first, candles were placed on the trees. They were like many glowing stars shining against the dark green. The coloured lights have now taken over in remembrance.”

Santa turned the small Christmas tree lights on and picked up a gift from under the tree. He pointed to the large bow and said, “A bow is placed on a present to remind us of the spirit of brotherhood of man. We should remember that the bow is tied as men should be tied, all of us together, with the bond of goodwill toward each other. Goodwill forever is the message of the bow.”

As Santa looked around the room, a feeling of satisfaction shone in his face. He read wonderment in my eyes and I am sure he sensed admiration for this night.

He reached into his bag and brought forth a large holly wreath. He placed it on the door and said, “Please teach the children that the wreath symbolizes the eternal nature of love; it never ceases, stops or ends. It is one continuous round of affection. The wreath does double duty. It is made of many things and many colors. It should remind us of all the things of Christmas. Please teach the children.”

* The author of this work is unknown and research indicates that it is a historical work in the public domain which has been translated into both songs and written works in various formats.

E-mail your questions to advice.voice@ausu.org. Some submissions may be edited for length or to protect confidentiality: your real name and location will never be printed. This column is for entertainment only. The author is not a professional counsellor and this column is not intended to take the place of professional advice.