This column focuses on a wide range of issues affecting post-secondary students. Students are encouraged to submit suggestions and educational topics they are concerned about, or personal experiences with courses or university situations they feel other students should know about. If suggest a topic or a course alert for taking notes, contact voice@ausu.org, attn: Debbie Jabbour

The first national census of PhD recipients in Canada, Statistics Canada’s Survey of Earned Doctorates, has revealed that of 3600 doctoral graduates produced last year, one in five say they plan to leave Canada to work or to continue studying. Life science and physical science graduates were the most likely to leave the country, accounting for one in three PhD graduates in these programs. Although the good news is that of those grads intending to leave Canada, almost half say they plan to return, this may not be enough to sustain Canada’s universities. With a 9.5 percent decline in doctorates awarded and a need to replace up to 20,000 retiring professors in the next decade, Canadian universities are facing a serious shortage of professors.

Foreign students represent nearly one-quarter of all doctoral graduates, and are the most likely to report plans to leave Canada. With countries like India and China able to retain their own PhD grads and lure students back who study overseas, greater pressure is being placed on countries like Canada to produce even more PhD graduates.

On average, doctoral graduates were about 36 years old, and took almost 6 years to complete their programs, with those in humanities and social sciences taking slightly longer. About half were able to finance their studies with scholarships, or teaching or research assistantships, and among those who did incur debt to finance their graduate studies, 41 percent owed less than $10,000, and 32 percent owed more than $20,000 (Schmidt, 2005). 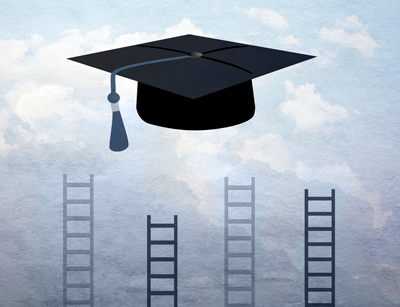 There Is No Impossible For Us