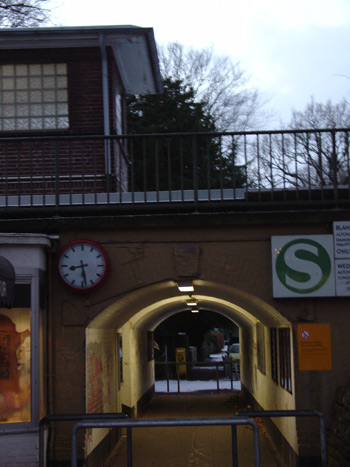 Hamburg is a city of about two million people, and everyday its buses, S-Bahns, and U-Bahns move hundreds of thousands of people with great efficiency. Yet, the transit system is not without problems. I first started to question the German reputation for timeliness after my experiences with the number 21 bus.

The walk from our student apartment to the bus stop where I meet the 21 takes exactly seven minutes. We know this because the Hamburg transit authority website has calculated this for us.

Typically, when I arrive at the stop, a couple of people are already waiting beside the shelter. And typically, after a considerable quantity of time has passed, more people join the wait.

Eventually, we potential bus riders are all in danger of being late for school or work, but we have a more immediate danger to worry about. A bicycle path runs along the narrow sidewalk in front of the bus shelter and offers the first hazard of the day for commuters. Suddenly, and in unison, everyone steps back to avoid a speeding bicycle. Cyclists can be merciless when pedestrians wander into bicycle lanes, so we are all fortunate that we had time to get out of the danger zone.

The wait for the bus continues. More people arrive at the bus stop, and we all realize that the bus is undeniably late. Only the lone Canadian obsessively checks his watch. The other people do not seem to be annoyed. Perhaps they even expect this. I can only conclude that German punctuality is not what it used to be.

Eventually two buses — Mercedes Benz products no less — show up together, but only one stops to collect the, by now, formidable crowd that has collected at the bus stop. Both sets of doors open and most people enter the centre doors of the bus.

As it is about 8:00 a.m. and no one is checking for tickets or transit passes. Routinely, this is only done after 9:00 p.m. and on Sundays, though random checks may be carried out at any time. Fortunately, there are no such checks today. The bus is too crowded for me to reach into my backpack without injuring other passengers.

The bus continues along its route, zooming along a tree-lined street. This is a residential neighbourhood, but from the road, it looks like a forest, although I am not enjoying the view today. The bus is crowded, and I am unable to reach anything for support. I feel somewhat nauseous every time we make a turn. When we reach the final stop at the Klein Flottbek train station, an automated voice wishes us a good day. Then the doors open, people squeeze out of the packed bus, and almost all of them head towards the ramp that leads into the S-Bahn station.

Having survived the bus ride, users of the public transit system face new obstacles at the train station. On Saturday, Sunday, and Monday mornings, before the cleanup crews have arrived, it is possible to see evidence of the previous night’s excesses. Early morning travelers must occasionally avoid vomit on the stairs or train platform.

On this particular morning, however, there are no such hazards, and a more or less orderly procession heads towards the platform, but abruptly the pace changes. Somehow, like migratory birds, the Germans seem to know instinctively when to walk and when to run to the train platform. Perhaps the person at the head of the line hears a train in the distance, catches a glimpse of an approaching train, or out of an instinct developed from generations of train travelers senses an approaching train, and breaks into a run. Instantly, everyone who can run does so. Men and women in business attire, students with backpacks and skateboards, and parents with baby carriages join the race towards the train platform. 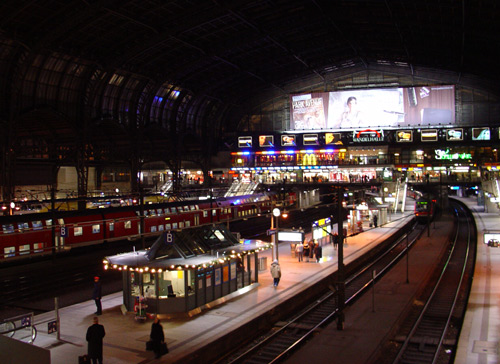 This surging crowd is actually rather dangerous, given that this train station is undergoing renovations at the moment. Half a dozen workmen flatten themselves against a wall in the face of the advancing hoard. The men on top of the scaffolds, clinging to their perches, look especially apprehensive.

The racing travelers continue to scramble up the stairs and through the open doors of the train, with no time to spare. Overhead, a voice warns the people standing on the platform to stand back, a whistle blows, the doors of the train close, and the train starts off into the Hamburg rain, through Othmarschen, Bahrenfeld, Altona, Holstenstrasse, Sternschanzen, Dammtor, and points beyond.

Eventually, I decide that it is more efficient and less stressful to walk to the Othmarschen S-Bahn station instead of waiting for the number 21 bus. But soon Othmarschen, just like Klein Flottbek, is undergoing renovations.

A section of Othmarschen’s train platform is marked off with red and white tape. Nearby, a group of men, presumable construction workers, are standing around, a few of them smoking cigarettes. Occasionally, one of the men looks up to the station’s roof. Perhaps they are sizing up the job. A young woman walks by, her long leather boots hugging her long legs. The workmen size her up. The men smoke some more cigarettes. Perhaps realizing that people are watching, one of the workers moves a scaffolding frame. Another man puts more tape around a section of platform that was already been taped-off. Soon, they are all back to the serious business of doing nothing.

Whether or not I go to Klein Flottbek or Othmarschen, everything usually goes well after I get on the train. One exceptionally cold morning, however, the train came to an unscheduled stop in the middle of the tracks soon after leaving Bahrenfeld. Against the wet cold of Hamburg, I took the precaution of wearing fleece under my winter coat, but I am overdressed for the conditions on the S-Bahn. For some reason, the train is especially crowded. The seats are all taken, and I am standing pressed against an assortment of people with whom I would not voluntarily seek such close contact. It is no longer possible to see anything outside because the windows have fogged up. I am getting hotter as the wait drags on and on. Heat combined with an endless wait happens to be my concept of hell.

Still, the passengers on the train do not seem to get angry. They remain, true to the German stereotype, very orderly. A young woman jokes that we should get out and walk to the station at Altona, but no one attempts to do so. Several people phone their places of work on their ‘Handys,’ the German word (taken from English) for cellular phones, instruments that can indeed be handy at such times. And, as we continue to wait, rain mixed with snow forms rivulets that run down the outside of the windows.

After what feels like an eternity, the train seems to shudder. It is actually moving! The train starts on its way again. In unison, the passengers let out a sigh.

Later that day, on the way home, police wearing heavy protective padding and riot helmets patrol Othmarschen station. This means that there must be a soccer game tonight. Life in Germany is never boring.

Climbing the Ranks with Diplomacy