Articles
The Voice
Nature Notes – From the Backyard to the Biosphere. Make No Bones About It

Ah bones, we hear a lot about them. Drink milk for your bones, exercise for your bones, and take hormone therapy for your bones. They get a lot of press, these 206 pieces of rigid material hanging out inside the human body. Of course, they are pretty handy things. Linked together with admirable engineering skill, these units became so useful a commodity that a whole branch of the animal kingdom decided to accept the common idea of the endoskeleton. Fish, reptiles, amphibians, birds, and mammals (collectively known as subphylum Vertebrata) all share this internal structural feature.

All vertebrates have a similar basic body plan, with head, trunk and some sort of tail structure; a well-developed digestive system; and a similarly organized heart. But the endoskeleton, comprised in almost all cases of bone (the exception being, of course, sharks and rays, the cartilaginous fishes) is one of the most fascinating of our shared evolutionary characteristics. An internal collection of rigid units, the bones making up our skeletal systems serve essential roles — structural, protective, and chemical — in the vertebrate body.

Nearly as strong as steel, but a fraction of the weight, bones are highly functional from a utility perspective. However, they are much more than handy, lightweight supports for the vertebrate body. Bones also serve as anchorage points for muscles and other connective tissue, and play a vital role in some of our bodies’ key chemical processes.

Beginning as cartilage in developing vertebrates, bones start early in young animals’ lives to go through a process known as ossification. This process sees cartilaginous structures gradually transformed into bony material. Fascinatingly, in humans, youngsters’ skeletons are quite different than adults, as they are made up of not only cartilaginous units that will later ossify and become more rigid, but also comprised of a greater number of individual units (300 vs. 206 in adults). Some of these 300 will eventually fuse into the more familiar skeletal layout seen in adults.

But ossification isn’t the end of the story when it comes to bone development. In fact, bones are in a constant state of flux throughout a vertebrate’s lifetime. Hungry osteoclast cells continuously tunnel away and break down the structure, while handy osteoblast cells simultaneously build new bone. As anyone who has had a broken a bone knows, these bits of calcified cartilage holding us up do heal, and remarkably well. Thanks is entirely due to the work of these busy cells.

Of course, no productive work gets done in this world without a good base of communication. Such is certainly true for our osteoblast and osteoclast friends. With a complex (and still little understood) communication network, these cell types send messages to one another indicating whose turn it is to do what. Where this communication becomes especially important to us is at the exact point where calcium enters the picture.

The fact is, calcium is vital to all sorts of essential physiological processes in our bodies (e.g., muscle functioning and neural communication). Bones are at the root of how well (or indeed whether) these processes work. This is because bones, essentially a matrix of collagen (which is a protein) hardened by the laying down of calcium salts, can act as either a source or a sink for calcium in the body.

While the equation is not quite so simplistic, the story goes something like this. Where the diet is high in calcium, the constant osteoblast-osteoclast relationship results in a gross uptake of calcium. Thus, bones act as a sink for this mineral. Where the opposite is true (i.e., when the diet is low in calcium), the blood-bone communication network indicates that the equilibrium is off, and bones are broken down to release calcium until that all-important dynamic blood-bone balance is restored. Eeks! None of us likes the sound of bones being broken down.

Female humans are particularly troubled by the phenomenon of bone loss, often losing approximately 5 per cent of bone mass each year following menopause. Why? Well, like so many processes in the human body, both bone loss and bone development are controlled by hormones. With the hormonal changes following menopause (namely, the fall in oestrogen production), calcium is funnelled out of the skeleton, leading to a condition known as osteoporosis. Yep, empty pores where once there was solid, calcium-filled mass. Interestingly, no other female animals (and not all female humans) suffer from this condition, something scientists still have yet to figure out.

Rarely thought of unless we fall off the slide and hear a loud crack, or have to have therapy to ensure that they stick around for as long as the rest of our body plans to, bones do deserve a bit of appreciation now and again. So, let’s raise our glasses to the ever-useful bone… Crack (just kidding). 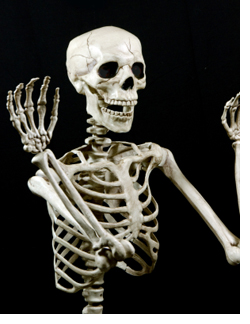 Lost and Found – The Web of Bones