Features
The Voice
A Moving Experience 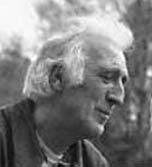 When I reached the top of the escalator, I was surprised to see the line up. The doors wouldn’t be open for another hour and I had thought I would be one of the first in line. I was looking forward to the speaker, although I must admit that I really didn’t know a lot about Jean Vanier. In fact, my first exposure to him was when I saw the brochure at work announcing that he was coming to London and the tickets were $16.00.

What initially caught my eye when I saw the brochure was his name. My grandchildren attend Jean Vanier Elementary School in London, Ontario. There had to be a connection. The brochure was titled Messengers of Hope, an Evening with Jean Vanier. I spoke with a co-worker, who had seen Jean Vanier a few years earlier when he visited London. We decided we would go. I spoke to my husband about it and he was interested. So I called to order tickets. It was general admission; therefore, we knew we would have to go early to get a good seat.

We walked into the Grand Ballroom at the London Convention Center and there were two big screens showing pictures of Jean Vanier in the company of disabled men and women of all ages. Each picture displayed happy, smiling faces. Jean was hugging, laughing, and obviously enjoying his time with these individuals. Then the music began. The singing was wonderful. It was upbeat, inspirational. I wanted to dance and clap my hands. My husband and our friends were also enjoying the music.

As the room started to fill, I noticed a significant number of seats in front of us that obviously were reserved. As the Master of Ceremonies began his opening statements, I learned about L’Arche London. It is an international community of over 120 group homes for developmentally disabled people that Jean Vanier had founded. One of these homes was located in London. I listened carefully. I knew I wanted to know more about this organization and this remarkable man. The speaker introduced a group of youths from King’s University with whom Jean had been in conference with for the last two days. These youths joined Jean and other community leaders in exploring ways that they could become so called messengers of hope. The lights were dimmed as rows of young people entered from the back of the room, all holding brightly lit lanterns. As they proudly entered, some were in wheelchairs, some challenged in other ways, and some not. I felt moved to the point of tears.

Next on stage, a group of developmentally handicapped dancers performed. The Spirit Movers, as they were called, were definitely living up to their name. I had never seen anything like this before. I had been to plays, musicals, concerts, but this was by far the most remarkable group I had ever witnessed. The dancers were obviously thrilled to be on stage, readily apparent by their waving arms and smiling faces.

Then Jean Vanier walked across the stage. A man I had only seen in pictures. He appeared much older than he was in the pictures. He wore jeans and a lightweight spring jacket over a shirt, even though it was February. His white hair was disheveled. Immediately I wondered why he had not combed his hair for this occasion. After everyone graciously gave him a standing ovation, Jean Vanier began to speak. His voice was calm, gentle, and sincere. His presence was bigger than life. As I listened, I learned what Jean Vanier was about, and his uncombed hair was obviously not even a consideration for him.

I listened to this great man’s every word. I knew in some way his words would touch each and every person in this great ballroom. He would change their view, maybe only for a short while, but hopefully for a lifetime. At the end of the ceremony, the Principal of Jean Vanier Elementary School, along with students from my grandchildren’s school presented their school’s namesake with a special plaque. Then the Spirit Movers performed another dance before the evening ended. Prior to leaving, a courteous Jean Vanier presented himself to each person. He spoke briefly with each individual before he left to catch a plane to Paris.

Thank you Jean Vanier for reminding us all of what it truly means to be a caring, loving human being.

The following excerpt is indicative of the deeply-caring, introspective man Jean Vanier is.

I discovered something which I had never confronted before, that there were immense forces of darkness and hatred within my own heart. At particular moments of fatigue or stress, I saw forces of hate rising up inside me, and the capacity to hurt someone who was weak and was provoking me! That, I think, was what caused me the most pain: to discover who I really am, and to realize that maybe I did not want to know who I really was! I did not want to admit all the garbage inside me. And then I had to decide whether I would just continue to pretend that I was okay and throw myself into hyperactivity, projects where I could forget all the garbage and prove to others how good I was. Elitism is the sickness of us all. We all want to be on the winning team. That is the heart of apartheid and every form of racism. The important thing is to become conscious of those forces in us and to work at being liberated from them and to discover that the worst enemy is inside our own hearts not outside!

All of Jean Vanier’s books are available through Daybreak Publications.

Further information on this selfless man and the L’Arche community is available at http://www.larche.ca/