Articles
The Voice
What’s in a Name?

“What’s in a name?
That which we call a rose
By any other word would smell as sweet.”
— from William Shakespeare’s Romeo and Juliet (II, ii, 1-2) 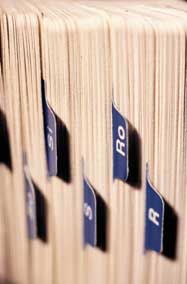 Juliet makes this observation in Romeo and Juliet, wondering aloud what intrinsic value a name truly holds. Shakespeare therefore, through Juliet, brings up an interesting point. Does a name truly mean anything? It is one of the first forms of identification we learn. It is one of the first questions we learn to answer. “Who are you?” “What’s your name?” Does the answer, “I’m Pam,” hold any fundamental information?

Interestingly, scores of individuals in our society are still preoccupied with the meaning of names. For example, “Paul” means “small.” “Mallory” means “bad omen.” “Olivier” (literally “olive tree”) means “peace.” While names like Paul might not be particularly representative (I’m talking about overall size here), naming a child Mallory suddenly seems cruel and Olivier, hopeful. While the Pauls I know are not small, the Mallory I know, sweet, and the Olivier, far from peaceful, traditional names may not have a direct link to their roots. Perhaps the traditional meaning of names is more a sign of hopefulness on the side of the parents that their children will be somehow blessed by their name.

This brings up the point of external influences. While parents consciously choose a name, with or without hope of the child growing into the name’s meaning, a parent does affect how a child will grow into their name. An immigrant parent who lives in Canada and gives a child a foreign name, such as, Ojibwa, may increase the child’s potential as a more cultural and on-the-fringe individual. Children are very much preoccupied with fitting in, and at ages in which children long to be accepted, a name like Ojibwa can easily set the child apart. For this reason, many children choose an alternate name. A friend of mine went by “Jason” for years, while his birth name is “Chi Shing.” Now, even his family calls him Jason, and appropriately, out of all the members of the family, he seems the most “Canadianized.” Such examples are pervasive in our society. In fact, Becoming Emma by Caterina Edwards (1992) is a novella centered on names and identity. A Latvian girl named Aida decides to change her identity to be more Americanized. Throughout the story, she strives to become “Emma.”

Parents who give their children non-traditional names (separate from cultural names), names such as Thorax, often set-up their children for being considered “different.” However, part of this choice of name is a reflection of the parents themselves, the ones who directly influence a maturing child. I have a friend named Athena who has a brother named Palladin. They certainly grew up to be a little different from the mainstream, although their parents were very non-traditional to begin with. Perhaps this is why parents who are partial to the name Patrick end-up raising children named Patrick in a similar way. The name itself is a reflection of the desired qualities cultivated by common characteristics in the parents, characteristics that are most influential to the child’s upbringing. This is likely also the reason that names have diminutives, especially for children (e.g., little Jennifers are often referred to as simply “Jen”).

To reiterate, talking to teachers, I’ve repeatedly heard the claim that Matthews, Kevins, Theresas, and so on tend to have similar characteristics. Being a parent, I remember how difficult it was to choose my daughter’s name; I ended up deciding on Elizabeth because I’ve adored all the Elizabeths in my life and admired their common characteristics. Perhaps because these are characteristics I value, I will attempt, consciously and subconsciously to cultivate them in my little girl. If this is the case, names truly are reflections of personalities, but perhaps for other reasons than would be expected.

Historically, and even presently, people change their names to be viewed in different lights. Throughout history, female authors chose male pen names (e.g., George Eliot is a pen name for Marian Evans) so that their writing would be accepted in a male-dominated society. Today, performers often have stage names, effectively establishing a dualism of character. A perfect example would be my friend “Pat Bastarde” who, on stage, is one of the hardest rockers you’ll ever see in every respect of hard rocker — crazy hair-do, head-banging, stage antics, etc. In person, Patrick is a shy, modest, sweet man, dedicated to his wife and his work in neuropharmocology. The one Patrick is totally unlike the Pat, and so the name change is highly suitable.

A final look at name change and significance are the people who change their names legally, establishing themselves socially and professionally as entirely different individuals. In many cultures, the woman taking on the man’s last name after marriage signifies a transfer of ownership from her father (or brothers) to her new husband. The name change occurs at a period of major change in the female’s life. Such a pattern is still present in those who choose to change their names legally for other reasons. The people I know who have legally changed their names did so upon major changes in their lives, often involving changes in outlook. The name change was literally the signature at the end of a document of changes in perspective, circumstance, and beliefs.

In short, our names are not necessarily the determinants of who we essentially are, but they are representative of who we are. Whether this correlation is due to cosmic predetermination or to parental influence, our names reflect our basic personalities and often even our social status. That is why I can say, today, I am Pam.