Articles
The Voice
Nature Notes – From the Backyard to the Biosphere. Seaweed Ethnobotany

While hiking the rocky shorelines of coastal British Columbia this February, I was struck with an acute sense of curiosity about a world of organisms about which I, and many inland dwellers, know so little. I am referring to the seaweeds. Rarely mentioned in general botanical literature, this group of marine algae is in fact of great historical, cultural and economic importance. Used as food and in medicine and technology for centuries, by peoples from Japan to Britain to North America’s Pacific Northwest coast, the little-discussed seaweed stands out as an under-appreciated member of the world’s flora.

Belonging to the Kingdom Protista (as opposed to Plantae), seaweeds are not actually plants per se. However, given that biological investigation has been roughly divided into the study of animals (zoology) and the study of non-animals, seaweed science, or phycology, fall to us the botanists.

Macroscopic seaweeds, those of greatest significance from an ethnobotanical perspective, fall into two main phylogenetic divisions, the red algae (Rhodophyta) and the brown algae (Phaeophyta). Both of these divisions are primarily marine in origin, and each is immensely diverse. There are approximately 4,000 species of red algae and 1,500 species of brown algae. The Rhodophyta predominate in warmer, tropical waters while the Phaeophyta comprise most of the algae found in cooler regions of the world.

A red algae familiar to many of us is that known to the Japanese as nori. A night out at a Japanese restaurant wouldn’t be complete without a serving of sushi (rice and miscellaneous other goodies surrounded by a delicate wrapping of this tasty seaweed). As for a representative of the brown algae, even the most casual of seaside visitors would be hard pressed to miss the conspicuous bull kelp, a ubiquitous seaweed found along both of our continent’s coasts. With its ball-like float and long hollow stipe, this unmistakeable algae provides a gratifying identification experience for the newly-emerging seaweed aficionado.

Seaweed ethnobotany is made particularly interesting by the fact that these organisms are as important to human cultures worldwide now as they ever have been. An important source of food historically, seaweeds remain particularly significant in Asian fare. In fact, even today, 10 per cent of the Japanese diet is comprised of seaweeds in one form or another. And technologically speaking, seaweeds remain invaluable. Used historically in a variety of applications, including fishing and food storage (e.g., the coastal First Nations of British Columbia used the long stipe of bull kelp in deep sea fishing, and they used the bulb as a water-tight storage container for important fats, such as seal oil). Seaweeds are used today for a multitude of purposes.

Seaweed derivatives are used in everything from cosmetics to paint to ice cream and as a substrate for biochemical experimentation (remember the high school Petri dish). The basis for a multi-billion dollar industry worldwide, seaweeds constitute an important part of the global economy. The jelly-like substance that can be extracted from a variety of these algae provides an excellent stabilizer and emulsifier for a variety of food and industrial purposes. Browse the ingredients in the dairy section of the grocery store and you’re likely to see the words carrageenan and agar. Both of these ingredients are seaweed derivatives that act to thicken and firm up our yogurts, ice creams and a diversity of other products.

Seaweed’s historical importance is evidenced by the fact that algae such as Porphyra (a red algae and of the genus to which nori belongs) have been cultivated in Asia for centuries. This specialized form of marine aquaculture was already a significant affair in Japan in the 1600s, when seaweed “?farmers’ would root bamboo stakes in the sea floor to act as a substrate for nori growth.

But seaweeds have been an important part of people’s diets far beyond Asia. Throughout the British Isles, Porphyra species (also known as laver) were an important food. Pounded, mixed with oats, and often fried as a cake, laver bread was, and still is in some cases, widely eaten. A good source of many nutrients, these cakes have been referred to as a complete survival food.

The annual harvest of Porphyra species by First Nations peoples of the Pacific Northwest was a significant cultural event. Along the British Columbia coast, early spring was considered prime harvest time. The algae, tender and sweet at this time of year, provided an important green vegetable at a point when terrestrial greens were not yet ready for consumption.

Due to the incredibly rapid growth of some edible seaweeds (certain species can grow an inch per day during the summer), multiple harvests were even possible. Interestingly, people would use cues from the terrestrial plant world to help determine the optimal time for harvest and re-harvest. The flowering or leaf expansion of trees, herbs and berry bushes acted as a sort of calendar, indicating when seaweed collection should take place.

Nutritionally speaking, seaweeds are a mixed bag. Many species are rich in protein and carbohydrates and are, almost universally, excellent sources of essential minerals such as calcium and potassium (a 100 gram portion of kelp provides over 1000 mg of calcium), as well as a variety of other trace elements. However, the protein and carbohydrates present in seaweeds are often nutritionally inaccessible because humans lack the enzymes required to break them down. Porphyra is the most notable exception. Humans are actually able to access 75 per cent of the algae’s protein content, an exceptionally high proportion of accessible protein for seaweed.

As is the case in the terrestrial environment, concerns exist about the future health of the ecological systems of which these organisms are a part. In both Britain and North America, concerns have been raised about contamination of marine algae. Consumption of seaweed by people in the British Isles, for example, has begun to decline as fears about nuclear contamination of this resource become more serious. And on the Pacific coast of North America, contamination of seaweeds by effluent from pulp and paper mills worries traditional harvesters. Add to this industrial-style resource over-extraction, and those who have relied on these marine algae for centuries have real cause for concern.

However, the humble seaweed has managed to pull off remarkable feats in the past. It is hoped that, with such a rich history, such a significant part in the global economy, and playing such a vital role in cultures worldwide, the unassuming seaweed may be just the ticket the oceans need to bring their ecological plight into the public eye. 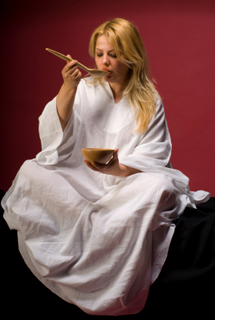