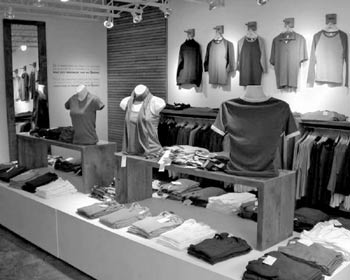 MONTREAL (CUP) — It’s probably fair to say that most of us haven’t travelled around the world, but your closet has. While you’ll surely find blouses from China, shoes from Brazil, coats from the Philippines, scarves from India and t-shirts from El Salvador, you’ll be hard-pressed to find something made here. In an era filled with cheap labour and high production costs, clothing made in Canada has practically become obsolete.

In response to this, Blank, a store dedicated to selling clothes manufactured in Quebec, opened in November 2005 in the heart of the Plateau. According to Martin Delisle, Quebec has suffered from about 30,000 job losses in the textile industry in the past three years. Coming from a family that’s been in the industry for forty years, this hit a sensitive chord in him and he decided to do something about it. While his trade is graphic design, Delisle’s foray into the clothing industry began about a year and a half ago. He started Trailer Park Trash with his friends, Michel Mayer and Benoit Gariepy. They wanted to print designs on shirts that were made in Quebec. Since they couldn’t find any, they decided to produce their own shirts for their printed designs.

With the support of clients, they managed to turn Trailer Park Trash into a wholesale shirt-making company, developing the conception by opening Blank as a boutique selling these goods to help restore Quebec’s textile industry. They created all the patterns themselves. “We created models that we then modified to satisfy our [wholesale] customer,” he says.

Mindful of its beginnings, the clothing lends itself well to print design. All of the clothes are made from a blend of 50 per cent cotton and 50 per cent polyester. “We don’t want our clothes to shrink or lose their colour,” says Delisle. He says this is also the best surface for silk-screening, as the stretch of the fabric preserves the imprint of the design.

Delisle and his associates want to make local designers realize that if they don’t stop buying material and labour service from China, they help contribute to increase in massive job losses in Quebec. “If you think you’re going to save a dollar or two by buying something in China, it’s going to cost you hundreds of dollars in unemployment insurance at the end of the year,” he says. As such, one of the company’s main priorities is to create jobs as well as to preserve the ones that are here. “It’s simple,” he says “we wanted to prove to people that we’re still able to make affordable [clothing] in Quebec.”

“When we started making our prototypes and evaluating their costs, we realized that we could deliver a product at reasonable price,” he says. As well, local production gives Delisle the benefit of efficiency. According to him, the delivery and production time gets cut down to about two weeks compared to the five to six months one has to wait for a shipment coming from China.

The company employs about 25 people in total. According to Delisle, the company’s dedication to preserving what they can of the Quebec labour has appealed to the current boutique employees. Part of Blank’s dedication is to make sure that employees are compensated fairly for their labour. With employees working in production who have over 20 years experience in sewing, cutting and weaving fabric, Delisle is mindful of the kind of value that comes with the labour of shirt making. “We went to see the working conditions to make sure they were all acceptable,” he says. Apart from ensuring that his employees receive very good wages, he mentions that all the employees are declared to the government.

Blank specializes in t-shirts, hoodies, camisoles, tank tops, scarves and bags. Riding on supporting the local industry, the boutique also carry jewellery that is made by two local designers. “The retail side [of the company] is exploding at the moment,” he says. Apart from already including taxes in the products’ pricetags, he also mentions that their products cost about 25 per cent less than American Apparel.

In a time when jobs within a local industry are lost in favour of getting cheaper labour in other parts of the world, Delisle gives good reason to open up as store like Blank. “I think it’s about reinvesting in our industry, in our local economy, instead of giving money to someone else. It creates jobs directly in Montreal,” he says.

Blank is located at 4276 Saint-Laurent. For more information check out their website at http://www.wearblank.com

The Travelling Student – On The Way Out