What makes us human? It’s a pretty rich question, and as a student of anthropology, it is one that I am deeply interested in. Is it our strong technical abilities to manipulate the physical world? Our capacity for an ordered language based on arbitrary symbols and sounds? Simply our brain size? Or is it the mere ability to ask the question? There are infinite answers to the question posed by Channel 4 in the mini-series, “What Makes Us Human?” At the end of an exhaustive list, it looks like the majority of us think that nearly everything we do makes us human, from our penchant for cooked food to our mass addiction to video games. And really, aren’t all these things purely human simply because we do them?

There have been a multitude of scientific experiments to determine what it is that makes us different from other mammals, specifically our closest DNA relative, the chimpanzee, whom our human line separated from six million years ago. A major clue in this ancient puzzle has come from close study of a rare and current mutation in humans. Existing largely in Pakistan, these people suffer from a severely under-developed brain and skull. They can be easily identified by their small heads and childish behaviour. Since their mental capacity doesn’t develop past that of a normal one or two year-old child, the sufferers display erratic, often ape-like behaviour. They will screech and clap their hands, performing on cue in the street. Thanks to the participation of a few families affected with the disease in genetic studies, three separate genes have been identified as the main causes.

One of these is of particular interest to scientists. Scientists at the University of Chicago have pinpointed a specific gene as the component in all humans that accounts for their large brains, three times the size of chimpanzees. They explained that six million years ago when the evolutionary lines of humans and chimpanzees split, this particular gene must have been responsible for the rapid cranial enlargement of anthropoids (direct human ancestors). Thus our species got the bigger brain, while apes followed a different genetic path.

Interestingly, with our ever-enlarging brains came a parallel effect of larger social groups. And this may be the answer to our initial and maddening question, “What makes us human?” The major difference between ours and other species is our brain size. So in discovering just what these massive brains were developed for in the process of natural selection, could we be closer to understanding what makes us special?

Researchers think that communication is the key. Not merely language, but the ability to comprehend first-hand, second-hand and fourth-hand information. The fact that we can understand the complex relationships of a large group of people and still know how to react in response is amazingly unique to humans, researchers say, and is probably directly related to brain size and community size. As our species evolved into what we now call human, we were adapting ourselves to live in larger social groups, so our brains expanded and gave us the ability to interpret the meaning and thought behind the faces of all our counterparts.

Thanks to this one gene, which is notably still mutating and spreading through the human population, we learned to live with each other, tell stories, be compassionate, and ultimately to share. Remember that all-important lesson when you we six years old about sharing? Maybe we really did learn everything we needed to know in kindergarten, that being what it means to be human.

Fly on the Wall—Just Because 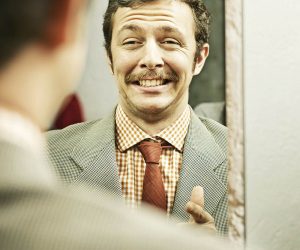 Fly on the Wall—Humility and Vanity