Articles
The Voice
The Cowboy and the Fisherman 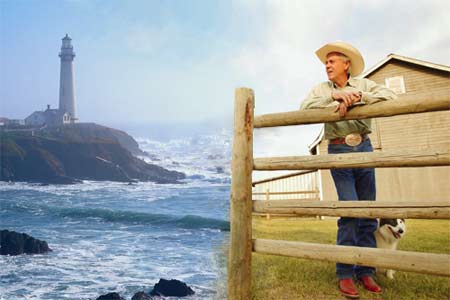 I first met a Newfoundlander in Calgary, Alberta. He was a new employee at my company. He was easily recognizable because of his Stephenville accent.

I am an Albertan and so we had a different perspective on life in Canada. Our conversations are worth repeating here.

I have never seen the ocean or been further east than the centre of the world, Toronto – at least that is what Torontonians think. Once exposed to this Newfoundlander I would never be the same.

There was a sadness in his voice when he spoke of his home province. Times are tough there, prospects few. Fresh out of university he wanted work so he headed to the other Atlantic provinces only to learn the economies there were no better. Being young, with no attachments, he headed west in hopes of a brighter future.

He recalls his last ferry ride. The graffiti on the wall read, “Last one to leave, turn out the lights.”

He sold his belongings, his furniture and his car to finance a trip west. At first, I was amazed at the courage it must have taken. On the rumour there may be work in Alberta he sold everything to go west.

“That takes nerve,” I said.

“B’ys,” he said “if me brother hadn’t put me up for awhile, it would’ve been rough.”

“Your brother lives in Calgary?” I asked.

“Yeah,” my friend replied. I was less impressed with his courageous trip into the unknown.

Working long hours together, we became friends. I learned of the unique habits and qualities of people from the east.

He likes his beer warm and thick. That’s how I enjoy my morning oatmeal, but not my lager. He drinks stout. We differ in our cocktail preferences. Beer should be ice cold, amber in hue and when you hold it up to a light you can see through the glass. I drink Budweiser, but I am Canadian.

He has nine brothers and sisters. I was astonished by the size of his family. “We’re Catholic,” was his only explanation. Unless you’re Mormon, that size of family is uncommon in Alberta. Someone asked if he could remember all their names. He laughed and said his parents started to run out of names, so his youngest siblings were Jesus, Mary and Joseph.

When I learned that he was the first boy with four older sisters I noted that hand-me-downs must have been tough on him.

One summer, his family came to Alberta for a visit. I was invited out to enjoy fresh lobster. Up to then my experience with seafood cuisine included canned tuna and canned salmon.

A hamburger on a plate no longer resembles a cow. A lobster on a plate looks like a lobster on a plate. There is a certain amount of violence needed to eat a lobster. In the end, I couldn’t stomach it. I enjoyed a hotdog that supper, but then, I have a bland palate. I don’t eat prairie oysters, an Alberta delicacy, either.

Before he left, I learned many things from my Newfoundland friend. My wife is “the missus.” Last call is just a warning. They will escort us out when it’s time. Laugh loud at every joke.

Unfortunately, I couldn’t enlighten him about Canadian politics. Last I heard he was still a Liberal.

A sincere and hard-working employee, he was always on the lookout for something better. He found a good job with our southern neighbours.

I think that after you first leave home, you never really put down roots again. That is a severe Canadian problem. Lack of governmental support and organization creates unequal economic prosperity within the country.

When I spoke to him last he owned two revolvers, but was looking to purchase a semi-automatic. I think we’ve lost him for good.

When I hear a politician speak about Canada’s diversity, I wonder if they truly understand or appreciate the value of our diversity. Our resources are the people. Diversity is our strength.

It was with homesickness and fond memories that he described Newfoundland.

Through him I developed a love of Newfoundland and its culture.

Through his eyes I saw another side of Canada. I felt the pain of hard times and the pride of a hardy people. My people. My fellow Canadians.

Someday I will see the beautiful province of Newfoundland through my own eyes and I will stand barefoot in the ocean, though I will drive there in my car rather than sell it to finance the trip. And I will bring my own beer.

From Where I Sit – Before it’s Too Late