When our daughter was in her sixth month of life, my husband and I decided to do something that four out of five accountants and retirement consultants would not recommend. We found ourselves between jobs and with just a little bit of money in our bank account. We decided to take three months off work over the Christmas season.

Most of that time, we spent on one of the local Gulf islands, living in a one-room cabin that a friend graciously let us borrow. It seems to me that it rained most of the time. We spent good chunks of our days eating, sleeping and playing card games. At times, we would listen to the wind hurling itself at the roof and walls, as though possessed by a fierce determination to bring us together with the sea. Draped in Gore-Tex, we would wander along the treacherously slippery shoreline, with baby pressed tight to the chest, lifting stones in search of crabs, and staring in awe at the magnificent breakers crashing and foaming around jagged black rocks. We watched ferryboats passing by at night, lit-up like magnificent palaces. On our last night there, we built a bonfire on the rocks overlooking the ocean. We cooked oysters and mussels on the hot coals.

During that entire period, the only thing either of us did that could be termed “productive” was cooking meals, washing dishes, changing and laundering diapers, and taking loads of laundry to the laundromat in town, where we would drink espressos and read week-old newspapers.

That brief interlude from reality was a pivotal time in my life. It was the point at which I realized something very significant — work is just a way to make a living. It may be (hopefully is) both challenging and rewarding. But it is not the be-all and end-all of existence. It is not my identity or my raison d’etre. Every now and again, it is important to find a way to re-emphasize this for myself. Perhaps this means doing without some of the things that other double-income families tend to take for granted, in order to afford the occasional break from routine. We don’t have cable television, for instance. We don’t take holidays overseas anymore. I don’t wear make-up, and we don’t go to see many first-run films. Almost certainly it means that Bill and I will be working, in some capacity, until we drop.

Nevertheless, we enjoy a quality of life that seems very rich. We eat good food and enjoy good books. We go to the occasional play. We are continuing our lifelong process of learning. We listen to great music and spend as much time as we can with family and friends.

Overall, I would have to say the trade off is well worth it. 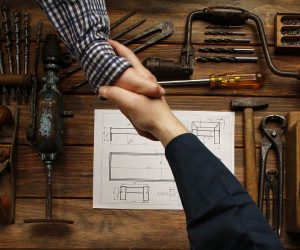