Columns
The Voice
Music To Eat Lunch To – …And you will know us by the trail of dead: So Divided 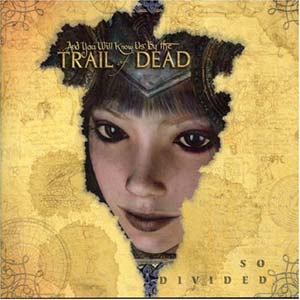 Otherwise known as Trail of Dead, this five piece band from Hawaii, Washington and now Texas is delivering music that is somewhat hard to define. Specifically, it sounds a lot like the stuff I would expect to hear pumped out of the speakers at cosy smoked-filled little coffee shops in Amsterdam. It’s like the Doors, the Beatles, Third Eye Blind and all sorts of alternative bands rolled up into one almost spooky result. The music is melodic and frequently studded with electronic interludes and general background noise that adds to the strange atmosphere.

So Divided is an album with an easy flow, enjoyable melody and surprisingly upbeat tracks despite fearsome and depressive sounding titles (“Witch’s Web”, “Eight Days of Hell”). Although it’s not something I would generally listen to, I’m glad for hearing it because I can tell the musicians really are enjoying themselves. There’s an energy that comes out of the songs that lasts until the very end, and I dare say that even a die-hard heavy metal fan would think twice before changing the CD.

The use of all kinds of different instruments in this album helps to give it a very unique and unforgettable sound; mixing styles used by psychedelic sixties bands with the odd Japanese twang makes for compelling music no matter what the outcome. Trail of Dead has pulled it off flawlessly, however, and the entire track list is nothing short of impressive. No particular song jumps off the album, but what you’re left with is more an impression and an overall appreciation for what you’ve just witnessed.

The only real issue with this album is context. Like I’ve said, this could easily be the soundtrack to a drug-induced stupor, but where else would I be able to enjoy it to the full? Maybe this goes to show the general mental state of their fans ? not that that’s a bad thing. Unfortunately, I’ve got other things to do with my time, and I need something with some pep in it to get me going. That said, this will be shelved and remembered for an appropriate time.

So Divided is really an album that needs to be heard to be believed, and regardless of what genre you’re usually attracted to, as a music lover you can’t help but appreciate these quick 11 tracks.