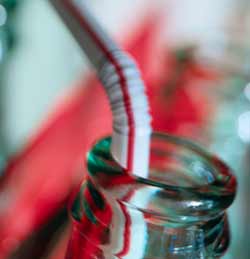 Want to lose weight, quickly, effortlessly, and deliciously? It’s as simple as buying boatloads of an exciting-looking new drink produced and marketed by the newly minted health experts at Coca-Cola and Nestle. You merely need to consume three pricey cans of the drink each day. That’s not exactly how Coca Cola and Nestle put it specifically, but their indirect marketing intent for the new product Enviga couldn’t be clearer.

Apparently, three 355 ml cans of the product will burn 60 to 100 calories. The marketers have taken a cautious effort to ensure that Enviga’s marketing materials and health claims refrain from mentioning any weight loss benefits of the product. They only reference the drink’s alleged calorie-burning potential. It leaves a person wondering why someone would be concerned about burning calories if weight-loss wasn’t the primary goal? The company’s effort to draw a fine line between weight loss and calorie burning (the latter apparently proven in a questionably-valid company-financed study) appears sneaky at best. As ABC reports, “though Enviga is not marketed specifically as a weight loss product, some doctors and consumer advocates say that looking at the ads, it’s hard to think of anything else” (Marikar, January 3, 2007).

According to CBC, “the claim depends partly on research that hasn’t been publicly released or formally reviewed by other scientists, and skeptics aren’t convinced of the health benefits” (CBC, October 14, 2006). In fact, the short-term three-day tests were conducted on healthy, normal-weight individuals on a controlled diet (Tappy, February 2007). Coincidentally, fitter people with more muscle burn calories more easily than the rest of us. It is interesting that the researchers chose to use healthy, normal-weight individuals to provide their calorie-burning numbers, while ignoring those who would be most enthused by such claims. Importantly, metabolism boosts tend to be neutralized by increased eating, in order to make up for it as our bodies strive toward homeostasis. The calorie-burning effects of Enviga over the long-term will tend to be about as static and solidified as the results of a weight-loss diet (i.e., not exactly known for lasting long or producing the same benefit long-term).

Each can has 60 to 100 calories and costs approximately US $1.29 to $1.49. That’s about four dollars a day (or more) for three cans. One month for Enviga’s recommended daily dose will cost at least US $115. The company recommended this daily dose, even though “people would have to drink more than five cans of Enviga to burn the number of calories in two Oreo cookies” (CBC, October 14, 2006). That is if we assume that the number of calories burned are scientifically accurate.

In fact, the Center for Science in the Public Interest (CSPI), which has launched a lawsuit against Enviga, argues that “Enviga burns money, and over the long-term is more likely to result in a negative bank balance than negative calories” (CSPI, December 4, 2006). Further, CSPI states that “the evidence that Enviga has even a minor effect is weak and inconsistent at best, and that the claims violate federal food law and state consumer protection laws” (Ibid.).

The drink was launched in the U.S. in January, and there are no public plans to bring it into Canada as of yet (CBC news, October 14, 2006). The main question arises, why would someone spend countless dollars when you can simply brew your own green tea, and perhaps (like Enviga) add some artificial sweetener to improve the taste? One of the ironies of this health product is that the relative lack of calories (only five per serving) is enabled through the use of artificial sweetener, which dilutes the meaning of the phrase “natural health product.” To really see this beverage as being health-conscious, you’d have to ignore the use of artificial sweetener, and neglect the assumption that they tend to increase hunger, rather than actually help dieters keep the pounds off. Aspartame-laced green tea may turn out to be the next best green-coloured hunger-inducer -? right behind marijuana!

Making this particular green tea-based product even less healthy is its caffeine content. Marketed as an energy drink (Marikar, January 3, 2007) as well as a health promoter (kind of like Red Bull, but with the addition of shedding calories), the suggested dosage of three cans per day contain a total of 300 milligrams of caffeine. This is the amount found in nine cans of Coke (CSPI, December 4, 2006). This in itself is not healthy, of course. The company’s tests (Tappy et al, February 2007) show that there were “no adverse effects on heart rate or blood pressure” to the subjects after drinking these nine Cokes worth of caffeine, which suggests that the carefully-selected test subjects were either spectacularly healthy or Coke-Nestle has a different definition of the term “adverse effects” or the tests weren’t conducted in as scientific a manner as they could’ve been.

The following are Enviga’s ingredients: carbonated water, calcium lactate, concentrated green tea from tea leaves, citric acid, phosphoric acid, potassium sorbate and potassium benzoate, natural flavors, aspartame, caffeine, and Acesulfame potassium (BevNet). Does that seem healthy, especially compared to regular green tea, at a fraction of the cost? The cost is a fraction of even more expensive designer brands of tea. By the ingredients alone, Enviga seems like just another carbonated soda, just with a marketing twist.

So how does one fight against the marketing magic of a scientifically questionable product that takes the benefits of green tea and dilutes it while sucking the money out of consumers? First, we must consider that in a free market system, Coca-Cola and Nestea are doing the right thing for their bottom line. They are increasing shareholder value, while introducing a potentially-blockbuster product that’ll keep the market of health nuts coming back for more. Perhaps there’s nothing wrong that is being done here. Consumers are free to ignore the product. But the issue comes down to scientific claims being made that are based on very short-term, company-financed tests. You don’t see many products on the market where non-profit organizations file lawsuits and Connecticut Attorney General Richard Blumenthal steps in to ask for scientific data proving calorie-burning claims (Associated Press, February 6, 2007). Americans should feel free to buy the product knowing its claims are largely based on marketing magic. Canadians should continue to drink their green tea, along with all the health advantages it offers, while hoping Enviga dies on the vine before making it into our country, or doesn’t make it past Health Canada’s licensing requirements necessary for marketing natural health products. Perhaps such intense evaluation is why there are no plans to bring the product to Canada.

Expensive mass-market items capitalizing on health benefits of cheaper natural foods are a dime a dozen, but we might all be better off with the natural, unadulterated source of benefits. Skip the Enviga. Stick to natural green tea, Canadians, before this product comes here to suck in our weary weight-loss warriors (and isn’t that pretty much everyone?). Do you want to shed calories? Exercise and eat less. As CSPI’s Executive Director says, “If you want to lose weight, drink less Coke, not more Enviga” (CSPI, December 4, 2006).

Counteracting The Slow Metabolism That Results From Fad Dieting