Articles
The Voice
Hundreds demonstrate against police brutality in Montreal

MONTREAL (CUP) — About 500 people gathered in Montreal on March 15 as part of the International Day Against Police Brutality.

According to police, 15 people were arrested: four will face arson charges, one will be charged with assaulting a police officer, one with mischief and nine with illegal assembly.

The march wound through the predominantly working-class immigrant neighbourhood of Cote-des-Neiges, stopping to mark where Mohamed-Anas Bennis was killed by two Montreal police officers in December 2005.
Police have said the shooting was in self-defence after an officer was stabbed in the leg and the neck, but they have not made any evidence of the wound or the knife public. The have also released little of the autopsy findings. The Coalition Opposed to Police Brutality has demanded a full public inquiry and the disclosure of police evidence.

“There have been 37 people killed [by police] in the past 20 years in Montreal, that’s way too many,” Kerre King from the COPB told the crowd. “They’re doing this with complete impunity and they’re getting away with it and we can’t let them do this.”

The coalition also demanded an end to police crackdowns at political protests, an end to police harassment of homeless people and squeegee kids, and an end to racial profiling. Montreal police were condemned in a 2006 United Nations report for the use of mass arrests during demonstrations.

Women’s organizations in Montreal also called for people to attend the protest in response to a violent police crackdown at the March 8 International Women’s Day demonstration. Three women were injured by police as they tried to capture Montreal activist Jaggi Singh. Singh was eventually arrested [for] allegedly breaching his bail conditions; the charges have since been thrown out of court.

“We were directly the victims of police brutality and the police acted with impunity. We have asked there to be an investigation and action from Mayor [Gerald] Tremblay and Premier [Jean] Charest,” said Dolores Chew from Women of Diverse Origins in an interview. “One of our slogans is going to be ‘Who do you call when the police assault you.'”

Participants in the demonstration also brought their personal stories of encountering police brutality, tying them to the greater problem of what they said was police acting with impunity.

“I am [at] today’s demonstration today because in 2003 I was in Quebec [City] for a demonstration against the Charest government. It was my first political demonstration and I got shot in the face with a tear-gas bomb from three metres away,” said Sherbrooke CEGEP student Rene Ouelette. “I spent two weeks in the hospital [as a result].”

The demonstration was followed by numerous vans filled with riot police and police helicopters. A few of the marchers destroyed a McDonald’s sign, and broke the windows of several telephone booths and a bus shelter.

After the demonstration officially ended, about 70 participants blocked the intersection at St Denis and Maisonneuve for 20 minutes and went down a side street. Several participants spray-painted another McDonald’s and broke the windows of some local businesses.

The march has been held in Montreal for several years, and has ended in arrests each time. Last year, 33 people were arrested. 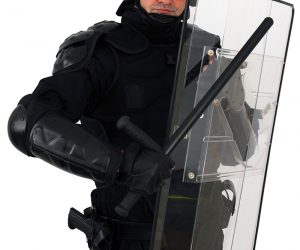