When the year starts coming to its end, people start partying. Or at least that happens in Slovenia, where I come from. The shop windows change their outfits beginning in November and everything sparkles in that Christmas-y red and green, so the whole capital, Ljubljana, reminds me of a field of poppies. And then Merry December suddenly strikes. There are concerts, parties, and business dinners everywhere you look. By the Ljubljanica River, winding right through the city’s centre, small wooden stalls with all kinds of gifts spring, and at some of them you can treat yourself to a cup of hot wine. So after dinner with your family, you hurry there and you can be sure to meet someone you know, even if you haven’t arranged any rendez-vous in advance, or meet some new people. In this kind of atmosphere you really get the feeling that New Year’s holidays are not just about boosting the national economy, but about relationships, about family and friends, and about having a good time. 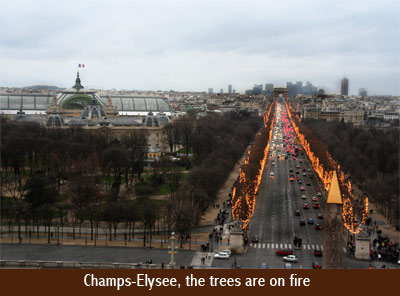 So you can imagine I looked forward to spending my New Year’s holidays in Paris, a much larger capital with so many more possibilities to enjoy yourself and the people you might meet. It all started quite typically: in late November, marchés de Noël (or Christmas fairs) flourished, at least one in every town. There were a couple of them in Dijon, where my boyfriend and I went to pay a visit to a friend who was also spending her semester as an exchange student. On our weekend journey to Dieppe in Normandy the lifeless landscape of empty fields was enlivened by a sign for a fair every couple of miles. Along with the fair always came a carousel and sometimes even a small skating rink. One of these appeared right in front of the Hôtel de Ville, the town hall in the middle of Paris. It was not only fun, but also very convenient, because all the big shopping centres are right around the corner. Plus, you could guess what the most popular gifts would be this year according to the logotypes on the shopping bags people were carrying.

Maybe I had bad luck, since the Samaritane centre was (and still is) closed for renovation and so I was deprived of the most famous shop-window glitter. But hey, I thought, if there is a lot of anything in Paris it is shops, and I was convinced I would find them dazzling. That, however, did not happen: their windows remained dark and gloomy just like the sky above the city. To make things even worse, all the fairs mysteriously disappeared right after December 25. How could that be? And even though there were thousands of posters all around the city which invited people to discover Paris Illuminé Paris, the only street I could see bright at night was the avenue Champs-Elysées. A continuous river of people paraded by the closed, dull shops only to see that the lights on the box-shaped trees were lit and all was in order. No food-and-drink stalls to warm yourself, no gifts to buy, no friends to meet. Poor Parisians, I thought, they get to go down this road every year. 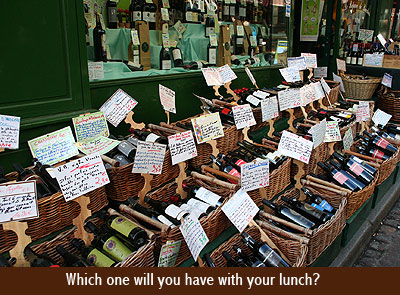 The atmosphere was therefore virtually forcing you to resort to food–and we did. There was a lot of it, all kinds, too, but not everywhere or at every hour. There is a boulanger (a baker’s shop) on every corner and, accordingly, there is one on the corner of my street. It takes about three minutes to get out of bed and fetch a warm baguette and pain au chocolat for breakfast. They usually sell pastries as well. My boyfriend is crazy about the soft, chocolate- or caramel-filled stick-like éclair, but I fell for the raspberry tartelette, a pie which reminds me of a ruby and is exactly as good as it looks. Especially for Christmas, the French prepare bûche de Noël, which literally means “Christmas log.” This chocolate or fruit or chestnut cake indeed reminds one of a log, but you would not want to throw it into the fireplace. Not to mention galette du rois, a special pie the French eat on the second Sunday after Christmas. It is made of flaky pastry and fruits and each of them contains a small, usually plastic, figurine. The one who gets it in his or her piece becomes a king or a queen for the day. This tradition is in fact the origin of the king cake in the United States during the Carnival season. 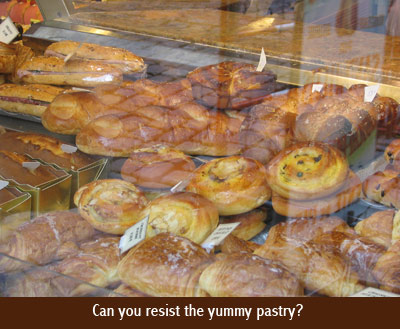 Since my mother was paying a visit, we longed for something famously French. So we decided on a special late lunch. But in France you can eat what you want only when the time is right. From 3 p.m. to 6 p.m., every decent restaurant in Paris is closed. Still, although we grumbled about it, our swapping late lunch for dinner paid off. We found a true fondue restaurant in the popular rue Moufftard in the Latin Quarter. There I discovered not only the charm of the melting cheese in a pot above fire, but also the tasty meat fondue. In this case you fork pieces of beef or duck and let them roast in a sprinkling of oil. Best of all, however, I loved the fresh fruit in hot dark chocolate.

Paris, in the end, turned out to have quite a different New Year’s atmosphere from what I expected. We haven’t been to any nightclubs, so I couldn’t really say this is not a city in which to have fun in that way. But we did try to find a place to listen to the French chansons. Unfortunately, our quest turned out to be unsuccessful. It seems the smoke-filled bars where you could have a drink by the sound of an accordion and songs of amour in the fashion of Edith Piaf have gone with the winds of change.

The French capital is, however, definitely the best place to party on some other occasions. At the end of January, CGT (Confédération Générale du Travail, the major French workers trade union) organized a protest in the name of who-knows-what (indeed, some people I talked with went demonstrating without having any idea what it was really about) at Place d?Italy which is close to where I live. I know that protests are a uniquely French phenomenon and I have already felt its effects every couple of weeks when the metro did not show up when it was supposed to. But what struck me this time was the theme from Batman spreading down the avenues along with the smell of hot dogs and the colourful balloons floating in the clear blue sky. On the wide roundabout, which the demonstrators seized for their purposes, there were all the ingredients of a perfect party: booze, barbecues, party flags, crackers, and even a live concert performed by a Mexican group. Who said the French don’t know how to swing and swirl? If you mixed up the dates and occasions, the shame is on you. 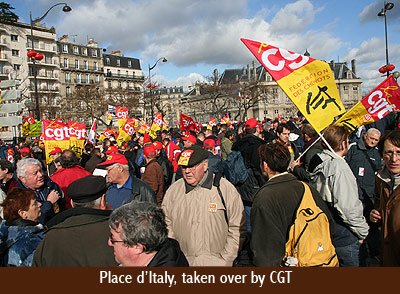 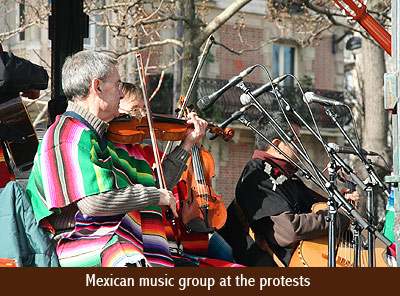