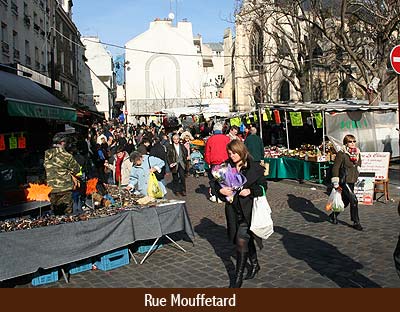 Although the weekdays I spend in Paris as an exchange student are not as full as those of my fellow (but regular) students, I have a special affinity for Sundays, and for a number of good reasons. Lucky as I am, I live close to the little square at the foot of rue Mouffetard, which leads slightly uphill to the Panthéon. On this narrow, lively street there is a market almost every day, but Sundays are my favourite. I have my breakfast in a café with the most magnificent view over a square with a fountain, a small park by the church Saint Medrad, and the first fruit stalls. Farther up the street you can buy a still-warm baguette, choose between an infinite number of cheeses (do you prefer the ones with mould or those with nuts?), select an appropriate wine to go with it, and even opt between fresh clams or an octopus. On Sundays, the market is especially crowded since the famille nombreuses, including at least three children, come to shop for their lunch. As I read in an influential newspaper, in about twenty years France is expected to become the most powerful country in Europe in terms of economy because of the rising number of people. Indeed, I have never seen so many little children as there are on Sundays in the streets and parks of Paris. Observing them, neatly dressed and combed but not yet aware of time as they will be some years later, is, I believe, one of the most inspiring ways to start your morning. 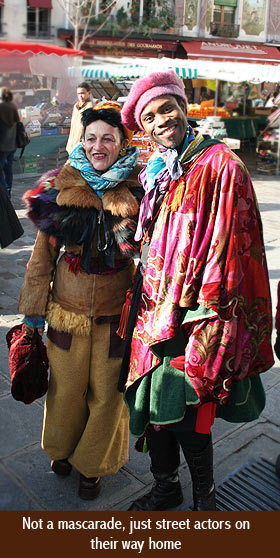 I leave the café just before noon, as another spectacle is about to begin on an empty spot between the fruit stalls and the park of the church. There are, in fact, many Sunday performances along rue Moufftard by musicians and street-theatre actors, but I prefer this one to all the others. A group of accordion players and singers prepare a provisional stage, the most important element being a microphone. They are dressed as typically French as they could be. Men wear black-and-white striped shirts, berets, and kerchiefs around their necks, while women wear long colourful skirts and wavy neckerchief of strong colors, pinned with brooches. Next to the musicians stand boxes of folders that contain texts of songs. As the crowd grows larger, the texts are distributed among the passersby, who stop to sing along. They stand in a half-circle and respectfully make space for those who feel like dancing. You are free to ask for a certain song to be played, but you are also free to take the microphone and sing it yourself. I will never forget that chilly yet sunny Sunday in February, when a tiny, white-haired lady sang a famous part of the opera Carmen with the voice of a prima donna while one of the couples danced something like flamenco, the man clicking with castanets. And all of a sudden you feel as if a light breeze had taken you out of the city, in some village two centuries ago. 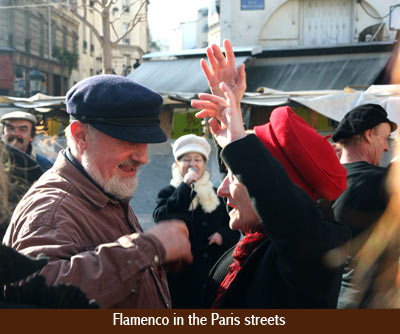 Leaving the lively square behind, I walk toward the Seine. All the shops are normally closed on Sundays, but bookworms nevertheless get their satisfaction. Of course you can find some enormous, several-storeyed bookshops in Paris, but unlike elsewhere around the Western world, these have not pushed smaller, friendlier bookshops over the edge. As I am a frequent book buyer (not always such a reader, though), Paris perfectly reflects my idea of heaven. On a Sunday walk you can turn around some corner and you might just discover a book market where you can buy books by pounds! And not only that?new and used, novels and art books, all of them are amazingly cheap, at least compared to my Slovenian homeland. By the Seine, opposite the Notre Dame cathedral, there is the most famous bookshop in France, Shakespeare and Company Books. This shop contains not only new and used English and French books on all subjects one can come up with, but also several beds, a small kitchen, and a table with a real (!) typewriter, all tucked somewhere between the shelves that are filled with dusty books. Apparently, aspiring writers from all around the world can come to live there for several months in return for some help around the shop and a pledge to write their own book someday. And on a Sunday, you are even served a hot cup of tea while leafing through the word treasury. 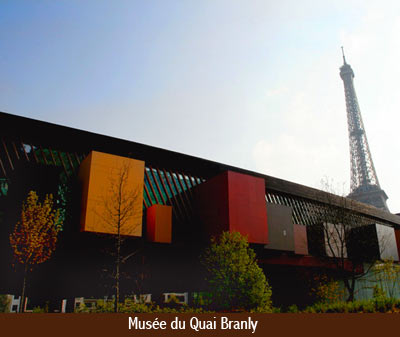 If I do not get completely caught up in one of many such magic places until the end of the day, I sometimes pretend to be a real tourist and visit a museum. A good reason why you may want to do that on the first Sunday of the month (even though you risk being trod on by a constant flow of people if you admire a certain object a bit too long), is that every museum in Paris is free of charge. Just before my arrival here, a new museum was opened and I quickly fell in love with it. Musée du quai Branly is interesting enough for its architecture, but as a future anthropologist I am attracted to everything that is happening there. That includes not only anthropological exhibitions on virtually every corner of the world, but also conferences, films, lectures, and concerts. Where else could you observe the masks of New Ireland in the Pacific Ocean, follow a lecture on the Swiss linguist Ferdinand de Saussure, and round out the day with a concert given by Cuban improvisational poets? 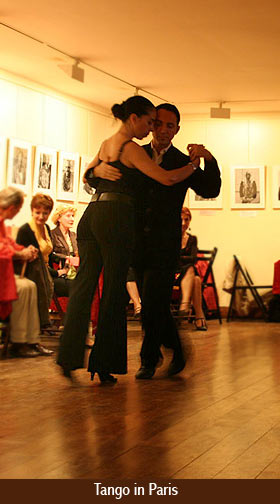 On other Sunday evenings, though, there is El Patio. You are right, this is not a French word. It is the Spanish name of a dancing room on the second floor of a narrow house in the heart of Paris. It is a place my boyfriend and I go to enjoy the company and dance of Carmen, a Uruguayan dancer of the Argentine tango, and her students, whom we joined a couple of months ago.

We soon came to adore this lean sixty-something lady who is bursting with energy and a love of tango. I once complained to one of our friends from the group that it is a shame the dances in El Patio are on Sundays since it is the end of the week and we often feel too tired to come. He answered that for him a new week simply begins on the Sunday evening when he spins around with one of the other amazing dancers to the rhythm of a tango, milonga, or waltz.

Can you imagine any better way to start your week?

This World – Indian Winter, Part I