This is the first of a special three-part Voice report on Athabasca University’s 2007 Convocation, which took place June 7, 8, and 9. The Voice offers its warmest congratulations to all this year’s graduates!

Thursday, June 7, dawned bright and clear. Under the blue Alberta skies, the day’s activities began as usual for most people–but on the rolling green campus of Athabasca University, a definite sense of excitement filled the air. The enticing smell of breakfast wafted through a spacious white tent, a bustle of activity had started in the library, and a host of volunteers was already hard at work–and all for good reason. Today marked the first day of AU’s Convocation 2007.

The convocation ceremonies officially started at noon, but by 10:00 a.m. the parking lots of the campus had already started to fill. At the end of the long driveway, attendants stood ready to direct the crowds, and smiling faces could be seen milling around the grounds and throughout AU’s main building. Graduates, academics, family, friends–everyone shared in the festive mood and was busy with their part in the preparations.

In the main foyer, volunteers were ready to register each of the graduates and special guests. Even before they were robed and ready to begin the procession, the graduates were easy to identify–not only because they seemed to be constantly smiling for cameras, but because they each wore the green-bordered name tag that identified them as grads. AU staff and special guests received blue-bordered tags, and if anyone was in need of assistance, they didn’t need to look far to find one of the many staff and volunteers in distinctive red shirts, all of them hard at work alongside Events Coordinator Mel MacGregor. 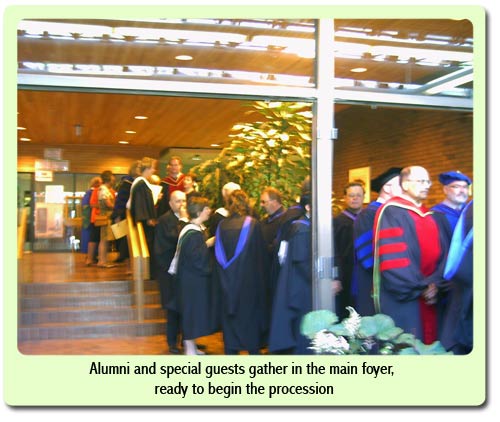 By 11:30, there was a distinct shift in the air. Greetings and picture-taking were temporarily put on hold, and it was nearly time for the main event: the procession into the enormous red-and-white tent that housed the stage and would be the site for awarding the degrees.

A few lingering graduates could be seen dashing down the main hall and into the library, which had been converted into the robing area for the three days of convocation. Family and friends began streaming into the tent, and soon the enormous space was filled with expectant faces, cameras at the ready. High above the crowds, a camera crew was perched at their stations around the sides of the tent, focused on the job of capturing the events and broadcasting them live via a podcast, a popular event that originated at last year’s convocation. 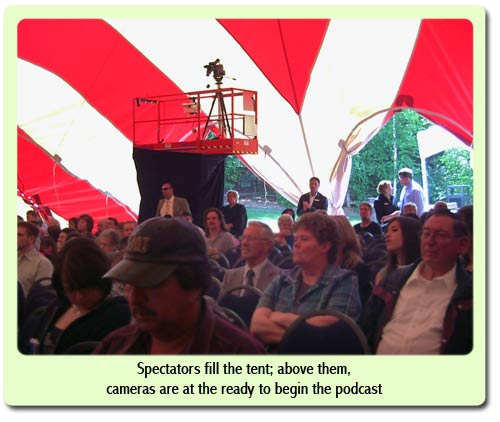 And then, at last, it was time. The audience was asked to rise, and all eyes were focused on the graduates as the procession began to make its way up the red-carpeted centre aisle and onto the stage. Leading the group was Dr. Frits Pannekoek, President of Athabasca University; Joy Romero, who would soon be installed as the Chair of Athabasca University Governing Council; Dr. Bob Fessenden, Deputy Minister, Advanced Education and Technology; and various other special guests and alumni.

In honour of the day’s scheduled recipient of Athabasca’s honorary doctorate, Professor Mandla Makhanya, the stirring voices of the Kokopelli Choir, a South African singing group, were raised in the South African national anthem.

The performance was a fitting start to the day’s welcoming remarks by Dr. Pannekoek, and his address included a statement that reflected the sense of accomplishment and camaraderie in the air: ?People really believe in this university.?

As he shared some remarkable facts about AU, including an incredible 286% increase in total enrolment over a decade ago, it truly brought home the fact that the university’s staff and students are part of a dynamic team working toward a common goal.

The opening remarks continued with official greetings by Dr. Bob Fessenden, followed by George Hawryluk, Councillor of the Town of Athabasca.

The ceremonies began with one of the many special presentations that were to take place that day: the installation of Joy Romero as Chair of the Athabasca University Governing Council. She accepted her new role with evident pride, and her address was followed by the event that so many people had worked so hard to achieve: the conferring of degrees on the first group of graduates. 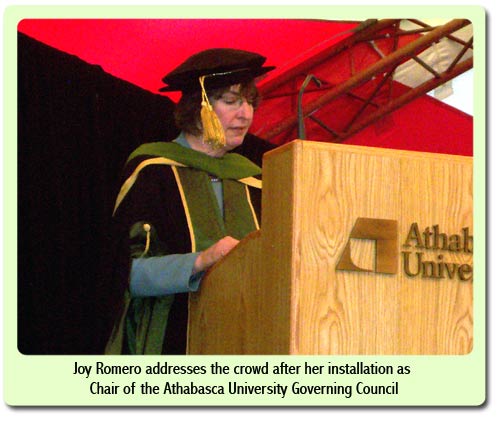 The crowd was hushed as Dr. Margaret Haughey, acting as graduate presenter, asked the graduates to rise and then turned to address the Governing Council with the following petition:

?Madam Chair, Mr. President and ladies and gentlemen of the Governing Council, I present to you the petition that these graduands, having fulfilled all of the requirements of the statutes of Athabasca University, may, with your permission, be admitted to the degrees to which they are entitled.?

Chair Joy Romero granted the petition, President Frits Pannekoek set forth the pledge to the graduates, and, in one voice, they all replied, ?I do so promise.? The conferring of degrees on the graduates of 2007 had officially begun.

Each of the grads approached the front of the stage and, as Registrar Jim D?Arcy carefully laid the colourful hoods over their gowns, the brief bios they had prepared were read out by Dr. Margaret Haughey. It was a personal glimpse into the efforts that each individual had put forth into earning their degree, and their words were humorous, poignant, and heartfelt. 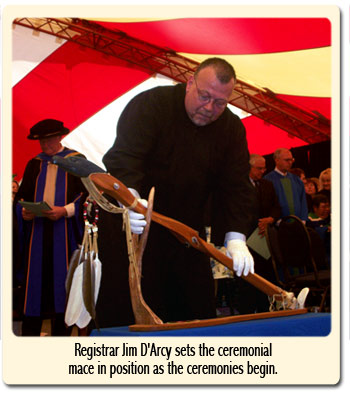 The degrees being awarded on this first day included:

Each group had their own distinctive hood colour, and as the graduates received their degrees, smiles and applause broke out as they returned to their seats wearing the vibrant blues, pinks, greens, and reds that designated them as brand new alumni.

Reading through the program, it was plain to see the incredible array of diverse places that AU students hail from. The Master of Distance Education graduates included students from nearby Edmonton, Alberta, as well as Doha, Qatar and Mystic, Connecticut, while some Master of Arts students earned their degrees in such far-flung locales as York Harbour, Newfoundland and Labrador, and Bratislava, Slovakia.

As the awarding of the first day’s degrees drew to a close, three more special events were planned. The first was the presentation of the Governor General’s Gold Medal. This award is bestowed on the AU student (within each day’s graduating group) with the highest overall academic standing. The minimum GPA required to be considered for the award is 3.5, and on this day the recipient was Kathryn Lee Parsonage, who was graduating with a Master of Distance Education.

Next came the address by one of the graduates, Sheila Jane Hudson, who was graduating with a Bachelor of Arts. In her lively speech, Sheila compared the journey of earning a degree to a recent vacation she took to southern California with her family. As she explained, ?Both journeys required that I consider the resources at my disposal, the scenery I wanted to take in en route and the time frame within which I had to make it all happen. As graduates, we’ve each chosen a destination and plodded along until we got here.? Many audience members and graduates smiled and nodded in agreement, especially as she mentioned how ?there have been detours, transfers, and layovers, but all of us have arrived.? (You can read Sheila’s complete speech at the end of this article.)

The final presentation of the day came as Professor Mandla Makhanya received an honorary Doctor of Athabasca University. Professor Makhanya is the Executive Dean of the College of Human Sciences at the University of South Africa (UNISA), which is the largest university in South Africa, as well as one of the largest distance learning institutions in the world. 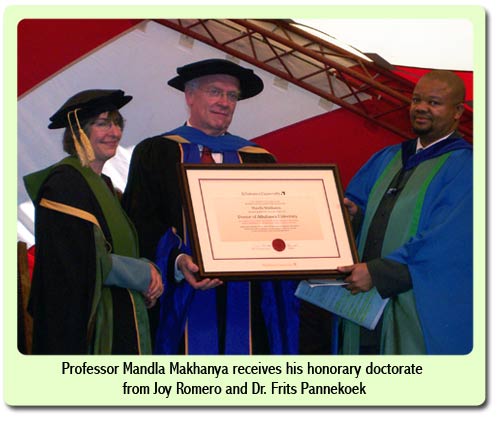 Incredible as it seemed, the first day of convocation was winding to a close, and Joy Romero requested the audience to rise and remain at their seats as the guests and new alumni (just moments ago graduates) began the recession.

Piper Kara Hryckowian took her place at the front of the stage, and as she began to pipe a tune, the platform beadles directed the procession down the ramps at each side of the stage and toward the red carpet that led back along the length of the tent and out into the bright afternoon sunshine.

Friends and family smiled, cheered, and hurried to catch one last picture of the new alumni as they left the stage.

Outside, the crowd quickly dispersed around the grounds, the newly-graduated hurrying to return their robes and rejoin their friends for the delicious lunch of salads, lasagne, and desert (including white and dark chocolate flowing from liquid fountains alongside piles of fresh fruit) that was waiting for everyone in the large food tent.

As everyone enjoyed the beautiful weather and good food, and joined in the congratulations, AU staff and volunteers were already hard at work preparing for the convocation ceremonies that would take place the next day!

Watch for part 2 of Convocation 2007 coverage next week!