This is the second of a special three-part Voice report on Athabasca University’s 2007 Convocation, which took place June 7, 8, and 9. The Voice offers its warmest congratulations to all this year’s graduates!

On Friday, June 8, sunny skies and warm weather once again smiled on the AU campus, and a slight breeze promised to keep everyone comfortable in the giant red-and-white striped tent. Although a sense of anticipation still filled the air, it was mixed with what can only be described as a slightly more relaxed feeling: the first day of ceremonies had gone wonderfully, and day two of Convocation 2007 was well underway.

Once again, the parking lots and campus grounds filled up early, and the tables in the main hallway were a going concern as everyone stopped to decide on their choice of commemorative frames and AU merchandise.

The day’s group of graduates posed for photographs, explored the university grounds, and eventually made their way to the library, where they received their robes, along with numbered slips of paper that designated their place in the procession.

As the graduates made their final preparations, AU Registrar Jim D?Arcy was already standing by, and he caught everyone’s eye as he held the ceremonial mace. Symbolic of the traditional talking stick used by many indigenous people, the mace is beautifully crafted out of natural elements that reflect the power of, and respect due, the natural world. The combination of moose horn, pine, fir, bear claws and teeth, eagle and raven feathers, and stone represent the balance and power of nature, while beads signify the human component and its more transient attachment to the physical world. 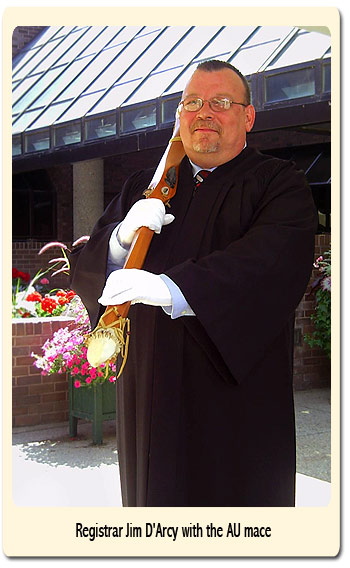 Soon, the practical details of receiving robes and sorting out line-ups was complete. Everyone hurried into place, and the graduates were ready and in position under the long white awning, waiting for the signal to begin. 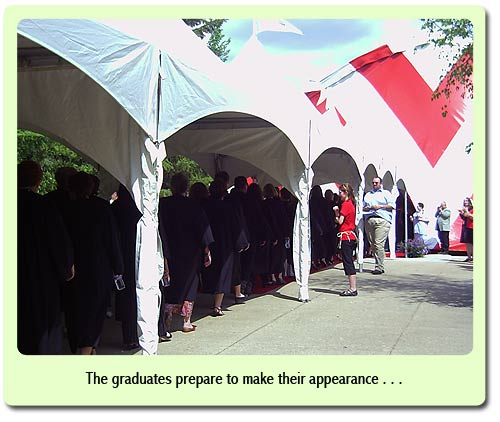 On Thursday, a South African singing group had conducted the graduates into the tent, and on Friday the accompaniment was no less impressive: graduates, academics, and special guests proceeded along the length of the red carpet and onto the stage to the sounds of the Northern Cree Singers. The faint scent of sweetgrass drifted through the tent’s high dome as this aboriginal drum group (who also appeared at the 2007 Juno Awards) performed a powerful song, one that echoed the sense of pride and accomplishment in the ceremonies.

Everyone stood for the singing of O Canada, and Chair Joy Romero greeted guests and graduates with her opening remarks. On this day, she had the pleasure of introducing the Honorable Norman L. Kwong, Lieutenant Governor of Alberta.

He began his lively address by saying that, after observing the tradition of excellence of AU, he was going to go home, get on the Internet, and try taking a couple of courses–starting with public speaking. On a more serious note, he acknowledged the accomplishments of all the graduates and spoke of the many exciting opportunities awaiting them.

Throughout his speech, a member of the Royal Canadian Mounted Police stood at his side, and cameras were flashing as audience members captured the striking image.

His greeting was followed by remarks from Mike Cardinal, MLA in the Athabasca-Redwater constituency, and Paula Evans, Councillor of the Town of Athabasca. Ms. Evans shared the town’s pride in being home to Athabasca University, and invited visitors to enjoy the beautiful surroundings, including the boreal forest. She also noted that Athabasca is named for a Cree word, and means ?meeting place in the reeds.? 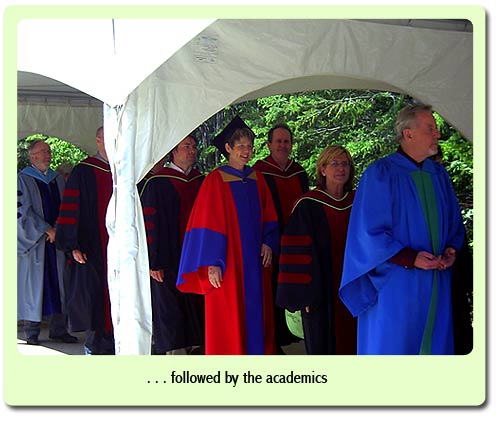 Dr. Frits Pannekoek completed the day’s opening remarks with a reminder of just how unique AU’s vision is, saying that the university is a place for ongoing, lifelong learning, and that student experiences are integrated into the real world. He also noted that 74% of AU graduates are the first in their families to earn a university degree.

Following Dr. Pannekoek’s greetings, a very special guest was inducted to the Order of Athabasca University: Lionel Cherniwchan. He has been involved with AU for a number of years, and along with acting as a public member of Governing Council from 2000 to 2006, he continues to work as an ambassador for the university and to promote it through a variety of activities.

He noted with obvious pride that only one university is accredited in both Canada and the United States–and that university is AU.

After the induction ceremony, it was time for the graduates to shine. Repeating the formal petition that was to take place on all three days of convocation, Dr. Margaret Haughey, the Vice-President Academic, asked the candidates to rise then addressed the AU governing council. Chair Joy Romero declared the petition granted, and the graduates responded to Dr. Pannekoek by agreeing to honour the AU pledge.

The first group of graduates took their place along the side of the stage, and one by one received their coloured hood and their diploma as their brief bios were read aloud.

As the graduates returned to their seats, the stage soon became of sea of colour, filled with the bright peach, blue, yellow, and teal hoods that designated each academic department. 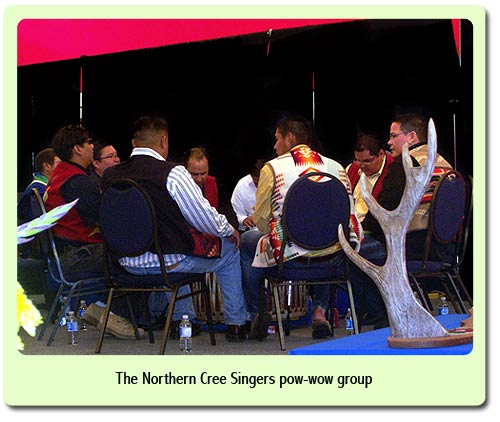 The bios were lively, and served as a reminder that AU students have a university experience like no other. Some graduates wrote of having been involved with AU courses for the past 20 years, while others were proud to have earned their degrees in only 19 months. Some had completed their assignments by candlelight when the power went out, and one Master of Nursing grad had a baby just 6 weeks before writing a comprehensive exam.

These personal glimpses into the life of AU graduates also reaffirmed the fact that the university offers a truly lifelong educational experience: one graduate is expecting her first baby in July, while another is looking forward to becoming a grandmother this summer. 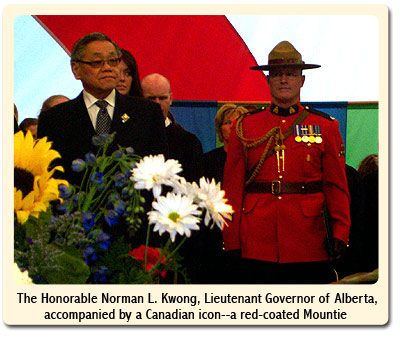 Along with the hard work that went into earning their degrees, AU’s graduates have many other talents and accomplishments to be proud of. The day’s group included a commercial pilot, an individual who recently completed the Boston Marathon, and another who plans to become a nurse practitioner with Doctors Without Borders.

Following the awarding of the degrees, three more special events were planned. The first was the presentation of the Governor General’s Silver Medal to Maureen Burt, a Bachelor of Nursing graduate from Okotoks, Alberta.

Next, the day’s graduate address was given by Janice Dalton. Janice had just received her Master of Health Studies, and she said that it was ?unbelievable to think that while sitting in the comfort of my own home in a small rural community I could broaden my horizons and learn through interaction with a diverse group of health professionals worldwide.?

She also praised the assistance of AU staff in her educational journey, and knows that their ?positive influence? helped her to achieve her success in the program. (You can read the full text of Janice’s speech at the end of this article.) 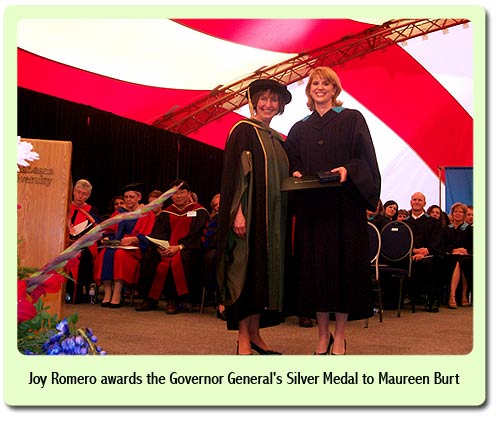 The final presentation of the day was the conferring of an Honorary Doctor of Laws, and the recipient was Johnsen Sewepagaham. An ardent supporter of post-secondary learning, Mr. Sewepagaham’s efforts helped to bring post-secondary education to his community. He has also served as Chief of the Little Red River Cree Nation in North West Alberta, and held that post for five consecutive four-year terms beginning in 1980.

Dr. Winona Wheeler, Associate Professor of Indigenous Studies, introduced Mr. Sewepagaham, and an elder offered a prayer for the occasion. Mr. Sewepagaham praised AU for its excellent methods of delivering education, and he accepted the Honorary Doctorate humbly and with honour. Following the presentation, the Northern Cree Singers performed an honour song.

As the last beat of the drums resounded through the tent, it was time for Joy Romero to close the ceremonies and begin the recession. Piper Kara Hryckowian again took her place at the front of the stage, and everyone rose to follow her as the platform party proudly made their way back along the length of the tent and out into the sunny afternoon. 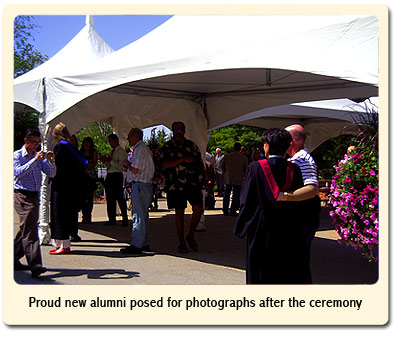 The new alumni posed for photos with beaming family and friends by their sides, and as soon as pictures were taken the robes were returned and everyone headed for the lunch that awaited them in the food tent.

As people slowly began to wander back to the parking lot, degrees in hand, there was a sense that the day’s ceremony marked not just a conclusion but also a beginning. Whether they were looking forward to the prospect of a new career or the adventure of more studies, this year’s group of AU graduates were already busy making plans for what tomorrow–and the future–will hold.

Watch for the conclusion of Convocation 2007 coverage next week! 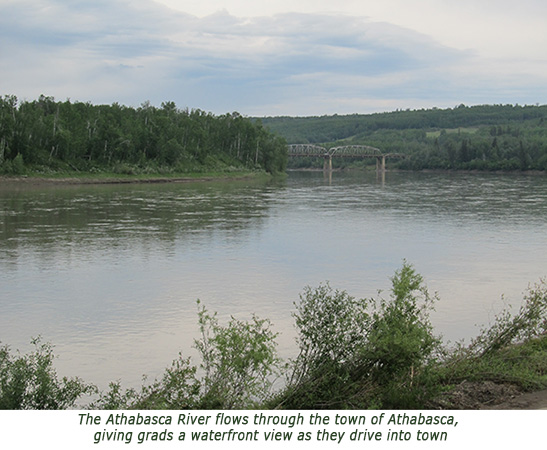 Photo Feature: Around AU at Convocation 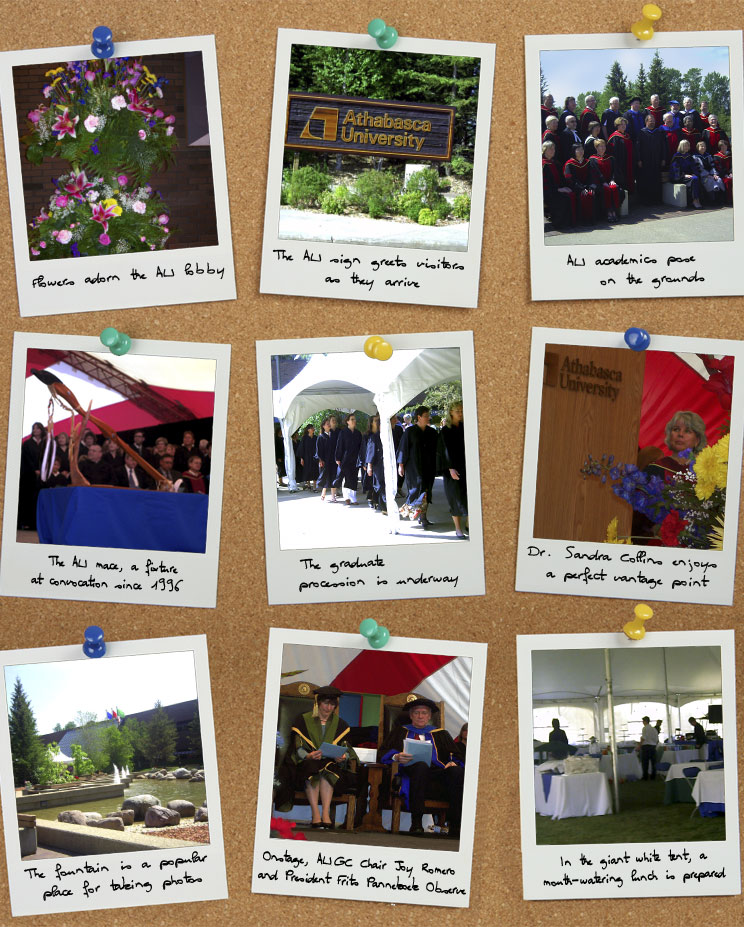