Features
The Voice
Convocation 2007 – Address by Graduate, Part 3 of 3

During each of the three days of convocation, one graduate addressed their fellow students and convocation guests, sharing their thoughts about graduation and the journey that brought them there.

On Saturday, June 9, the graduate address was given by Philip Ferguson, of Waterdown, Ontario, who received his Master of Business Administration degree.

The Voice thanks Philip for sharing the text of his address, which is printed below. 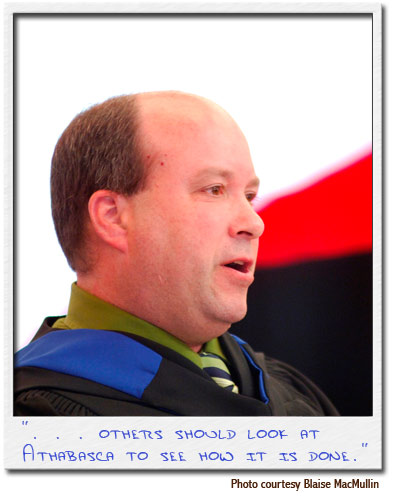 I would first like to thank Mr. D?Arcy for asking me to deliver the graduating address here today. I was both surprised and honoured and quickly accepted. Soon after, the reality of the situation kicked in and I realized that I would be speaking in front of a large number of highly educated graduates and their proud families and friends. I must say, the thought of changing my mind did enter into the realm of possibility, albeit for a brief moment.

Once I realized that the possibility of retreating from my decision was not an option, I began to ponder what I would say here today. What first came to mind was the global reach of Athabasca’s MBA program. It is interesting to note the geographical statistics of the graduating class of 2007. In Canada, eight provinces and all three territories are represented. Internationally, we have graduates from six of the U.S. states and graduates from another eight countries around the world. It is this international perspective from which all students are able to take advantage, through the various Athabasca MBA programs and, specifically, Athabasca’s unique way of delivering their programs. The courses involve a high level of teamwork, which is sometimes challenging given the differing time zones.

Although challenging, it is reflective of the ever-increasing globalization of business where you need to be able to effectively communicate electronically on a global front. The courses enhanced that aspect of communication while the international diversity of fellow students injected a flavour into the courses that would likely not be present in a traditional MBA program. The world’s barriers to trade and commerce continue to be less apparent and it is likely that this trend will continue. It is likely that online MBA programs will grow in popularity, and others should look at Athabasca to see how it is done. Athabasca should be proud of all its staff and consider itself as the benchmark (or the Wayne Gretzky) of online MBA programs on which others should be judged.

I remember the first course in the MBA program–Strategic Management. When the course began you knew that the other students were in the same boat and unsure what the journey would bring. After I downloaded the course material I quickly went to the section that included the mark breakdown. For all the guests out there, generally the courses had a case that was due in or around the fourth week and a final one due at the end. I recall looking at the first case and its requirements. I hope I am not alone here, but when I looked at the word limit on the case I almost fell over–thoughts of ?How many words?? and ?There must be a typo here,? would bounce around in my head. The fact that you could go over in word count by 5% was something that was not a concern at that time. This internal thought process tended to replicate with each course (sorry, bad pun). Mind you, in the end, it was surprising how handy and useful those extra words would be.

Being from the Greater Toronto Area, I would often be on the computer every evening. There were personal sacrifices that had to be made. In the winter months, I would need to decide whether I would watch a Toronto Maple Leaf hockey game or get onto Lotus Notes and work on group cases or the readings for the week. On the bright side, the Leafs were generally quite accommodating once the regular season was over. Note to self–send thank you letter to Mats Sundin.

As touched upon previously, we have quite a diverse graduating class again this year. They come from various areas including companies from the profit and not-for-profit sectors, government, healthcare, and defence, to name a few. Each has had to make personal sacrifices while families and friends had to make certain sacrifices of their own. My teenage daughter had to relinquish the seat in front of the computer nightly?that often didn’t go over too well but there was an understanding of the importance and desire to complete the MBA program. I am certain that we all have stories of family sacrifices in order that our educational goals could be met. On behalf of the graduates here today, I would like to thank family and friends for being supportive and understanding. Sometimes the road was a little on the bumpy side but, in the end, we all know that we couldn’t have done it without you . . . a heartfelt ?thank you? is definitely in order.

The faculty and staff at Athabasca also need to be congratulated on being able to deliver both high-quality graduate and undergraduate programs. Being distance education, there was an original concern that there would be obstacles inherent to such a program, whether it be administrative or in the delivering of the education itself. This concern was quickly erased as courses were well structured and executed smoothly, largely through course planning but also through the high calibre of the coaching staff. Athabasca has been able to effectively eliminate ?distance? and replace it with ?high quality and calibre.?

To my fellow graduates, congratulations . . . we did it! More importantly, we did it with the help and understanding of family who sit across from you today. For those families that could not be here for the celebration, I am sure that they are also just as proud of our accomplishments from afar. Graduates unable to join us today deserve special attention as they likely reside in far-off places and had more of a challenge juggling what I call the ?time zone differential.? In either case, we all appreciate your support and are happy that you were able to join us today.

Now please join me in congratulating the graduating class of 2007! 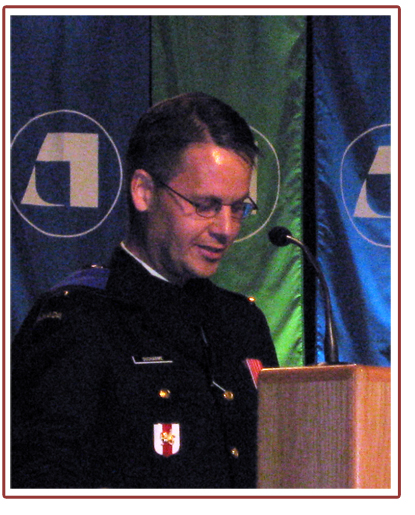 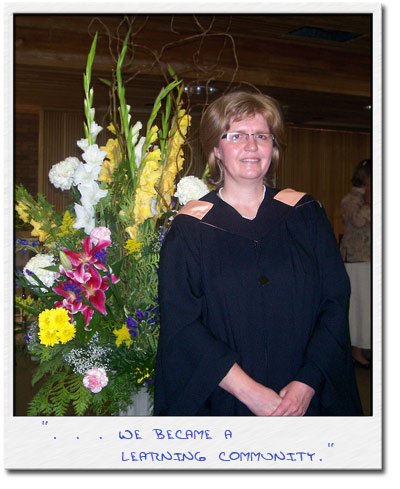 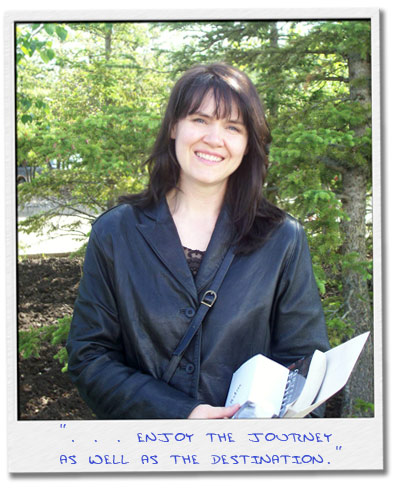