This is the conclusion of a three-part Voice series featuring interviews with some of AU’s 2007 graduates.

For many graduates, convocation weekend was the first time they had seen the beautiful grounds and buildings of the AU campus, and they attended the ceremonies from places near and far, including Surrey, British Columbia, and Nairobi, Kenya.

The Voice would like to offer its sincere congratulations to all of this year’s graduates, and knows that their accomplishments will encourage all those students who are still completing their studies at AU. 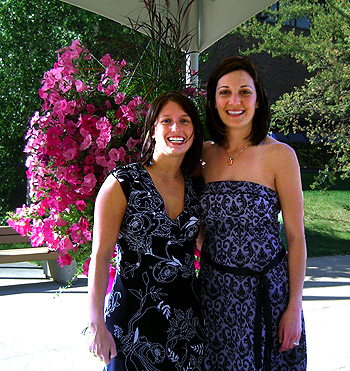 Andrea (left) earned her Bachelor of Nursing degree with distinction, and she attended convocation with her friend Dana Heerschop (right), another Nursing graduate.

Andrea travelled to Athabasca from Edson, Alberta, and her advice to current students is to ?study hard and enjoy your time.?

Andrea has already put her Nursing degree to work in the field. She’s a nurse at the Foothills Hospital in Calgary, and her main focus after graduation is simply working hard and enjoying her career.

Dana (right) completed her Bachelor of Nursing with distinction in three and a half years, and she too has already put her skills to work as a nurse at Calgary’s Foothills Hospital.

She believes that the time and dedication involved in earning a degree is well worth it, and she encourages current students to ?stick with it.?

After graduation, her plans are to relax and enjoy her job. As she told The Voice before hurrying to join the graduate line-up, ?I’m just into this new career and loving it.? 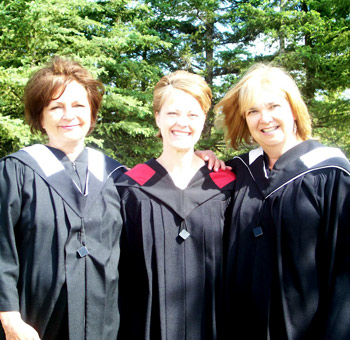 One of the things that Nancy (left) is most proud of in earning her Master of Arts degree was her ability to work ?at a very, very full-time job–I work in the administration at Humber College in Toronto–and getting an advanced degree at the same time.?

She believes that AU’s distance education format played a key role in her success, ?because you don’t have to go out to a class a couple of times a week. Once You’re on a computer you can do it.?

Nancy doesn’t have any immediate plans to continue her studies, but It’s always a possibility. ?I’ll never say no,? she smiled, but added that, for the moment, She’s ?just going to enjoy work.?

For Susan (at centre), receiving her Communications BPA with distinction was reason enough to enjoy the day. But another pleasant surprise awaited her at convocation: she met up with her former college professor Nancy Burt, who was graduating with her MAIS on the same day.

Susan travelled from Petawawa, Ontario, to attend the ceremony, and she says the process of earning her degree was ?tough, but It’s so worth it?–she has recently been hired as a public affairs officer for the Canadian Air Force, and is looking forward to her new career.

Judy (right) travelled from Toronto to receive her Master of Arts degree, and was enjoying the day with her friend Nancy Burt. Reflecting on all the hard work and perseverance involved in earning an advanced degree, Judy says she is most proud of the fact that ?we did it. And we worked really hard, and learned so much, and . . . It’s just fabulous.?

She doesn’t have any specific plans for right after graduation, and as she relaxed and celebrated with her friends, she said that her biggest plan at the moment had simply been the trip from Toronto to attend the convocation ceremony.