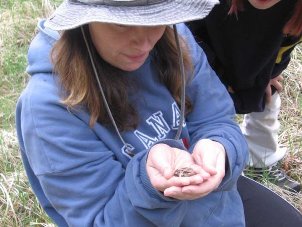 In this week’s profile we introduce Sharon Holtz, a BSc student living in Edmonton, Alberta. She shares how teaching her children helps her study (and puts them ahead of the curve!), offers encouragement to students experiencing difficulties, and tells how her own struggles and setbacks have made her all the more determined to succeed.

Sharon, who is studying biology and chemistry, enrolled in AU’s Bachelor of Science program a few years ago. ?I chose AU because life cannot wait while I attend school for [four] years,? she explains. AU was the ideal choice for her, since it allowed her to carry a full-time job and raise her three children while working toward her goals.

Shortly after, however, personal circumstances caused her to fail several courses. ?Life hit me with a few things I couldn’t deal with, and school got dropped,? Sharon says. She put her education on hold until she felt she could commit ?financially and mentally? to her studies. At this point, she notes, ?I’m back to square one in some respects.?

That hasn’t dampened her drive to complete her degree, however. On the contrary, her problems have made her desire for education stronger. ?You can look at the struggles as something that can demotivate you, or you can look at them as something that propels you into action,? Sharon says. ?Through all of this, I find myself still wanting to finish the degree and pursue the rest of my goals.?

Sharon is working toward a very specific goal: she hopes to attend medical school after graduating. It may be a lofty goal, but It’s a persistent one. ?Every time I’ve tried something else I’ve hated it, and I am drawn back,? she explains.

How does she manage school, a full-time job, and three children? A good plan helps. ?My day generally starts around 6 a.m. when I make time to spend with [my] spouse,? she says. During her lunch hour at work, she spends time previewing the chapter she will study that evening. ?After supper . . . I hit the books for three to four hours if possible,? she adds.

This means that she and her children (ages 17, 14, and 12) often end up doing homework at the same time. In fact, under Sharon’s guidance, the four have done many of her chemistry labs together.

?I find that if I can explain it to them, I somehow remember it better,? Sharon says. ?I had my daughter model some of the molecules that we needed to build . . . to help remember the carboxyl groups, aldehydes, etc.?

Not only does it help Sharon digest the material, it also allows them to have a little fun. ?Sometimes as a mother I feel like I’m being selfish in reaching out for my goals,? Sharon says. ?It’s a good way to combine both.?

At the same time, Sharon takes the opportunity to teach life lessons along with the chemistry, particularly regarding the importance of education. ?I tell them constantly how I wish I’d taken the opportunity to finish school in a quicker fashion.?

In addition to her already busy schedule, Sharon also plays goal in local hockey leagues. She’s found that the action gives her a way to release tension, especially before a big test. ?When I wrote a bio final at the end of last month I played hockey the night before . . . [which] seemed to release all the stress and apprehension I had,? she says.

Sharon feels that the independence that comes with studying by distance is both a positive and a negative aspect of distance learning. It ?allows you to be in total control of the amount [and] quality of learning you get,? she says. It also allows the student to allocate more time to the more difficult courses. On the other hand, she feels that motivation and commitment to studying often wane over time. ?Because of the mode of instruction,? she advises, ?procrastination becomes your worst enemy.?

While AU students may be confronted with many different struggles and setbacks while pursuing their educational goals, Sharon feels that this is an important part of the growth process. She uses an interesting analogy: ?If you think of it in a fiscal sense, the stocks that do the best in the market tend to rise and fall a lot,? she says.

Furthermore, she feels that difficulties help students to figure out what they need to change in order to work more efficiently toward their goals. After dealing with her own struggles, she believes that she is better able to deal with ?the slumps? when they arise. ?I take that desire and harness it, and I push myself towards the end goal,? she says.

Athabasca University ?will give me the skills to be successful,? says Sharon. But in the end, she says, It’s your ?struggles and what you do with them [that] indicate whether you will succeed or fail.?

The Creative Spark!—Getting Into Character