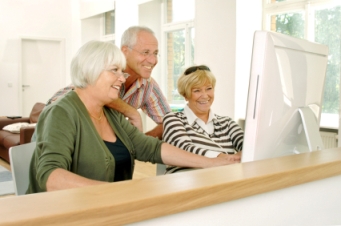 When my mother died, my father was 71. She’d suffered a brain injury and he’d been her primary caregiver 24/7 for the previous 15 years. When she died, he was lost. Then he found computers. This was back in 1996, when the Internet was really starting to take off and the 386 personal computer was new!

Dad had been a mechanical engineer in his younger days and his way of becoming familiar with computers was to buy an old 286 model, take it to bits, figure out how it worked, and then put it back together. He went on to add more memory, a CD drive, and he figured out how to work it so that he could play his favourite musical LP records (remember those?), upload them to the computer, and copy them to a CD.

If he emailed my brother and me and we didn’t respond within 24 hours, he was annoyed. He downloaded games and software at three in the morning (?I’m old, I sleep during the day.?)

He was devastated when he failed a year-end exam on computer-aided graphics at the local adult education centre. (Wouldn’t you think they’d have passed him just for turning up at age 74?) When he died in 2002, he knew more about computers than his two ?kids? and most of his grandkids did.

That’s the great thing about learning; it has no age limit. There’s no governmental rule (at least, not yet) that says you can’t learn after a certain age.

I first went to university in 1975 when I was 21. (Okay, so you can do the math; don’t look so smug.) I felt old. I was in a class where the average age was 19, but I’d worked in the finance industry for five years before getting there. These folks came straight from high school. However, there was a woman in my German class who was easily in her 60s and she was taking an undergraduate degree, majoring in German with a minor in Chinese. It wouldn’t surprise me to learn that she was studying Urdu in her 90s.

The challenge for many mature students is to keep an interest in a course that has obviously been designed for a younger age group. My French courses are a prime example; there are questions for the assignments such as: ?How would you dress if you wanted to impress someone??; ?What characteristics do you look for in a new boy/girl friend??; and, my favourite, ?Do you clean your room regularly??

Trying to explain to the tutor in French that I can’t remember the last time I had to, let alone tried to, impress someone, that my last ?new? boyfriend was about 25 years ago, and that if I didn’t clean my room no one else would, is a challenge.

There are advantages to being an older student however. When I’m expected to write a contemplative essay for English 353, I’ve got a much longer time horizon to contemplate on. If I need to do an expository essay, I reflect back on the 18-year-old woman I hired as a summer worker one year and how I had to teach her the step-by-step wonder of office filing. A very bright and articulate teenager, the importance of following the alphabet was sometimes lost on her. She has since told me that although she struggles from time to time with her studies to be a doctor, she can at least put all the medical terms in alphabetical order in a nanosecond.

And it never ceases to amaze me how much-younger students are so patient with the daft questions I have to post on the computer science forums. (Where’s my Dad when I need him?) It’s like there’s a notation next to my name that says ?Old fogie alert; be kind.? And I’m very glad they are.