Columns
The Voice
From Where I Sit – Delete

This morning I spent too long cleaning up my email. There were 14 messages to read. Well, not messages exactly; more like forwarded jokes, video clips, and links to YouTube or other sites. There weren’t any real pieces of genuine communication. You know, the whole reason email was supposed to exist: to offer a cheap, effective, efficient way to stay in touch with loved ones far away; the reason for the demise of stationery, postage, and legible handwriting.

There was the anti-spam folder full of crap to discard. There were some folders of saved and sorted emails to delete. Emails that I had once believed deserved some of my precious hard-drive (and mind) space?emails I believed I’d go back and re-read. There were hundreds of deleted items to put into trash. Normally this is quite an annoying, mindless, time-consuming exercise. Not to mention a welcome delaying tactic when I don’t want to tackle a more pressing job.

Except this time was different. This time I noticed some disturbing stuff.

Oh sure, I’m still disgusted by the emails selling penis-enlarging products and angry they keep finding their way into my inbox. That’s nothing new. I’m still ticked off by the ads selling online pharmaceuticals, and know the counterfeit ones sometimes claim lives. I’m still angry that phishing emails exist to trick and victimize the less savvy. Nothing to see here, folks . . . keep moving.

This time was different because I finally acknowledged something insidious going on. You know how you feel in a social setting or maybe even the office when someone tells an off-colour or other equally offensive joke? Or circulates a cartoon degrading someone or something? Or maybe it’s a serious debate or water-cooler conversation about something in the news.

In your heart of hearts you’re offended, embarrassed, ashamed, or pissed off but lack the moral courage to speak up. I know I’ve been guilty of nervous laughter, a dirty look in the direction of the offender, or silence. Gotta make nice, you know. Keep the peace. Bite your tongue. Poppycock.

A lot of emails I receive have an agenda. Sometimes it’s noble and right-minded, like promoting gratitude for the troops. Other times it’s off the wall and wrong-headed. Right now a lot of people have their knickers in a knot over the increased pressure to be politically correct by saying Happy Holidays instead of Merry Christmas. They see a conspiracy theory. A them-versus-us. Who the hell is them? Or even us, for that matter?

The fact Canada is made up of many people of many cultures is a good thing and not a reason for panic. Not everyone is a Christian. Not every Christian is practicing the tenets of his beliefs. Isn’t tolerance supposed to be the name of the game? I don’t get the fear about turbans, Kwanza, women getting the vote, Hanukkah, Alberta drivers, hijabs, Saskatchewan’s success, or whatever the perceived offence of the day is.

Show me a people who haven’t been tormented for their beliefs, for their very being-ness. At some level, at some point in our ethnic or gender history, we all understand persecution, intolerance, hatred. Why on earth would we be party to it now at someone else’s expense? How about taking the time to figure out what the appropriate greeting is for a particular person? It may be Kristos Razdayetsya for me. Or the Feliz Navidad I said to the Spanish cashier at Winners. It may even be Merry Christmas. All I can say is thank God for delete, from where I sit. 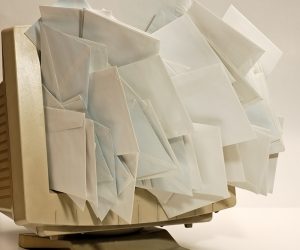 From Where I Sit – Just for Today