Columns
The Voice
The Mindful Bard – The Jimmy LaFave Interview

Jimmy LaFave is a folksinger-songwriter who was born in Texas but spent his late teen and early adult years in Oklahoma. He has performed in Canada, the United States, and Europe, and has had a devoted following for the last two decades. For a review of his latest CD, Cimarron Manifesto, see last week’s Mindful Bard.

Are you happy with Cimarron Manifesto?

Oh, yeah. It turned out the way I expected. Some of my CD’s I’ve done a little quicker. To make a CD you need two things: a plan, and not enough time.

That touches on another question?what, for you, are the best conditions for creativity? I take it a time crunch is part of the mix.

Dylan has that great quote, that chaos is his friend. I like a little bit of chaos when I record. A mix of musicians come together and we all come up with ideas. Nothing’s set in stone. I don’t put music charts in front of them and say, ?Play this, play that.? I guess spontaneity is a better word than chaos. There’s a couple of songs on Cimarron that I totally started over, from the basics. You just cut the rhythm tracks first, then the bass and the drums. Then you can add whatever you want?fiddles or dobros or electric guitars.

You had a hand in the production.

I’ve produced all my records. When I first started recording I did it because it was cheaper. Then I just continued with it. I usually take a lot of input from the people involved.

Does it help to have the right people or do you tend to get along well with everyone?

We recorded in this studio here in Austin called Cedar Creek. They’ve done some great records there. The Dixie Chicks even did a record there. Fred Remmert, the engineer?I really trust his ears. He’ll say, ?That take didn’t really have the magic of the last one,? so we’ll do it again.

Why did you decide to record Donovan Leitch’s ?Catch the Wind?? 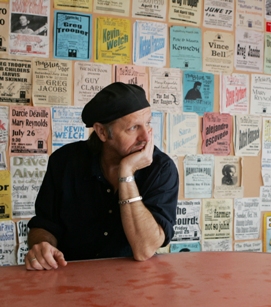 I always really liked that song. You know that Dylan documentary, don’t Look Back? Dylan kind of disses Donovan in a way. I really like a lot of Donovan’s songs. But I think the main reason I did ?Catch the Wind? is that it popped up on a car commercial a couple of years ago. It was sad because a lot of people probably thought it was just a commercial jingle. I always heard it in my mind at a slow tempo. And since I recorded it I’ve seen it on another commercial, for wind power or something. According to Eric Peltoniemi, the president of Red House Records, there’s a Donovan connection to Red House. I think maybe they have a label that he recorded his last record on. Someone took the time to play him my version and he really enjoyed it, so that made me feel good, too.

What music have you been listening to lately, besides your own?

I’ve been listening to all kinds of stuff. When you travel around you get a stack of things, so I just put them in and see what clicks and what doesn’t. I tend to listen to a lot of older stuff too; I always have some Dylan with me on road trips. I recently went to a music conference in Nashville and I ran into a lot of people so I had a whole stack of CDs.

You get to listen to a lot of new stuff.

Yeah. One of my favourite new songwriters is a guy here in Austin named Sam Baker. He has a CD called Pretty World. It’s a really beautiful CD. Sam’s not like some virtuoso guitar player or singer. He’s kind of a poet that puts these little poems to music. Unless You’re looking for someone to be singing perfectly, with vocal gymnastics and everything, you’d really like Sam Baker. He has a really interesting life story. He was on this train in Peru which some terrorists bombed, and the bomb blew up in the same car he was in. He lost part of his hand, but he was lucky to come out alive. He hosts a little thing here every Monday night here in Austin. He’s finally blossomed in the last year. People have known about him for a while but I think the time is coming for him to be known as one of America’s next great singer-songwriters.

Have you met Dylan?

No. I was in the same room with him one time but I didn’t really say anything to him. My friend Steve Ripley in Oklahoma actually played in his band for a couple of years, and I’ve known people who’ve been really close to him.

I usually go up to Oklahoma, where I grew up. I was born here in Texas but my family moved to Oklahoma. I like to do photography because That’s something you can do on your own, you don’t need anyone to help you with that.

What state was the most musically stimulating for you, Texas or Oklahoma?

Definitely Oklahoma. A lot of the artists who come here to Austin are actually from Oklahoma. I don’t dare say that in Texas; they have this thing about everything being bigger and better in Texas, but really Oklahoma is more musically fertile. I really like going to the Woody Guthrie Folk Festival there. You get to hear some great stuff and play with a variety of interesting people, so That’s very stimulating.

What was on your mind when you wrote ?These Blues??

It was a composite of experiences with friends and loved ones. Sometimes people ask me, ?Do you know what you wrote?? and I don’t really. It’s just what comes to me and I don’t analyze it too much.

Was ?don’t Ask Me? the result of a personal experience?

My band is made up of a bunch of pretty intelligent people; we all have inquiring minds, and when we’re travelling together we often get talking about a lot of things. We know different people hold to specific religions or political beliefs but we’re very open-minded and we don’t really stick to any belief system, even though we are pretty cohesive in our political views. We observe a lot of things, and we get talking about the way the country’s going, and what Bush is doing.

You sound like Canadians. Especially the part about Bush. Is your name an Americanization of Lefebvre?

Yeah. My people are actually from Quebec and came down to North Dakota years ago.

In the song ?This Land,? there’s a line, ?I simply want my country back again.? Was there ever a time when you felt the country was yours?

When I was younger. The past few years have been really bad here. George W. Bush has removed more freedoms than any president I ever knew. And people here in Texas are so apologetic for him because he used to be governor here; they’ll say, ?It’s not him, It’s his administration.? I just don’t know. I know musicians who’ve worked for Bush and they describe him as a regular guy. His administration is definitely very secretive and unaccountable.

Would you say You’re all mostly left wing, right wing, or??

As Woody Guthrie says, ?Left wing, right wing, chicken wing.? I keep my mind open. Whatever you believe, It’s all a mystery in the end.

The Mindful Bard – Jon and Roy, Another Noon