Features
The Voice
Editorial – I Spy

Remember I spy? No, not the television show; the game that kids play, the one where somebody picks an object and the other players guess what item they’re thinking of. Well, it seems there’s a new version of the game and It’s turning out to be more popular than ever; the only trouble is, you might not know You’re playing.

Most consumers are familiar with the standard tactics that retailers and manufacturers use to gather information. Want to tell them how many pairs of underwear you’ve bought in the past year, or maybe when and where you buy your toothpaste? Easy?just use your customer loyalty card, the one that gives you points to trade in on more stuff. Want to give your bank a detailed list of where you shop, what you buy, and a pretty good idea of what other services they can target to sell you? Simple?just reach for your trusty credit card. The details of what you toss in your cart get added to the database with every swipe of the plastic.

We all know this is a trade-off. They get something, we get something. (The fairness of this exchange is disputable, but let’s leave that for another day.)

The point is, consumers are aware of it. They control the decision to get?and use?those ubiquitous rewards cards. They choose whether or not to swipe their credit card. they’re giving up personal information, minute details about the things they eat, wear, and use, and they’re doing it willingly.

But what happens when the information You’re giving away is tied to an invisible device, one that can track your movements wherever you go and send that information to the store (or bank or government agency)?

If all that sounds a little too science fiction, It’s not. It’s called Radio Frequency Identification (RFID) and if the companies that make your clothes and shoes and toilet paper have their way, it will be coming to a store near you.

RFID tags are tiny integrated circuits. they’re small enough to be inserted into a library book, a piece of clothing, or even a credit card without being detected. Using radio signals, the data on the tags can be read by a wireless scanner?in the case of UHF tags, from as many as 5 metres away.

They’ve been around since World War II, and they’re great for tracking just about anything that gets moved anywhere?from tracing pallets of barbecues shipped around the world to keeping track of stock in your local hardware store.

But unlike a UPC barcode, RFID tags don’t just contain a number that identifies what kind of product they’re on. Instead, RFIDs carry a unique identifying number for each individual item?that means that for every T-shirt or pair of jeans on the store shelf, the embedded RFID has its own code. In future, every consumer product in the world could carry its own unique serial number.

For information on the RFID tag to be scanned, all it needs to do is pass within a few metres of a reader, a device that can be installed in shopping malls, airports, office buildings?virtually anywhere. And you don’t need to place the tag in plain view of the reader; the information on it can be picked up through clothing, purses, or briefcases.

So what does all that have to do with the next pair of yoga pants or running shoes You’re thinking of buying?

Nothing?unless, like millions of consumers every day, you pay for them using a credit card, debit card, or swipe your customer rewards card at the checkout. In short, until you create a link between your personal information and the unique RFID tag on the item You’re buying.

Let’s suppose you buy a new pair of shoes that has an RFID tag in it. If you pay cash (and don’t collect points with a loyalty card), no problem. Any readers you walk past?at the mall, an amusement park, the office?can scan the information on the shoes but they’re still just a pair of shoes. The embedded tag can tell the reader when and where they were made, what colour or size they are, and what store they were sold in, but there’s still nothing to link them to the movements of a specific person.

Once you’ve tied them to your identity, though, things get a little more invasive. Those new tires you bought with your credit card can tell the company where you went on vacation, or how many times (and when) you drove on a particular highway. That new purse You’re carrying can feed RFID scanners lots of information about your movements throughout the day?the only limitation is how many scanners are installed and where, and, of course, just who’s collecting the information.

Right now, this kind of consumer-level surveillance is still being closely monitored. In the executive summary of a report by the non-profit Public Interest Advocacy Centre (PIAC), the agency notes that Canada’s Personal Information Protection and Electronic Documents Act (PIPEDA) currently limits the use of RFIDs for tracking consumers. Retailers are required to ?obtain the informed consent of customers? before using or disclosing information That’s been gathered by tracking them through RFIDs.

The potential for misuse of RFIDs has also raised the interest of Canada’s Office of the Privacy Commissioner; OPCC has ?asked retailers for details of their planned RFID uses.?

But the rules, as the old saying goes, are made to be broken. Just ask Metro AG, the large European-based retail chain that decided to start implanting RFIDs in the customer loyalty cards they issued?without telling those same loyal customers. Even if a customer never takes the card out of their wallet, their movements in a store and the number of visits they make can be tracked by readers placed throughout the company’s stores.

True, this fast-growing technology has a lot of benefits. Along with streamlining shipping and inventory tasks, It’s now possible to buy smart appliances. By reading the RFID tags in your cartons of milk or eggs, they can tell you when You’re running low on something, or the food in the back of your fridge is about to expire. RFID-enabled washing machines exist that can read the tags in your clothes and, by quickly computing the mix of colours and fabrics, display a message warning you that You’re about to toss those brand new jeans in with a load of white T-shirts.

Yes, Will Robinson, the future is here, a heady mix of virtual and real life, of Star Trek-like gadgets and Big Brother watchfulness.

And if you just can’t shake that strange feeling that someone’s watching you, well . . . 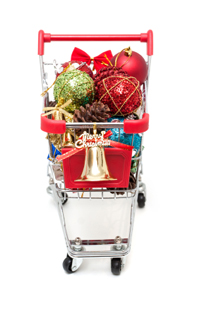