As part of her translation studies, Tanja Ahlin participated in an exchange program that took her to Paris. In a five-part series, Tanja treated Voice readers to a glimpse of this magnificent city through her camera lens. This photo feature originally appeared July 13, 2007, in issue 1526.

As my second semester of studying in Paris was coming to an end, I decided it was time to revise my experience and my impressions of the French capital. Not surprisingly, I was not very enthusiastic about my leaving. One of the greatest cities in the world had become my home for almost a year. I had the chance to get lost in its alleys, uncovering its secrets off the beaten tourist tracks. I found my favourite café for the morning caffeine boost and my favourite bar for the evening cocktail; the best whole wheat bread; and the sunniest spot by the Seine for an afternoon picnic with a view of the Notre Dame cathedral. I have seen the colours of Paris in every season. And this is but the beginning of the pleasures of Paris.

As I was not obliged to take many courses and pass a number of exams at my university in the suburbs, I had time to stroll around other Parisian schools and grands écoles, a group of the most prestigious French post-secondary institutions, to see what they offer. There are twelve universities in Paris alone and a number of other educational institutions. Thus I attended some classes at the famous Sorbonne whose inner court, which you can only enter as a student, is even more impressive than its front, overlooking a fountain and a square where students gather at lunchtime. 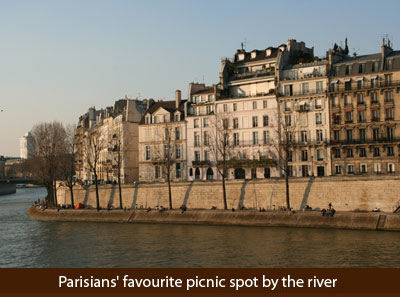 Some of the lectures I was interested in took place at ENS (Ecole Nationale Supérieure), a peaceful sanctuary right behind the Pantheon with a garden and a fountain. The courses were quite demanding, especially as I was missing some of the basics in philosophy (not to mention my insufficient knowledge of French terminology in this field). However, just to hear some of the well-known philosophers speak made me feel I was not only in the heart of the French capital, but also in the heart of French thought.

I also attended some lectures in linguistic anthropology at EHESS (Ecole des Hautes Etudes en Sciences Sociales) where I was fascinated by several presentations made by visiting professors from the U.S. In Musée du Quai Branly I listened to lectures by a couple of French professors, a dance choreographer, and an Australian anthropologist. And in the auditorium of the impressive Collège de France I attended some free public lectures on history and democracy. I believe that in terms of academic and learning pleasures Paris is hard to defeat.

Another aspect of the French capital to attract people from all over the world is art in every form. Each week you can buy Pariscope, a magazine with every possible event taking place, for just a couple of cents. I saw a number of plays, concerts, and films, but there were a couple of them I will remember better than others. 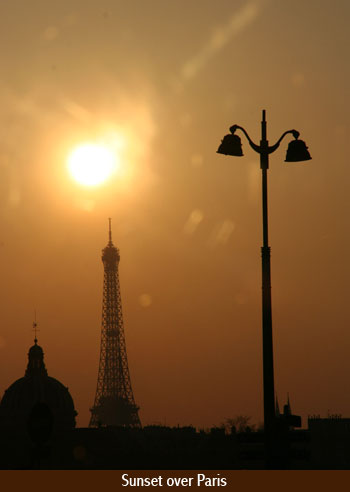 The first of them happened on a windy Sunday when we were strolling around the biggest marché aux puces (flea market) in Europe, just north of Porte d?Orléans. After rummaging through yellowish books, crumpled bank notes (we even found some Yugoslav ones), rusty railings, and dusty but firm furniture that could still be very much in vogue, we were ready to set off to the metro when we suddenly heard some loud jazzy music coming out of a small bar. We stopped for a glass of lemonade and surrendered to the sounds of two guitars while outside the storm burst. The musical pleasure of Paris–unexpected, unplanned, and unforgettable.

A few days before our leaving, we also had the chance to enjoy Fête de la Musique, the music festival. After a glance at the never-ending list of concerts, I gave up on looking for something special, so we just walked up the Latin Quarter once again. It proved to be the right thing to do, as everywhere you went music just filled your ears and people were dancing wherever they could.

Together with some of our friends we settled at a square where Zoran, an immigrant from Belgrade, Serbia, and his group were playing rock and were indeed good at it.

As the custom is in Paris, where parties often end when it is time to catch the last metro at one o?clock in the morning, all concerts stopped at midnight. But on our way back home, we bumped into a group of drum players. Their beat seemed to be addictive for we not only stopped to listen, but even followed them up the Rue Mouffetard again. Our procession grew along the way as more and more people with tired, sleepy faces suddenly became revived at the sound of drums and turned around on their heels to join us. For a moment it seemed as if a breeze from Brazil drifted over Paris, making everyone forget the lightening sky that was already announcing another working day. 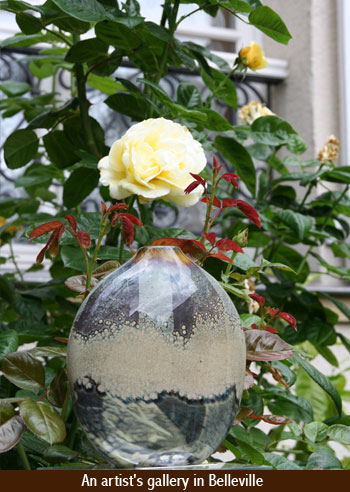 Then there was the weekend in Belleville, a quarter in the northeastern part of the city, when the local artists opened their studios, which were often parts of their own apartments, to the public. Armed with a map specially designed for the occasion, we climbed the narrow staircases of buildings too old to have escalators installed, poked our noses into people’s homes, discovered what is usually hidden behind enormous blurred windows and high stone walls, and explored the most diverse artistic talents.

The pleasure of staying in Paris for a while also lies in small discoveries you cannot afford if you only come for a couple of days. We spoke to a Slovenian tourist guide who knew but the main Parisian tourist sites–the Louvre, Palais Royal, Notre Dame, Versailles, and, of course, the Eiffel Tower. The queues to climb the latter are never-ending at any time of the day on any day of the week. On the other hand, there was nobody at the ticket office to mount the 56th floor of Tour Montparnasse in forty seconds. The panoramic view is just as breathtaking and you can include the Eiffel Tower itself in your picture.

Then there is Arènes de Lutèce, the Roman amphitheatre in the 5th arrondissement that the city authorities wanted to transform into a dump but that Victor Hugo fought to have preserved. Concealed by the surrounding buildings, it now serves as a park where the locals eat take-away pizza and children play soccer on Sundays. And then there are the carefully tendered secret courtyard gardens behind virtually every heavy wooden door, often dating back to the 19th century, that seem impenetrable to a passing tourist. In reality, you can enter many of them by simply pushing the button on them and in the next moment you are surrounded by un-city-like peace. There, you can easily feel like Alice in Wonderland, and experience the pleasure of discovering a faraway countryside in the heart of what appears to be a stone-cold city. 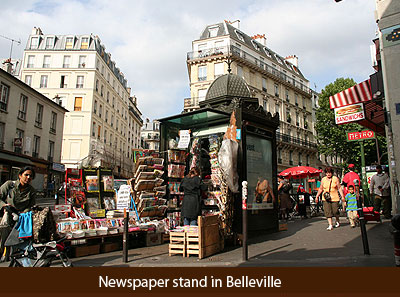 During all those months, I also got to know some Parisians and was often mesmerized by their views and lifestyle. However, what I admire most about them is their ability to take a day’s moment for themselves; to stop, look around, and become aware once again of the pleasures their city has to offer.

Not only do they learn to keep balance while reading at the metro during the rush hour, they also know how to sit down for a glass of red wine after work, in company or alone, just to ponder their day while watching the sun set over the Seine–the pleasure of grabbing your self by its tail in a half-hour meditation before you get lost in the city crowd once again. 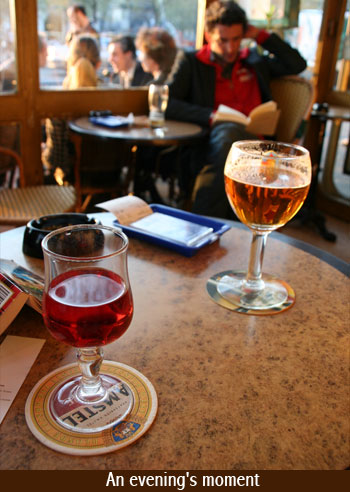 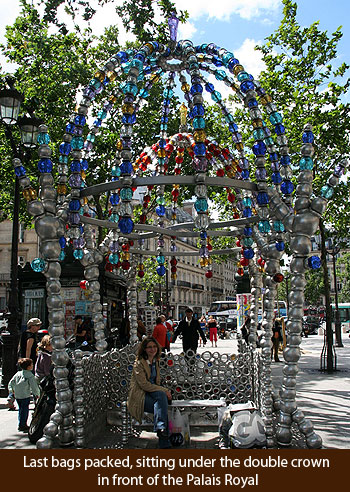