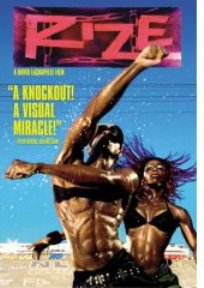 Any experienced bargain hunter knows there are vast treasures beyond their wildest dreams stashed away in every pile of useless junk. Music is kind of like that; a big garage sale where there are a million old bent lamps and stuffed parrots for every copy of They Live! or Jesus Christ Superstar. Well, now it’s time to dust off your pith helmet, pull out the Coleman lantern, and push Lara Croft out of the way: we’re going hunting for some DVD reviews!

Cultural evolution’s wavelength seems to have gotten much shorter lately. Where a culture’s mode of dress and style of life once lasted generations, now it seems every change in culture is a fad, dying out after only a few short years and replicating itself again in some other bizarre way only a few years later.

This is the story of a community in South Central L.A. where gang violence has been replaced with people in clown costumes dancing tough in each other’s faces. While this is technically a feature documentary, music plays a big role. The dance-off, or ?krumping,? generally consists of spastic mid-air thrashing, though there are elements of breakdancing and even tap.

The really amusing part is the faces the krumpers make while having epileptic fits to Jay-Z, which only barely beat out the faces they make when they lose. For anyone interested in cultural anthropology or goofballs dancing around in clown makeup, this is a surefire crowd pleaser.

In his early 20s, Herman ?Sonny? Blount was a successful jazz bandleader with plenty of paid work who had won band contests and scholarships. Then one day he took a trip to Saturn and returned as a fat man who liked to wear blue chalk on his face and chain-mail lampshades as headdresses. The Sun Ra story is interesting, especially to read or hear him talking about his personal interplanetary experiences; if this guy was a cereal, he’d be whatever kind has the most nuts in it.

The DVD is a real letdown in that it only covers the last year or so of Sun’s life. Rather than spanning his impressive career, it consists mostly of pointless ramblings from an unhealthy looking Sun Ra who just goes on and on about mysteries and Egypt and Saturn.

There are some great live music scenes, but they’re interspersed with a lot of shots of a sad and confused band who don’t seem to know what’s going on any more than their leader, who has professed that he is an alien mystery intelligence here to enlighten our magical energy waves with jazz power. One thing that should be noted is the accuracy of the title; Sun Ra grins like a demon through the whole movie.

Ice-T is one of those rappers that nobody can really say anything about because whether or not you believe in his constant threats of painful death, you just can’t be certain. I don’t really care one way or the other about his music, but I still say a prayer for him every night before I go to sleep in the hopes that this will prevent him from keeping his 12,000 promises to murder me with those crazy-ass eyes and some kind of weapon named after the small numbers on a price tag.

This DVD is a reunion tour for Body Count, and during the interviews they tell us that there are only two members from the original band left in the reunion. So It’s not a reunion. It’s an excuse to hire a girl to walk around topless on stage night after night and get groped by a guy who built his career on being a gangsta cop killer and who now plays a detective on prime-time TV.

This compilation DVD contains almost no grindcore. It does have a bit of brutal heavy metal, but there’s definitely not 85 minutes? worth. I recognized a few of the band names so I picked this disc up thinking it would be pretty sweet. Well, I now own some footage of doofuses with fake vampire teeth and fingernails too long to make eating with utensils possible. Here’s a band-by-band review:

Morbid Angel: Great old-school band. Not exactly grind, but still awesome. The interview gets a bit weird when the singer starts trying to explain that he lives inside a teacup in his head and that we all live on a saucer beside the tea cup?and he’s serious.

Nocturnus: These guys fell out of an American Gladiators audience. They play synth-driven epic-solo-boredom-core and pretend to be tough with keyboard mullets. Ewww.

Paradise Lost: I lasted about 3.2 seconds before hitting ?Next? and when I do that I always yell ?NEXT!? really loud so the scene knows how I feel about it. Paradise suck.

Prophecy of Doom: Dreadlocks and ?Free Tibet? shirts are not appropriate metal apparel.

Godflesh: Mediocre industrial is about crappy drum machines and sounding bored. It’s definitely not about ?changing music.? Go back to your mom’s basement in Iowa.

Sonic Violence: According to the interview, these guys want you to poop your pants.

Vengeance Rising: Crap, I said hallelujah too soon. This is a PSA for the Christian-Bands-Can-Be-Scary-Too Coalition. The music’s pretty sweet and the video is totally evil with candles and skulls, but this guy keeps talking like Pinball Clemons.

Entombed: One of the most original bands in death metal ever. Still not grindcore, but worth buying the DVD just for this live footage. No interviews, just video filters.

Carcass: The only actual grind band on the disc aside from Napalm Death is Carcass. Not only are they the first grind band ever (according to the Official Grindcore Society of the World) they’re also the only all-vegetarian band of ex-morticians I’ve ever heard of. They do their interview sitting in front of giant projections of autopsied people. So tuff!

The world is a very dark place.