Describe the origin of the band.

DARRYL KLASSEN: Joel and I crossed paths a few times starting maybe six years ago, since his wife Elsie and I worked together. He played in a guitar jazz duo which I admired a lot. I played in a different trio which we had Joel join a time or two. It became apparent pretty quickly that it wasn’t a good fit. Not long after that we got together on our own and it clicked. I first heard Joe playing with the Mennonite Jazz Committee. I loved his playing and thought, why not take a long shot and ask if he’d be interested in playing with us.

JOE WORST: I got a phone call one day from Darryl asking if I wanted to play with a couple of guys who wrote all their own music. Up to that point I’d always played with people who played covers, so this sounded like a refreshing change.

Where did you get the name J.D. Miner?

JOEL KLINGLER: We brainstormed it. ?J? stands for Joel and ?D? for Darryl. ?Miner? just sort of happened; we’re all digging for something, right?

What do all three of you have in common?

DARRYL KLASSEN: We all love playing music, and we like each other as human beings . . . at least, I like them guys . . .

JOE WORST: I admire how Joel and Darryl continually come up with new tunes and they’re not at all like the so-called new songs that we hear on commercial and even non-commercial radio. J.D. Miner’s music is written and played with a new and free perspective That’s uniquely Canadian.

JOEL KLINGLER: And we all like finely crafted acoustic instruments. 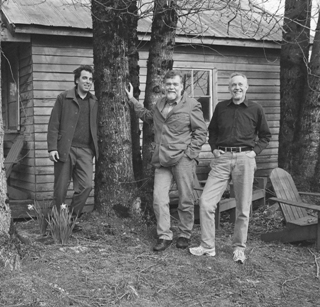 Tell me about your childhoods.

DARRYL KLASSEN: I grew up in Canada, the U.S., Germany, and Switzerland. My dad is a missionary, and is still, at 89, travelling and going strong. I attended 13 different schools from kindergarten to grade 12, in four different countries.

JOE WORST: I was born in Holland, started elementary school in New Guinea, continued school back in Holland, then completed school in Vancouver from grade five on. I started playing electric bass in high school because my brother Eduard had started a band and needed a bass player. I had a misspent youth playing electric bass in every conceivable situation until I could afford my first double bass. I’ve loved and played both instruments for many years now, and studied with some great teachers on both instruments. I studied music formally in college.

JOEL KLINGLER: I’m Swiss and Scottish. I spent my childhood in a small Swiss village and outside of Dawson Creek, B.C. Wherever I spent my childhood I played and played, particularly with Lego. I was profoundly influenced by the music on the school bus radio on my long ride to school and by my elementary school music teacher, Mrs. Whitbread.

Do you have any nationalist sentiment for any country you’ve resided in?

DARRYL KLASSEN: Oh, I’m Canadian, for sure. I think It’s the best country in the world. I just watched the Juniors today, and Canada won the gold. There are other Northern European countries I like but I like Canada the best. I like the people. My parents are from the prairies and I love being in the prairies. I was born in the States but both my parents are Canadian so I have dual citizenship. I tried to renounce my American citizenship in the middle of Vietnam, when I was eligible for the draft. They actually sent me a card but I didn’t even go for my medical.

JOEL KLINGLER: I have feelings for my village in Switzerland. I’m definitely loyal to Canada. I think what I’m excited about most is who we are choosing to become. I think we’re going to start seeing a trend where people are going to start raising their voices more. Like with this Taser thing?there was a huge public outcry. With Tasers It’s like they think there are no creative options.

What music have you been listening to this week, besides your own?

What, for you, are the right conditions for artistic creation?

DARRYL KLASSEN: Artistic creation is sort of funny. Sometimes it happens, sometimes it doesn’t. I can’t understand how professional writers do it. Mostly I feel like I discover songs in an instrument. They are just there, waiting to be found.

JOE WORST: Artistic creation for me is somewhat more technical than it is for Darryl and Joel, I think; they are the songwriters. For me artistic expression is practicing and learning my instrument, working towards improving my ?voice? and my musical vocabulary.

JOEL KLINGLER: The right condition is realizing that there are no right conditions. Much creativity comes out of oppression and finding the voice to express yourself.

DARRYL KLASSEN: I’ve always reacted strongly to the view that the arts are compelled somehow to convey a message. We don’t expect carpenters to build only hospitals or churches, or mechanics to fix only school buses or ambulances. A song, a poem, or a painting stands on its own and should be judged accordingly. Music either speaks to me or it doesn’t. I am sometimes moved to tears by the beauty of a melodic line. Authentic songs originate somehow in one’s own experience.

JOE WORST: We all have social concerns of course, but our thoughts are more reflected by the lyrics of the pieces than by the harmony we choose to use to carry the message. I like and appreciate how Joel and Darryl’s lyrics represent the feelings of each us as individuals. The listener can also identify with J.D. Miner’s music because it is all of us, from Canada, coast to coast to coast. The music contains our feelings about each other and our reactions to events and people in the world around us.

Next week, the Mindful Bard will wrap up part 2 of the J.D. Miner interview