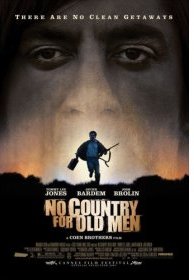 No Country for Old Men

Beautiful location, great acting from a cast that couldn’t have been chosen better, brilliant dialogue, and loads of rootin? tootin? shoot-em-up barn-burnin? cowboy-style blood-and-guts action?but when the credits rolled, I felt like a kid getting to the dentist when he thought he was going to Disneyland.

I loved this movie, but it would have been better if it had an ending.

Horror films from Australia and New Zealand are notoriously gory, campy, and self-aware. Peter Jackson is of course the first name that comes to mind, with opuses like Dead Alive and Bad Taste, and the Spierig brothers? brilliant tribute Undead was a pileup on the genre freeway, paying homage to sci-fi, zombie, spaghetti western, and action.

A blackface minstrel variety show set in the watermelon patch of a Southern plantation. This is the funniest movie ever made.

Directed by: Chris Weitz (based on the book by Philip Pullman)
Starring: Nicole Kidman

Although the plot isn’t really original’see Neverending Story, Black Cauldron, Labyrinth, Pan?s Labyrinth, Dark Crystal ?Compass was still a pleasure to see. The evil empire is genuinely scary, the effects are spectacular, and the Marlboro Man is in it. Oh yeah, and armoured bears are worth at least a hundred million points.

While the idea of having animal spirits that follow people and help them seems a little familiar, and I’m still not sure I agree with encouraging kids to use magical dust to fly to other dimensions, The Golden Compass remains a visually stunning and entertaining film.

Directed by: Peter Joseph
Starring: some planes and buildings

The first five minutes of ?the spirit of the age? is a Baraka-like slide show of images, only sped up and focusing pretty exclusively on war. It terrified me completely. After the director binges on human suffering, the film is divided into three main portions: the first discusses the origins of the Christian faith; the next handles the fabricated government version of 9-11 because It’s some kind of modern documentary prerequisite; and the last covers what all of this means to us right here and now, like the North American Union, international banking cartels, historical world war precedents, government-monitored tracking chips embedded in our souls, etc.

The movie is highly interesting and informative, if a bit zealous in the last bit, but I’d still recommend watching all the way through. At least Michael Moore isn’t in it.

While it is tempting to call this a horror movie, It’s really very much a comedy that uses horror for a format, much like Abbott and Costello’s ?Who’s On First? uses baseball?not mocking it, but using it to make another point entirely. This movie is well thought out, truly funny, wickedly gory, and goes really well with Neapolitan ice cream and those little wafer cookies.

Directed by: Michael Davis
Starring: Clive Owen and a baby

Clive Owen is a man to be reckoned with. Anyone who can keep a straight face while cutting an umbilical cord with a handgun is either a sociopath or a damn good actor. This movie is non-stop action, and I’m not Roger Ebert so I don’t have to say that every time an action movie gets made. I mean, there’s literally nothing but gunplay and wild stunts from start to finish, and though the plot is mainly irrelevant, the cinematography and effects make it well worth watching.

Mirror, Mirror ? Basically, a Winona-Ryder-circa-Beetlejuice look-alike moves to a new town, finds a haunted mirror, and starts pulling Carrie-esque stunts on her classmates, brutally?and psychokinetically?murdering anyone that makes fun of her for wearing huge sombreros and 16 tons of white makeup. Lots of blood and even an awesome sink-mounted garbage disposal amputation performed on Stifler’s mom from American Pie.

Mirror, Mirror 2: Raven Dance ? I assume It’s called Raven Dance because once in a while they show stock footage of a raven sitting on a mirror. In one scene a guy pretending to be a doctor pays a hillbilly to scare a girl by stealing her underwear. Oh yeah, there’s a cat named Pie-Whack-It and no blood in the whole damned thing.

Mirror, Mirror 3: The Voyeur ? Finally, Billy Drago (Tremors 4, Sci-Fighters, Cyborg 2, LunarCop, Soccer Dog: The Movie, The Untouchables) showed up! Oh no, he’s trapped in a poorly lit, gauzy dry-hump love triangle with a girl and a mirror that grants wishes. I wish this was a better movie.

Mirror, Mirror 4: Reflections ? By the time they realized it would be clever to include a mirror-related pun in the titles of these movies, it was too late to turn back to the horror format. This film was exclusively released in this box set. Billy Drago sends his apologies to all the fans clamouring for more of his pasty flesh. Gotta buy the four-pack, suckers!