Features
The Voice
Editorial – One Step At a Time

It’s a funny thing about perspective: a little bit can go a long way. Last week, I was struggling with a particularly difficult assignment. It was a critical review of the work of two communication theorists. Interesting stuff (well, okay, maybe not that interesting), but it felt like climbing Everest. After two weeks of wrestling this essay to the ground, I had resigned myself to the fact that the only way to get to the finish line was going to be one slow, dogged word at a time.

I got there, and just as I started dreading the next essay (double the word length) a little bit of perspective landed at our door. Spending the winter on a fly-in northern First Nations reserve, visitors are few and far between. So when I heard a knock and saw an RCMP officer at our door, my thought was that she was searching for someone whodunnits’d gone missing in these minus 44 C temperatures (and That’s before the wind chill).

Instead, she smiled and introduced the slim, bearded man standing beside her. His name was Fabien Docet, and they were looking for someone who could converse in his native French. He had just arrived in northern Saskatchewan from Whitehorse in the Yukon?on foot.

Fabien is from Anjou in the south-east of France and, as he explained as he warmed up in our living room over coffee, he wants to see the Canadian wilderness firsthand before it disappears. He is walking, pulling a sled of supplies and sleeping in a tent. He began his trek in July in Skagway, Alaska, and his route crosses Fort Simpson, NWT; Churchill, Manitoba; northern Ontario; and eventually Quebec, where he will end his journey. It is a total of over 6,600 kilometres, and his only companions are a trio of dogs. As his website says, his goal is to make it ?from the Pacific Ocean to the Atlantic Ocean, by foot, alone and without assistance, across the Great Canadian North, in less than 300 days.?

He has encountered grizzlies, wolves, caribou, and -50 C temperatures, but his biggest concern the day we met was making it to Churchill in time. To succeed in his goal of travelling only by foot power, he needs to get to the pass before early signs of spring make the ice too risky to cross.

That evening, I tried to imagine what it might be like to spend the night in a tiny tent on a frozen lake, the wind gusting and ice booming, or to walk for days on end without exchanging a single word with another person. And it occurred to me that the way we approach our goals is really nothing more than a matter of perspective. To some, the challenges seem too daunting and they never even begin. There is always an excuse, always a reason why not. They look at the road ahead and think only that the finish line isn’t yet in sight; they don’t see the solid road underfoot That’s waiting for their first steps. To others, there is simply the fun (and challenge) of the attempt. Whether they succeed or not isn’t the point?they know there’s always something gained in the trying.

The next morning, we watched from the warmth of our living room as Fabien set out for the next leg of his journey. In the bitter cold, he dug a set of ski poles into the snow and began to walk. After a few steps, he stopped, untangled one of the dog’s harnesses, then started again. It took three more starts and stops, but eventually the small caravan was underway and we watched as Fabien, his dogs, and his sled got to the top of a rise and disappeared.

Our encounter was a wonderful surprise, and we’ll be following Fabien’s progress on his site. And as I return to my own goals, both big and small, I’ll remind myself of the day we had an unexpected visitor?and concentrate on getting there one step at a time. 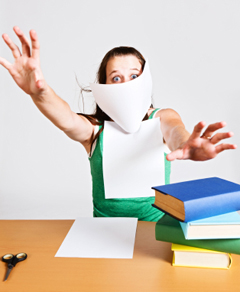