On the New CD, A Maze in Greys

I got the name for this CD after listening to some politicians. It occurred to me that the world we’re building is lacking in black and white truth. It’s always ?a maze in greys.? At some point I realized that That’s the exact opposite of ?Amazing Grace.?

There are three songs on this CD that are related: ?Billy Said,? ?Time Will Get You Money,? and ?Rusty Pail Blues.? I started writing ?Billy Said? and I immediately said to myself, ?This sounds too much like Bob Dylan.? Now, every once in a while this happens, and I usually abandon the song. But this time I said, ?Hey, there’s no actual law against it. I’ve avoided it up to this point, but I’ve wanted to do it so I’m gonna go for it.? So I wrote ?Billy Said? and that opened the floodgates. ?Time Will Get You Money? just popped up.

As for ?Rusty Pail Blues,? over the years I’ve collected little bits and pieces from this song and that. I call it my spare-parts department. At my cabin I have two pails. One’s rusty and the other has a hole in it. For a joke I said I should take these two pails and make one good pail out of them. So then I got the idea of milk and honey in a rusted pail. It’s almost Biblical, eh?

?Plum? started in 1989 and finished just before I recorded it last January. The problem with it was, there are two areas I have trouble writing songs in. The first is rock and roll. The other area is nonsense. ?Plum? started out as nonsense, and I loved that, and I tried going with it. The more I wrote it the more adventurous it made me, which really frustrated me. [Correction: The more I wrote it the more sense it made, which really frustrated me.] I have a whole three-ring binder notebook full of notes for ?Plum.? Finally I just gave up and went with the sense-making.

This CD is my most preachy, with ?Rusty Pail Blues? and ?Time Will Get You Money.? Sometimes I’m not even in the mood to sing them to an audience because I feel like I’m preaching too much. Those two songs, and ?What an Idiot He Is? from way back, are as preachy as I’ve allowed myself to get.

I was never a music listener, and am still not to this day. If It’s new I don’t want to hear it and if I already heard it, I already heard it. Having said that, there are tons of artists I love and tons of individual songs I love. I like dancing to electric blues and good old rock and roll. I had an old Jimmy Reed album that I loved, and I loved Jimi Hendrix, Bob Dylan, the Beatles, the Rolling Stones . . . I also enjoyed the early folk craze, like when Dylan first came out. Everything I’m talking about is 1970 and before. Since then I’ve hardly listened to anything.

When I’m playing a gig sometimes somebody will crash me rather than me having to take a hotel room. When we get to their place they’ll say, ?Okay, what kind of music do you want to listen to?? And I’ll say, ?Well, actually I’m not a big music fan,? and they’ll say, ?Okay, I have a CD for people who hate music,? and they’ll put on their favourite CD. This happens time and again. That’s why I like hotel rooms.

Gail, my other half here, she likes plays, so every once in a while we go to a play. But you know the old expression ?The theatre’s been dying for five hundred years?? That’s how I feel about plays. I give them all the credit in the world because they keep trying, but they take themselves so seriously that I can’t suspend my disbelief. 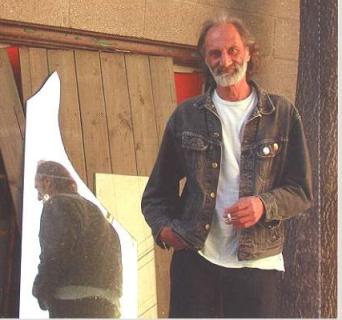 Movies for me have to be pure escapism. I like things blowing up. It’s such a typical guy thing. I’m a bit of a Bohemian fringe character, so I love it when I can do something that every guy does. I like action, I like car chases. I want to be sitting there eating popcorn when everybody else is up to their necks in trouble.

I like books like The Life of the Bee. I like the fact that somebody can spend 30 years researching a subject and I can sit there for a week and glean all the results. The Art of War by Sun Tzu is the same thing. I also read a lot of detective stories, adventure, escape, and some good novels. The Grapes of Wrath is a great novel, one I think should be taught in high school. I just discovered Emile Zola. He’s like a French Dickens. I really enjoy getting that look into another world. He’s a master. And of course the usual Russian suspects?Dostoevsky and Tolstoy, and just odd books from here and there. Everywhere I go in Canada to play music I haunt used book stores.

As far as conversations, I feel me and my friends talked everything out before 1970. In the last ten years I’ve sort of been in the mood again to talk to people but my girlfriend’s the only volunteer I have and She’s not always a willing volunteer. Musicians are great to talk to, too. A lot of artists who are poets and dancers and actors and painters?they’re so intense, but musicians are laid back. I like artists, but I don’t necessarily feel like discussing their art all the time, which is what a lot of them want to do.

I want to reach the person whose views are the most diametrically opposed to my own. To succeed at that you’ve got to be real sneaky. I want to entertain these people. I think That’s my job in life because I used to be the class clown until about grade seven when I had it kicked out of me (my academics weren’t such that I could afford to be class clown anymore and I was strongly discouraged from doing it). But when I started writing songs I got to be class clown again, and that was all I ever wanted out of life.

My artistic activity keeps me from exploding with frustration at the social situation. People are so trusting and they get screwed over again and again because other people play to their weaknesses and their fears and they fall for it every time. It just drives me nuts.

I like Eastern thought. The more I read it and the older I get the more sane it sounds, the more literally true.

To me everything we’ve done is built on a false premise. My only political view is that with both capitalism and communism the result is that the most rapacious elements claw their way to the top, period. And yet everybody’s worried??Oh , communism!? or ?Oh capitalism!? I think we ultimately have to put the material world in its true perspective, which means look both ways before you cross the street. You’ve got to be aware, you can’t be swayed by every fad.

Evil is the conscious desire to do bad things. Wickedness is: I want this, and I can rationalize myself enough to get it by doing these things which look bad but aren’t because they’re the means to my end. The devil wouldn’t bother with rationalizing. He’d say, ?This is evil; I’m gonna do it.? But even Hitler thought he was doing good. It’s madness, not consciousness. There’s no good and bad; there’s only conscious and mad.

The Bard could use some help scouting out new material. If you discover any books, compact disks, or movies which came out in the last twelve months and which you think fit the Bard’s criteria, please drop a line to bard@voicemagazine.org. For a list of criteria, go to http://www.mindfulbard.blogspot.com. If I agree with your recommendation, I’ll thank you online.