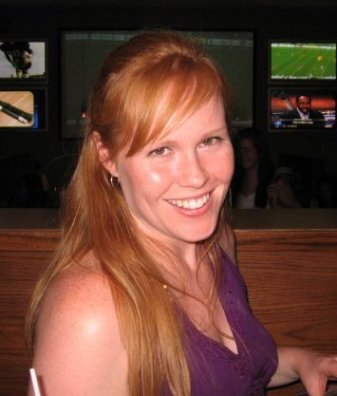 This week’s profile focuses on a student who’s studying for two degrees at once, but still gets the job done.

Amanda Evans, who lives in Hamilton, Ontario, is enroled both as a distance student in Athabasca University’s Bachelor of Science in Human Science (BScHS) program, and as a traditional student at Mohawk College’s Pharmacy Technician program.

This arrangement allows her to easily compare distance education and traditional classroom-based learning. She also explains how AU’s articulation agreements and post-diploma program will allow her to obtain a bachelor’s degree twice as fast as usual.

Amanda is in her first year of AU’s BScHS; at the same time, she is partway through Mohawk College’s Pharmacy Technician program. She began this unique arrangement when she learned about AU’s articulation agreement with Mohawk College.

Articulation agreements allow students to transfer credits between college and university programs; through this agreement, Amanda will be able to earn credit for the entire Pharmacy Technician diploma, and apply that toward a bachelor’s degree through AU’s post-diploma program. To finish more quickly, She’s studying in both programs at once.

?By the time I’m done the pharm tech and can apply it to the BSc, I’ll be almost done [the BSc],? Amanda says.

The more she learns, the more she wants to learn; when she graduates with her BSc, Amanda is planning to attend medical school. ?After working as a tech, and learning so much about the body and medicine, I . . . wanted to learn more,? Amanda says.

She’s particularly interested in McMaster University in Hamilton, Ontario, which has a three-year, problem-based curriculum. And not only is the hands-on approach appealing, It’s also close to home, although, Amanda says, she’ll go ?almost . . . anywhere.?

Because she is attending traditional classes at Mohawk concurrently with distance classes through AU, Amanda has first-hand experience with the advantages of distance education?as well as methods to overcome the challenges of learning from a distance. Initially, she was drawn to AU because of her non-traditional age.

Once she began classes, however, she soon discovered other advantages of distance learning. For example, Amanda enjoys working on her own, and AU’s flexibility makes that even easier.

?I have to actually make the time to go to . . . traditional classes,? she says. ?[But] I can do the AU courses anywhere, and anytime.?

Another advantage is the ability to work while obtaining her degree. ?[I can] pay for the courses as I [go], which means no student loans!? says Amanda.

Like many distance students, however, Amanda sometimes finds it difficult to motivate herself.

?I’m a procrastinator,? she says. ?A schedule doesn’t really work for me . . . I find it hard to stick to unless I just go and do it.?

What does work is removing as many distractions as possible. ?If I’m at home, I’ll want to just have a quick nap, or end up finding other things to do,? Amanda says. Instead, to avoid the distractions at home, she studies at the Mohawk College library. ?Because I have night classes at Mohawk on Tuesday and Thursday, I try to make those my ?school days?,? she says. ?I head there for the day to work on my coursework.?

Although she also misses the socialization and in-class discussions found at traditional universities, she feels that she is able to obtain that support through her Mohawk courses. And She’s found a supportive network of other AU students through the AU Health Sciences Society, a new student group that she helped launch.

?It’s a group for all BScHS students, or AU students interested in health sciences,? says Amanda, who is president of the society. The group hosts a forum where students can discuss ?current topics, health news, debates, ethics, [and] what to do with your degree,? she notes.

While the ability to discuss current issues with classmates can keep studies relevant, It’s also a great support network for students who might feel bogged down. ?we’re always open to helping each other,? Amanda says.