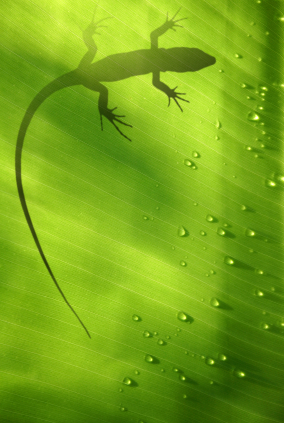 New Caledonia’s crested gecko is one of the most versatile animals in the world. He not only has the ability to change his colour at will for camouflage, but a combination of a prehensile tail; feet adapted to running quietly along the forest floor as well as gripping branches and sticking to tree bark; night and day vision; and the ability to hunt and survive off a variety of insects, rodents, reptiles, and fish.

Although he is best kept alone, he is a very playful animal that is very active at night. He likes room temperature, but when he sleeps during the day It’s best to have a regular household lamp on him to give the simulation of the day-night cycle and the warmth of the sun.

He will hunt mostly at night, and should be fed every other day just before bedtime. While young crested geckos are active enough to catch small crickets, the two-year-old male and gravid female should be fed either powdered substitute or waxworms. Of course, crested geckos should be fed according to their weight and rotundity and must have fresh water daily.

A bedding of mulch and/or moss with fallen leaves is important, and loose upright branches are a great jungle gym to watch your gecko play on under a red light bulb. Daily misting helps to maintain the moisture he needs to absorb through his skin, and the moss will especially help that. Ensure he has a clean cage with a tight-fitting lid?geckos are very slippery and can hide just about anywhere. Imagine chasing your gecko up the walls or under the stove!

He can be handled, though take care not to let him jump, and cleanliness is important. Too much noise and attention will make him anti-social and he will very likely refuse food and become unhealthy. Also, do not be alarmed if his tail falls off, as he has evolved the ability to drop this at will when threatened by a predator, and it will grow back eventually.

Anyway, if That’s too much work I guess you could just watch TV.

The Agenda with Steve Paikin

Steve Paikin is driven by vengeance. You can just tell when you watch him, there’s a fury in that man to do battle. Though he may seem complacent at first glance, his tactical skill in the arena of argument is a sight to see, and he makes a point of choosing excellent combatants. This is basically a cockfight and Steve Paikin has the biggest wattle.

As much as one can say about the aid that telethons and Christian missions have garnered for communities and villages in Africa, children there do not need your care sweaters, especially since they are wool. If as much was spent on helping local people start businesses and obtain medical supplies as this channel spends on wardrobe and airtime, we wouldn’t need shows like this that thinly disguise pleas for cash with moral uprightness and chatty ladies on couches.

Imagine sending David Suzuki back in time 200 million years and getting him to do The Nature of Things about dinosaurs and cavemen. This is the coolest show ever, until Nigel Marven shows up and starts lassoing computer-generated prehistoric trilobites. Sorry Nige, but you are not Steve Irwin or Paul Hogan.

This is your standard kids? marathon programming with mascots and cartoons and lessons to learn and I am a child and I love these shows: Sesame Street, Polka Dot Door, The Friendly Giant, Today’s Special, Hilarious House of Frightenstein, Telefrancais, The Elephant Show, etc. I’m either happy I stayed up long enough to catch Sagwa: The Chinese Siamese Cat, or really angry that I had to get up so early but glad It’s on anyway.

The Whitest Kids U? Know

Following a long line of hit sketch comedy shows into a newer, faster, and more demanding age is difficult, and even Monty Python and The Kids in the Hall had their low moments. While some of the material here is pretty poorly written, there are definitely scenes that compare with the best even Mr. Show had to offer.

Dexter is a serial killer who works for the police like the rest of his family, and only murders other killers. The idea of a methodical stalker carrying out righteous, ritualistic murders puts a new slant on justice, and the fact that he’s working with the police and his sister to try and capture himself makes for some great storylines. Definitely not for the squeamish.

The Super Bowl allows the outside observer to get a very clear look at the nature of America’s gluttony. Also, FOOTBALLLLLLLLLLLL!

Once upon a time somebody said ?Thou shalt not lie? (or something like that), and That’s pretty much what this show is about. The famous magician-comedians Penn and Teller use their powers for good, uncovering all the seedy little lies we’ve been hearing about for years, like life coaches and John Edwards and circumcision and endangered species lists. The language is pretty raw, but That’s because It’s slanderous (and thus illegal) to call someone a fraud, but not to expose their lies and call them an asshole.