If you’ve ever been blessed with access to a good library and the freedom to choose your next tome based on names mentioned in whatever book is setting you on fire at the moment, you will have experienced the thrill of trekking new territory with a map you are drawing as you go along. An added benefit is that the themes and arguments you discover will probably stick in your head for a lifetime.

This is how I suggest you read Cultural Amnesia. Open it to the luminary about whom you happen to be the most curious, read the essay, look up the names of those who appear in that essay, check to see if James has done a write-up on any of them, and just keep going.

Cultural Amnesia is a highly personalized set of reflections on the heroes and villains who helped shape the 20th century and the saints who pointed the way out of the miasma. It is probably more insightful and informative than most survey courses on 20th-century culture, and certainly more pleasant reading. Many of the ideas in this book are based on the marginalia of one of the most unbelievably well-read humans (unless he’s faking it, he’s one of those rare birds who not only reads quickly but processes deeply) alive today. 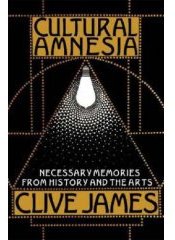 James is an apologist for humanism and liberal democracy. don’t look here for biographies; the notables are not so much summarized as used as touchstones for James’s digressions into the causes and repercussions of modern events.

In his discussion of Hitler, for example, he claims that nationalist anti-Semitism constitutes a dangerous trend for any society, a trend which knows itself threatened by liberalism (hence the violence of attacks on liberal thought during dictatorships). Totalitarian regimes begin by selling a culture’s soul straight off the bat. James implies that a liberal state, by contrast, has the potential to harbour the full spectrum of human evil without selling its own soul.

His defence is as flawed as the thing he defends. He comes dangerously close to excusing Chesterton’s anti-Semitism on the grounds that Chesterton supported liberal democracy and would never have stooped to a compromise with fascism. But this just illustrates the point; the kind of political order James lauds is one in which human ignorance and vice can be accommodated without destroying the order itself, much in the way that James’s occasional bouts of intellectual self-indulgence do not seriously detract from the relevance of his argument.

Some of what is written here galls; it goes against what intellectuals have been chirping to each other like whippoorwills for years by way of establishing commonality, most of the chirping having to do with the decadence of western culture.

But is liberalism really so great? Let’s leave death camp casualties out of the equation for a moment and recount a few of liberal democracy’s historical problems: racism, inadequate medical care for the poor, oppression of women long after even the pretence of defensibility has died, cover-ups aimed at protecting institutions to the detriment of those they are pledged to serve, destruction of the natural environment, an ever-growing wealth gap . . . Yet every one of these things has been a feature of totalitarian regimes. As have death camps.

Is Cultural Amnesia a wake-up call or the swan song of a dying civilization? James himself leaves it wide open. One problem with the modern world may be that even if liberal democracy is the best kind of political order we have come up with so far it is simply not enough.

Perhaps this condition of not being enough is dangerous. If liberal democracy had come closer to fulfilling the longings it engendered and nurtured in the hearts of human beings then it might never have spawned the profound discontent that formed the medium for explosions of tyranny. Perhaps James intends for us to consider the examples set by people like Heda Margolius Kovaly and Louis Armstrong as a means of strengthening the liberal tradition by bringing it closer to its own ideals.

Cultural Amnesia lives up to seven of the Mindful Bard’s criteria for books well worth reading: 1) It is authentic, original, and delightful; 2) it confronts existing injustice; 3) it makes me want to be a better artist; 4) it gives me tools which help me be a better artist; 5) it renews my enthusiasm for positive social action; 6) it displays an engagement with and a compassionate response to suffering; and 7) it harmoniously unites art with social action, saving me from both the ivory tower and slavery to someone else’s political agenda.

Mindful Bard – The Unbearable Beauty of the Open, Hurting Heart