?. . . what in motion pictures can change the world more than Astaire and Rogers dancing??

In the beginning were the Movies. Then, in a mighty whirlwind, came a God who kills children because he hates innocence. Those who believe in the Movies hate this God and try to atone for his wrongs, laying down their lives, as soldiers of the Movies, to triumph in the quest for truth and innocence and the protection of children.

So goes the heilsgeschicte of Vikar Jerome, who turns his back on divinity school and a nutbar Calvinist dad to come to Hollywood. Like a classical scholar visiting the ancient ruins of Greece, he becomes an apostle of the Movies, seeking deeper knowledge while spreading the word to all who stumble across his path.

His devotion is conspicuous; tattooed on his shaved head are the almost kissing faces of Elizabeth Taylor and Montgomery Clift in a scene from A Place in the Sun. In his quest Vikar works his way up from a video store clerk to an award-winning editor. Not far into the story Vikar reveals himself as a kind of avenging angel of the one true God (whoever that might be), hell-bent on attacking ignorance and oppression.

A mildly autistic savant, Vikar repeats certain phrases like mantras, finding any excuse to wedge them into a conversation (e.g., ?I believe it is a very good movie,? ?Fuck continuity,? and ?All time is in the movie and the movie is in all time?). 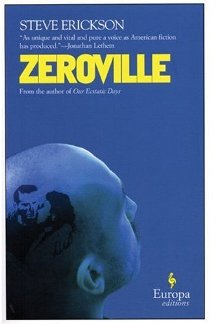 Vikar sits soberly through comedies, believing them serious drama, and he laughs all the way through The Exorcist while the other audience members are writhing in their seats. He occasionally meets oddballs who have very discerning things to say about film; he later quotes their monologues verbatim, and comes across as an eccentric genius.

Vikar slowly works out his salvation, drawing ever nearer to his true self. In a scene in a punk bar he becomes ?the general of an army leading the children in a revolt against gods and fathers.? He visits this punk bar, and many others, because this is the first music that has grabbed him in his soul, this music for sons who hate their fathers.

Deep within the Movies and Vikar’s dreams there is buried a secret movie about a girl who lies on a stone and awaits murder by her father in sacrifice to the child-hating God. On the stone is inscribed an ancient Hebrew phrase. Beneath the inscription is a chasm emitting industrial noise.

Time gets set to zero the day Vikar receives a shipment of movie reels as partial payment for agreeing to edit a film. (Starting here the brief numbered chapters hit 227 and then count down.) This is the day his quest begins in earnest. It is the day of departure from a universe presided over by a mad God.

Vikar suggests that the Movies are the new cultural canon, replacing the arts. Literature is now the Movies? handmaiden, worthy only in its film potential. Which raises the question: What about Zeroville?

I believe it would be a very good movie.

Zeroville lives up to four of the Mindful Bard’s criteria for books well worth reading: 1) it is authentic, original, and delightful; 2) it confronts and mocks existing injustices; 3) it displays an engagement with, and a compassionate response to, suffering; and 4) it tells of an attainment of the true self.