In June, AU’s Florene Ypma (a course materials editor at AU Central) will join over 200 other cyclists as they cycle across country to battle poverty.

The goal is to raise $1.5 million to help aid the world’s poor. The group’s nine-week tour will begin June 28 in Seattle, Washington, and end in Jersey City, N.J. on August 30.

In all, the Sea to Sea 2008 Bike Tour will cover more than 2,500 kilometres, and Ypma will be taking part in the first leg of the route.

?I would love to ride the entire distance,? she told AU’s The Insider. ?For several years, it has been a dream of mine to ride across the continent. Even this shorter distance is a tremendous opportunity to ride for a very good cause with a great group of people.?

Along with raising funds, the group’s goal is to raise awareness of poverty-related issues and to show others that there are countless ways to make a difference.

?There are many ways to get involved in fighting poverty worldwide,? Ypma added. ?Locally, we have people involved in Canadian Foodgrains Bank projects, and many people who sponsor disadvantaged children through organizations such as Compassion Canada. This tour is another outlet for poverty relief efforts.? 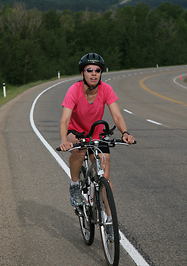 To find out more about the tour, visit the Sea to Sea website here.

The Future of AUSU is Bright!