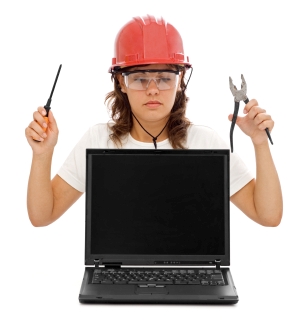 EDMONTON (CUP) — A national shortage of computer science graduates has the industry scrambling to find employees, but fewer and fewer women are taking part in those programs.

Today, only half as many women as in the 1970s are completing computer science degrees, and academics are trying to figure out why.

?Twenty years ago, more like 30 to 40 per cent [of students] were women,? said Gail Powley, vice-chair of the University of Alberta Women in Scholarship Engineering, Science and Technology (WISEST).

Today, she said, those numbers have been cut in half, noting that nationally, computer science programs reflect the starkest contrasts in gender parity.

According to the University of Alberta’s Department of Computing Science, during the 2007-2008 academic year, only 37 out of 247 undergraduate students were female.

According to Eleni Stroulia, a professor of computer science, two correlated phenomena are currently happening in North America.

?So in a gender-neutral discussion, the numbers are dropping,? Stroulia said. ?[But, secondly,] the numbers of females are dropping even faster. So we have fewer students, and the gender gap is widening.?

The growing gender imparity is unfortunate, according to Stroulia, because ?you need a multi-perspective team to make good decisions,? adding that as women leave the IT industry, the field becomes ?more and more uniform.?

Nobody knows exactly why computer science programs are failing to attract more women, she said, but ability isn’t an issue.

One of the possible reasons being put forth, Stroulia said, is that IT is perceived as a geeky subject with little social interaction.

The problem, she explained, is that women are thought to want to have an impact in society, and are deterred from the idea of sitting in front of a computer all day.

Stroulia stressed that, despite that perception, there are ?plenty of opportunities? to combine other interests with computing science.

?We do meet with people, and work in teams, and talk with people. we’re not sitting in front of a computer all the time, hiding from the world,? Stroulia said.

Programs such as the Canadian Information Processing Society have sponsored Women in IT Day, which aims to engaging young female students in IT-related activities to communicate what a career in the industry might look like.

Indeed, Stroulia said that ?in some cases it seems that this does not even enter the choices of women, so they haven’t seen anybody that would emulate or illustrate this career for us.”

Stroulia also said that having more women involved in technology featured in media could also help to promote women’s involvement.

She noted that criminology programs saw great boosts when the CSI series became popular and the same tactic could be explored in this situation.

?Media has been recognized as one of the key problematic issues, where people who join IT aren’t thought of as being fashionable or friendly or anything,” Powley said.

Powley explained that the idea of having scientists-in-residence has been floating around as another way to allow students to come into contact with role models in the industry.

?These individuals would be young, dynamic professionals working in local companies so that young people can see that these people are cool, they’re fun, and there are jobs,? Powley said.

That jobs are being outsourced to India and Asian countries is another concern that discourages potential students, she said. She stressed, however, that while some jobs are leaving Canada, there is a large domestic shortage of IT graduates.

Powley, a chemical engineer, said that there are immense career benefits to focusing on computers, no matter what field a student enters.

?I focused on an area of chemical engineering that was very computer-intensive and it did me extremely well throughout my career. In fact, I got one of the highest-paying roles in chemical engineering. So for people who have an interest in biology, there’s a computer side to biology they can look at.?

“Really It’s a wonderful profession,” Powley said. “It’s high-tech, It’s current, you have the latest and greatest in toys, if you will, [and] there’s a very dynamic environment.?