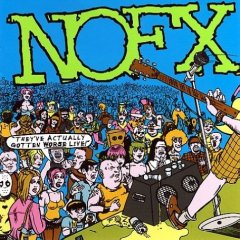 Enter NOFX with the latest live recording: They’ve Actually Gotten Worse Live, and you’ve got all the usual Fat Mike, El Hefe, and Eric Melvin dialogue mixed with musical improvisation, audience participation and, best of all, none of the songs from I Heard They Suck Live!

The band’s own description of the record, posted on Fat Mike’s own Fat Wreck Chords website, is ?in January 2007, NOFX booked three nights of talking mixed with the occasional song at Slim’s in San Francisco and recorded a live record.? Ever so humble.

Despite the fact that NOFX is admittedly a little shitty live?and I use the term ?shitty? in the most loving and adoring of ways?It’s this live ambience that draws in the crowds and makes NOFX live records some of the best out there. The band members are always drunk, always making references to each other’s drug abuse and to the fact that they keep messing up their own songs and will have to ?play it again tomorrow.? The crowd really gets involved, never afraid to cheer, boo, or just be generally disruptive to the whole recording process.

NOFX is one of those bands that has really been able to capitalize on its live performances to the extent that, not only do fans flock into the shows, but they look forward to live albums almost as much as the regular studio albums. They’ve Actually Gotten Worse Live is a perfect, if long overdue, follow-up to 1995’s I Heard They Suck Live; both records are perfect encapsulations of a NOFX show, and given the California club recordings they also represent those great cozy local shows that most of us can never see.

This three-day recording covers some of the best-loved NOFX fan favourites as well as the newer hits from The War on Errorism and Wolves in Wolves? Clothing.?Green Corn,? ?The Longest Line,? and ?What’s the Matter with Parents Today?? mesh perfectly with ?Franco Un-American? and ?We March to the Beat of Indifferent Drum,? bringing together the past and present of NOFX’s music in terms of punk-rock anarchy and modern political commentary.

For NOFX fans, this is going to be an irreplaceable part of the CD collection. And non-NOFX fans?You’re just missing out, and It’s a shame. Get in on the chaos!