Columns
The Voice
The Mindful Bard – Rick Mercer, The Book

?Raven, who had concealed himself among them and heard the council’s plans . . . went to the old woman and told her that the girl wanted her to return the beak to him. Suspecting nothing, the old woman gave him his beak. He put it on and flew away, cawing with pleasure at his success.?

The title of Canada’s Trickster Laureate should be established, if only for Rick Mercer, even though the man clearly despises titles. He is Raven, Loki, Inktomi, Wenebojo, Coyote, and Hermes all rolled into one gutsy Newf. Just when you think You’re buds for life he catches you doing something stupid, underhanded, or just plain evil and there he is cawing away about it on public television or tripping you up and making you look dotty. This guy has the gall to meet with any high mucky muck you can name, make nice, have some laughs, then publicly rip the poor bugger apart branch from twig.

Of all the tricksters of world mythology Raven is probably the most apt comparison, and not just because Raven emerged in what is now Canadian territory. You can often find Mercer circling, circling, circling in search of tokens of Canadian identity so he can steal them and add them to his trove. Much of his ranting includes some speculation on what Canada, or a Canadian, is or is not. And whatever you believe about generalizations, you have to admit they’re fun. And fun is good, as the trickster Dr. Seuss assures us.

The Book is a thoroughly fun selection of Rick’s Mercer Report rants and various of his other scribblings from the last four years. To judge this book is to judge Mercer’s career as a political satirist in a country where political satire is the comedy of choice.

We can’t give Mercer all the credit for the success of said career. There is something phenomenal about a country that embraces this kind of humour. Not even the world’s most sanctimonious democracy can compete on this level. Can you imagine Jon Stewart having a sleepover at the White House? Stephen Colbert skinny-dipping with a governor? Howard Stern riding around on the lap of a senator in a wheelchair? This kind of thing reminds me why I’m American by birth but Canadian by choice. 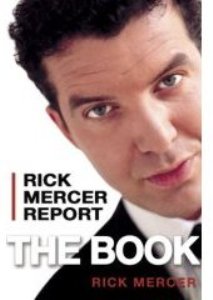 Canadian celebrities not only put up with Rick Mercer, they appear to love him, to fear him even, to court his favour, and to be proud to have their pictures taken with him. This is actually a pretty good barometer of Canada’s tolerance level; on the day when Mercer is successfully sued, charged with insurrection, or fired for insubordination, we all need to run for the hills.

He is such a good watchdog that It’s almost unnerving when Mercer writes about his forays into good works? the charitable foundation he formed with Belinda Stronach, for example, to provide mosquito nets to countries where malaria is both rampant and easily preventable. He also throws his support behind the troops in Afghanistan. It’s like he’s stepping out of character. Do compassion and social activism disqualify him from trickstering? Far from it. It’s part of the job description. Just ask Raven.

Take note, people: activism, not political action. A recurring theme of The Book is the stupidity of all three parties, and no one is spared. So, okay, smart guy, if you had your own party, what would its ideology be? Stand firm? Curb the natural tendencies of greed and powerlust? Maintain a well-financed army? don’t be stupid? don’t be mean? No unnecessary legislation? Fund health care? Laugh at yourself, but take beer seriously?

Forget about it. A coherent ideology will not emerge from Mercer’s mouth or pen. This is a good thing, because an ideology is only a bright and luscious fruit waiting for parasites and bacteria.

The Book lives up to four of The Mindful Bard’s criteria for books well worth reading: 1) it confronts and mocks existing injustices; 2) it renews my enthusiasm for positive social action; 3) it displays an engagement with and a compassionate response to suffering; and 4) it gives me tools enabling me to respond effectively to the suffering around me. 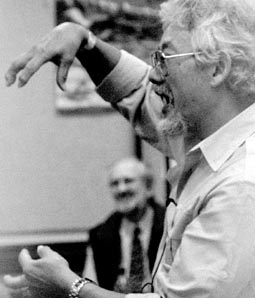