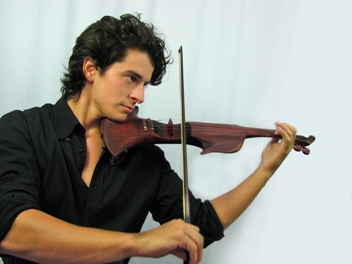 AU students are scattered all over the globe. Take Gonzalo Belmar Ramírez, a musician living in Lima, Peru, who chose Athabasca because its flexibility allows him the freedom to work on his music and other hobbies. He describes the importance of art and music in his life, why a musician would study business management, and how he has combined both. He also explains how he stays motivated despite his hectic schedule.

Music has been a part of Gonzalo’s life from early on. With musician parents, it is not surprising that he began playing instruments at a young age. Now, he sings and plays violin, bass guitar, guitar, piano, and drums. He also studies composition and bass guitar with a local teacher, and is examined once a year.

In addition to playing, Gonzalo is also a composer: in 2005, he wrote an orchestral piece, Bellum (meaning ?war? in Latin), which was performed by a juvenile symphony in Lima. Gonzalo describes it as ?programmatic,? like movie soundtrack music.

Composing a piece involving multiple instruments can be quite complicated. The composer must learn ?not only the . . . range of notes [an instrument] can play,? says Gonzalo, ?but also the different ways these can be used and combined in order to turn into sound what one feels inside.?

Currently, Gonzalo is working on another large-scale musical project: he is writing and recording his first single CD. It’s an orchestral piece, but he is performing all the instruments himself, recording them individually; he will then overlap the music to create a unified sound. It is time-consuming, but Gonzalo is enjoying it.

In addition to music, sculpting, and sports, however, Gonzalo also enjoys business. ?I . . . enjoy making deals [and] creating opportunities,? he says. His interest in the business world was part of the reason he turned down a music scholarship and began studying business at AU. He is currently in the first year of AU’s Bachelor of Arts in Business Administration program.

Gonzalo had begun by studying at a traditional university in Peru. However, ?I just couldn’t take it,? he says. The schedule was rigid, and because the traditional class structure had time gaps between classes, Gonzalo had very little time for his music, art, and sports. He realized he needed something more flexible: Athabasca University.

Although he misses the social interaction that comes with traditional university, Gonzalo feels the end result is well worth it. ?I worked my math, and decided to invest three years of true effort in my future,? he says. ?I’ll have plenty of time to meet people and interact then!?

Gonzalo approaches his courses in an innovative way. Rather than spreading out his classes, he takes one course at a time and focuses solely on that course for a month. This means he is able to complete one course every month. ?In the end it comes down to reading and . . . hard work,? he says.

It isn’t always easy. ?I’m struggling because I’m starting to get used to doing all these things at the same time,? he says.

However, he’s determined to succeed. Creating a schedule has been a lifesaver. ?If I weren’t [organized], I couldn’t make it,? Gonzalo says.

He has drawn up a timetable that allows him to get his course work done, but leaves plenty of room to pursue his interests. ?Instead of having . . . those gaps and having to lose time . . . going and coming back . . . now I can use that time to study music [or] bodybuild,? he notes.

So far, the plan has been working well. To prevent burnout, fitness is a must.

?I go to the gym every day,? says Gonzalo. Moreover, because his music, art, and other hobbies are built into his schedule, he’s able to look forward to them: knowing that art is waiting keeps him motivated as he works through his homework each day.

Additionally, he’s found a way to combine both business and art: he has started his own business, Belmar Arts, selling the art he creates. Gonzalo handcrafts beautiful musical instruments from wood, and has just begun to sell them as part of his business. ?It’s taking off pretty well,? he says.

?I can’t imagine living without art in my life,? Gonzalo says. ?I am very grateful to Athabasca University . . . none of this would be possible at the time if I were studying in another university.?