I have yet to decide whether alt country represents the swan song of American pop music or signals the dawn of a musical renaissance every bit as significant, varied, and amazing as those of the 20s, 60s, and 80s. Either way the magic is flowing out of the south land, the historical incubation zone of American pop music forms.

Cat Power can’t be called alt country per se but she does draw on country singers, country themes, and that beautifully dismal country noir atmosphere to create a sound that is a highly original contribution to this musical movement.

Cat Power is the alias of Chan (Shawn) Marshall, a southern gal with a deep, smoky voice so tightly crammed with emotion she could be Billie Holiday the first time Billie sang at a nightclub to drum up enough cash to keep her ma alive. Chan’s face has already attracted some big wheels in the fashion industry.

Chan Marshall also writes brilliant material (check out ?Metal Heart?), but not long ago made the bewildering announcement that she was tired of doing her own songs. Jukebox remains in this strange Cat Power tradition; only two songs are written by Chan Marshall.

You listen for different things in a cover version than you listen for in the singer-songwriter’s rendition (when all you really have to decide is whether you like the song). With the vocal stylist you consider interpretation, originality, and song choice, among other things.

This is especially true of indie music; we assume that the indie performer isn’t just another assembly-line puppet dangling from the fingers of business executives who secretly despise youth, music, and creativity and are chomping at their bits to impose a corporate agenda on popular culture. We have a right to expect that the indie performer doing cover tunes will nonetheless cultivate an artistic agenda, not one obsessed with numbers.

That’s precisely what you get with Jukebox. It’s hard to believe such vulnerability and depth can emerge from such a laid-back vocal style, but Chan Marshall makes every syllable count, and every rise and fall in pitch breathes meaning into the simplest lyric. Every song is a revelation, and the whole CD is a crazy ride from despair to triumph.

Chan got some of her demons out with this CD, or at least sat them down and gave them a good talking to. These songs plead for the poor, gently scold a cheating man, mourn the loss of a love, and hail the impending arrival of a new one. Cat Power takes a song in real deep before bringing out what sounds like a whole new song. For the songs themselves the process is both renewing and redemptive. 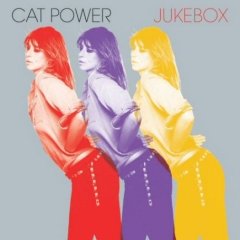 There are things about Chan Marshall that stick in the craw: her former alcohol abuse, for example, and her agreeing to represent a line of jewellery for Chanel. Besides, she doesn’t even seem to want to be a success. After watching so many young folks, numbly determined to launch a stellar musical career, falling through the cracks of a heartless industry it is hard to read about the lackadaisical attitudes and psychological breakdowns that couldn’t hold back Cat Power’s rise to indie cult status.

I’ve said before in this column (notably in a review of a Ron Hynes album) that the artist’s personality is highly susceptible to mental illness and substance abuse because the deliberate expansion of the imagination proportionately increases the experience of suffering without increasing the capacity for suffering.

There is no excuse for self-destructive behaviour; there is, however, cause for rejoicing when the prodigal returns. Deep inside a personal hell spawned by a wounding childhood Chan somehow made contact with a coherent self that rendered her one of the most awe-inspiring musical performers today. And it sure looks like She’s taken the alcohol bull by the horns. Even gotten herself into charity work. As for the Chanel gig, you can’t really call that a sellout; It’s probably easy money, which is just what we creative types need to support ourselves while getting the important stuff done.

Jukebox lives up to five of The Mindful Bard’s criteria for music well worth listening to: 1) it is authentic, original, and delightful; 2) it makes me want to be a better artist; 3) it displays an engagement with and compassionate response to suffering; 4) it reveals a connection with the true self; and 5) it provides respite from a sick and cruel world, a respite enabling me to renew myself for a return to mindful endeavour.