Columns
The Voice
The Mindful Bard – Karen Armstrong, The Bible

?What is Torah?? asked the Bavli. ?It is: the interpretation of Torah.?

Karen Armstrong in The Bible

In the 4th century a great rhetorician was sitting in his garden wrestling with the idea of Christianity. His Christian mother had been praying for him at intervals all day, every day, frequently prostrating herself on the floor; Christian belief was not something he could lightly dismiss. A child’s voice drifted from a neighbouring garden, singing, ?Pick it up and read it.? Immediately he picked up one of Paul’s epistles and began to read, and thus began the enlightenment of the man who came to be known as St. Augustine.

Historian Karen Armstrong has written a succinct biography of the most influential and widely read book in Western civilization. Weaving in and out of Jewish and Christian history, she examines the impact of historical contexts on how each biblical book was produced, studied, translated, and revised, and on whether or not they were included in the canon.

Armstrong shows that, from the beginning, readers and hearers of scripture have tried to understand holy writ by relating it to personal experience, to the immediate and salient evidence of their surroundings and the events unfolding in their own lives.

This is the best piece of writing on the Bible that I’ve read since Northrop Frye’s The Great Code: The Bible and Literature. Like Frye, Armstrong insists that mythos is a mode of language meant to be profoundly meaningful but not factual. As with several other interpretation problems, we get hitched up when we demand modes of understanding from ancient scripture which ancient scripture itself does not recognize. 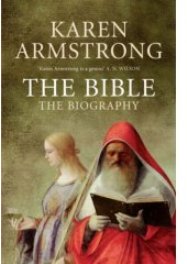 Today, literal interpretation of the Bible remains a problem, and not only a theological one; it reaches into social and political life as well, as Biblical prophecies and injunctions are used to justify acts of violence and selfishness that the Bible’s central message denounces.

The most progressive way of reading scripture is in fact one of the oldest traditions in scriptural study. In pointing the way to a redemptive use of scripture in our own time Armstrong refers us to Rabbis Hillel, Akiba, and Johanen, near contemporaries of Jesus, who claimed that charity was the secret flame within scripture that the scholar must draw out, a concept presaging Augustine’s dictum that “an exegete must always seek the most charitable interpretation of a text.? The Kabbalah mystics would agree with Northrop Frye that scriptural study is a means by which we allow divinity to draw nearer.

?The major religions all insist that the practice of daily, hourly compassion will introduce us to God, Nirvana, and the Dao. An exegesis based on the ?principle of charity? would be a spiritual discipline that is deeply needed in our torn and fragmented world? (Armstrong, p. 229).

Armstrong sees a love-centred reading of scripture as part of a necessary antidote to what she calls the ?nihilistic ruthlessness at the heart of modern culture.? She pulls no punches when it comes to pointing out the many problems with the Bible itself and the harm that has been done in the world with alleged scriptural support, and yet by sensitively chronicling the depth of spiritual fervour with which scholars and teachers produced, revised, translated, and commented on scripture Armstrong has effectively silenced the common charge that the Bible is the work of a pedantic conspiracy bent to the will of a racist patriarchy.

The Bible lives up to four of The Mindful Bard’s criteria for books well worth reading: 1) it confronts and rebukes existing injustices; 2) it displays an engagement with and compassionate response to suffering; 3) it inspires an awareness of the sanctity of creation; and 4) it speaks of an attainment of the true self.